Talimogene laherparepvec (T-VEC) is a genetically engineered oncolytic virus used in intralesional therapy for stage IIIB/C and IV melanoma. It has been shown to be a safe and efficacious monotherapy for the treatment of advanced melanoma in phase I and II clinical trials, as well as to provide a durable response rate with the most significant impact on stage IIIB/C and IVM1a melanoma in a phase III clinical trial. Currently, T-VEC is being studied in combination with other immunotherapies and preliminary data show promising results. The aim of this article is to present and review previous and current clinical data on the use of T-VEC in advanced melanoma.

Melanoma is an aggressive and deadly cutaneous malignancy with an overall estimated annual percentage increase in occur-rence ranging from 1.5% to 2.3% in 2015. Melanoma was also responsible for an estimated 9940 deaths in 2015.1 The treatment of choice for early-stage, localized melanoma has typically been surgical resection. Five-year disease-specific survival rates for stage I and II melanoma, as illustrated by the American Joint Committee on Cancer, range from 97% to 53%; however, the prognosis for patients with regional (IIIB/C) and distant metastasis has been dismal, with 5-year survival rates as low as 19%.2 Newer modalities of treatment, such as immunotherapy and targeted therapies, have seen great advancement over the last 5 years. The development of these new therapies has led to improvements in overall survival (OS) and prolonged progression-free survival (PFS) in patients with locoregionally advanced or distant metastatic disease.3

There has been a dramatic increase in the development of treatment options for stage III and IV melanoma. Several drugs have been FDA-approved for use in metastatic melanoma. These include vemurafenib and dabrafenib, which are molecular-targeted therapies for patients harboring BRAF or KT mutations and the MEK inhibitors trametinib and cobimetinib. The others include immune checkpoint inhibitors that target cytotoxic T-lymphocyte-associated antigen-4 (CTLA-4) and programmed-death receptor-1 (PD-1), such as ipilimumab, nivolumab, and pembrolizumab.4-8

Another area that is changing the landscape in the treatment of metastatic melanoma is the use of intralesional therapy. Coley et al first developed intralesional therapy in 1893 when regression of a locally advanced tumor was seen after injection of a bacterial toxin.9 Since treatments are injected directly into the lesion, higher concentrations can be used with less risk of overall systemic toxicity. Another advantage is a potential “bystander ef-fect,” where a systemic response is induced and untreated lesions show regression. Unfortunately, this has only been seen with se-lect intralesional therapies such as PV-10.10-12

A novel form of intralesional therapy that has shown therapeutic benefit in metastatic melanoma is the administration of oncolytic viruses. Talimogene laherparepvec (T-VEC, trade name: Imlygic), previously known as OncoVex, is an engineered, immune-enhanced herpes simplex virus type 1 (HSV-1) virus with oncolytic properties. The deletion of the ICP47 gene allows for antigen presentation and also enables the virus to grow and replicate within tumor cells.13 The neurovirulence coding sequence is replaced with granulocyte-macrophage colony-stimulating factor (GM-CSF). This promotes dendritic cell activity and increased tumor antigen presentation, which could lead to a more robust systemic response through the activation of cytotoxic T cells (Figure 1).14,15 The aim of this article is to discuss the role and clinical efficacy of T-VEC in the treatment of metastatic melanoma, as well as ongoing clinical trials that combine T-VEC with other immunotherapies. 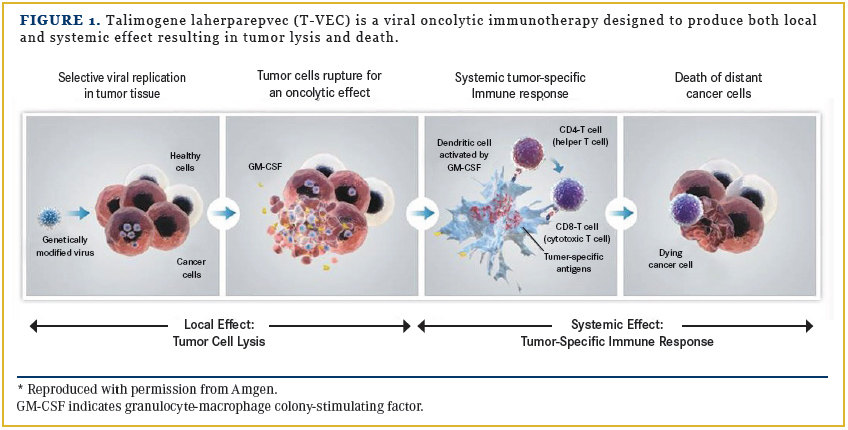 T-VEC has been extensively tested in phase I, II, and III clinical trials.14,17-18 Its safety and clinical activity was initially established in multiple tumor types, including melanoma in a phase I trial conducted by Hu et al.16 This was followed by a single-arm phase II clinical trial conducted by Senzer et al, which was designed to establish clinical efficacy in stage IIIC and IV metastatic melanoma. Fifty patients over a 2-year period were identified and included in the study (IIIC-10, IVM1a-16, IVM1b-4, and IVM1c-20). Prior systemic therapies, which included chemotherapy or Inter-leukin-2 (IL-2), were documented in 74% of the patients. The treatment protocol involved intratumoral injection of injectable cutaneous, subcutaneous, or nodal lesions with up to 4 mL of 106 PFU/mL, and after 3 weeks followed by 4 mL of 108 PFU/ mL every 2 weeks, up to a maximum of 24 treatments. A set of tumors was injected at each visit, with a set including at least 10 tumors. Patients received a median of six bi-weekly injections.

The authors reported an overall response rate (ORR) of 26% by Response Evaluation Criteria in Solid Tumors (RECIST). Of the 13 patients who responded, 5 experienced a partial response (PR) and 8 had a complete response (CR). Twelve of the 13 patients experienced a response that lasted from 7 to 31 months, with responses being reported in both injected and uninjected visceral lesions. The 13th patient developed brain metastasis 1 month after experiencing a response. The median follow-up was 18 months (range 11-36 months). The authors reported 1- and 2-year OS of 58% and 52%, respectively.14 These results lead the FDA to approve T-VEC for a pivotal phase III study.

T-VEC was further tested in a multicenter, open-label phase III trial in which patients with unresectable stage IIIB and IV melanoma received either intratumoral T-VEC or subcutaneous GM-CSF. The OncoVex Pivotal Trial in Melanoma (OPTiM) enrolled 436 patients, with 295 being randomized to T-VEC and 141 patients to GM-CSF over a 2-year period. The primary endpoint of the study was the durable response rate (DRR), which was defined as an objective response (CR or PR) lasting

≥6 months that began within 12 months of initiation of therapy. The authors reported ORR, OS, and safety as secondary endpoints. The treatment regimen for T-VEC was similar to the protocol used in the previous phase II trial (Figure 2).17

Based on the results from the phase I, II, and III trials, T-VEC monotherapy is safe, with a favorable toxicity profile of mainly influenza-like symptoms, and clinically effective, with a DRR of 26%.17 The studies have also demonstrated a potential benefit in uninjected and visceral lesions, although responses seen in some visceral lesions, including the lungs, have been infrequent. Since other immunotherapies have garnered interest with eventual approval for distant metastatic melanoma, T-VEC has been primarily used to treat stage IIIC and IVM1a disease.17,18 T-VEC was approved by the FDA based on the significant increase in DRR as proposed in the primary aim for the trial in the OPTiM study and is now listed in the 2016 National Comprehensive Cancer Network clinical practice guidelines as an option for intralesional injection in stage III, in-transit melanoma, and unresectable metastatic melanoma.19

One potential way to further enhance the immune response is through the combination of T-VEC with currently available immunotherapies. This premise was based on a study by Engeland et al, who demonstrated enhanced oncolytic viral therapy with CTLA-4 and PD-1 checkpoint blockade.20 Puzanov et al then enrolled 19 patients in a phase IB multicenter trial to evaluate the safety and efficacy of T-VEC + ipilimumab, a monoclonal antibody against CTLA-4 (NCT01740297). The regimen of intralesional T-VEC used consisted of 4 mL of 106 PFU/mL at week 1, which was increased to 4 mL of 108 PFU/mL at week 4, and then every 2 weeks after that. Ipilimumab (3 mg/kg IV) was given every 3 weeks for 4 infusions. The median treatment duration with T-VEC was 13 weeks. Eighteen patients were assessed, and an overall response was seen in 9 patients (50%) (95% CI).

The authors also reported a confirmed CR in 4 patients (22%) and a confirmed PR in 5 (28%), while 4 patients (22%) had stable disease per immune-related response criteria. There were no dose-limiting toxicities (DLTs) noted during the DLT evaluation period. Five patients (26%) experienced a grade 3 AE due to T-VEC or ipilimumab, while two grade 4 AEs were seen in a patient with elevated amylase and lipase, which was attributed to ipilimumab. Only one grade 5 event was observed: central nervous system metastasis.21 The phase II portion of the study is currently enrolling patients to receive T-VEC + ipilimumab or ipilimumab alone, with a primary endpoint of OS.18,21

Another current multicenter, open-label trial is assessing the dose-limiting toxicities of T-VEC and pembrolizumab, a PD-1 blocking antibody, in stage IIIB and IV melanoma with enrollment that began in December of 2014 (NCT02263508). Phase III will compare the PFS and OS, and will be randomized 1:1 to T-VEC + pembrolizumab versus placebo + pembrolizumab alone. The estimated date of study completion is May 2022. The secondary objectives will include assessing and reporting the DRR, overall response, and AEs.

T-VEC is a genetically modified HSV-1 with oncolytic properties that has been used in the treatment of advanced melanoma. It has been shown to be effective as a single agent in intralesional therapy, with a significant increase in DRR of 16% versus 2% with GM-CSF, with the most clinical efficacy being seen in stage IIIB/C and IVM1a disease. T-VEC is currently being evaluated in clinical trials in combination with other systemic immuno-therapies, with early results showing a safe and potentially increased response rate compared with monotherapy immunother-apy treatments in metastatic melanoma.

Affiliation: Jonathan S. Zager, MD, FACS, and Matthew P. Do-epker, MD, are from Moffitt Cancer Center, Tampa, FL. Disclosures: Dr. Zager is a consultant, on the speakers bureau, and has received past research support from Amgen. 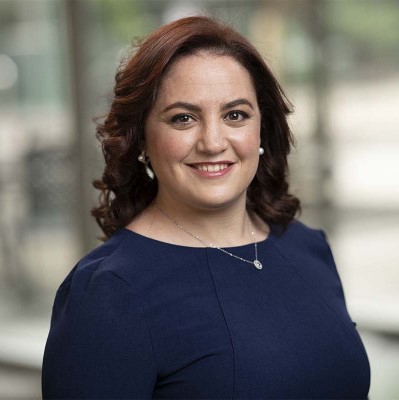