Acute postsurgical pain continues to be difficult to manage in patients who undergo breast cancer surgery. Poorly controlled pain can lead to poor patient satisfaction, increased length of stay, and increased risk of opioid adverse events, and may be a factor in the development of chronic pain. A multimodal analgesic regimen that consists of 2 or more nonopioid medications and is initiated in the preoperative phase and continued during the intraoperative and acute postoperative phases may provide the best patient outcomes. These nonopioid medications include, but are not limited to, local anesthetics, acetaminophen, nonsteroidal anti-inflammatory drugs, antiepileptics, alpha-2-adrenergic antagonists, N-methyl-D-aspartate antagonists, and glucocorticoids. This multimodal approach can be a stand-alone protocol or a part of a more comprehensive enhanced recovery after surgery (ERAS) protocol.

Postoperative pain control remains a common problem for patients undergoing breast cancer surgery. A recent survey showed that patients’ number one concern leading up to surgery is pain.1 Uncontrolled, acute postoperative pain can lead to an increased surgical stress response. This then has an effect on endocrine, metabolic, inflammatory, and immune functions, which can further stress various organ systems.2 Appropriate pain control can lead to improved postoperative outcomes as well as decreased pulmonary and cardiac complications.3,4 In addition, uncontrolled acute postoperative pain is associated with longer stays in the postanesthesia care unit, longer hospital stays, decreased patient satisfaction and quality of life, and increased costs.5-8 Furthermore, while multifactorial in nature, the incidence of chronic pain may be decreased by an aggressive multimodal approach in the acute postoperative setting.9,10 As many as 4% to 63% of patients suffer chronic pain after mastectomy,11-13 and as such, effective acute pain control remains paramount to patient recovery following breast cancer surgery.

The mainstay of perioperative pain control has been opioids. However, opioids are associated with significant risks and adverse effects (AEs) such as pruritus, constipation, nausea/vomiting, urinary retention, oversedation, and respiratory depression.14 A recent sentinel event alert by The Joint Commission expressed the need for safe use of opioids in the hospital setting.15 This alert identified those most at risk for respiratory depression, including patients with obstructive sleep apnea or those who are opioid-naïve or obese, which are common characteristics of patients undergoing breast cancer surgery. Furthermore, opioid abuse is an ever-increasing problem in the United States. A recent survey in 2010 showed that 5.1 million US citizens had used opioids illicitly within the past month.16 Finding ways to minimize opioids in the treatment of perioperative pain may not only decrease AEs, but also decrease the exposure and subsequent misuse of opioids in society.

A multimodal approach has been used for perioperative pain control in various surgical procedures. Multimodal analgesia is the use of more than 1 class of nonopioid medication to reduce pain and minimize the AEs of any 1 class of pain medication.17 These medications act via different mechanisms and produce a synergistic effect on acute pain control. A successful multimodal protocol requires coordination between all phases of care: preoperative, intraoperative, and postoperative. Furthermore, the surgical, anesthesia, and nursing teams must all work together to ensure that all aspects of the multimodal plan are followed.

The Table lists a sample multimodal approach for breast cancer surgery. A preoperative regimen could consist of an antiepileptic medication, such as gabapentin or pregabalin, acetaminophen, and regional anesthesia. Preemptive analgesia ensures that the medication given is active before and during surgery.7 This also may decrease afferent transmission of pain signals and decrease acute postoperative pain.18 Several studies have shown opioid reduction and decreased acute and chronic pain using preemptive antiepileptics such as gabapentin or pregabalin.19-22 Regional anesthesia for breast cancer surgery could be either paravertebral blocks, pec blocks, or a thoracic epidural injection.23-29  These blocks can be either a single-shot block or a continuous infusion via catheter. Several studies have shown  decreased  postoperative  pain  when these regional techniques are used for breast surgery. If a transverse rectus abdominis muscle (TRAM) or deep inferior epigastric perforator (DIEP) flap is performed, the use of transversus abdominis plane block (TAP) has also been shown to decrease postoperative opioid use and pain scores.30 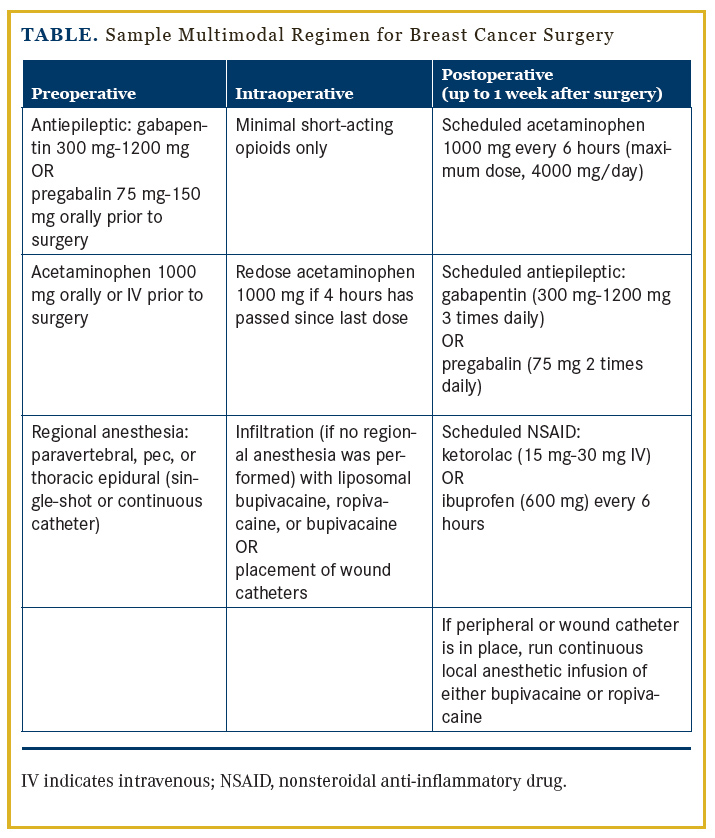 The postoperative pain regimen should consist of scheduled acetaminophen, scheduled antiepileptics, scheduled nonsteroidal anti-inflammatory drugs as soon as allowed, and intermittent short-acting opioids. This postoperative regimen should be continued for up to 1 week after surgery. In addition, complementary therapies such as acupuncture, aromatherapy, and healing touch can be offered to the patient. If a continuous catheter is in place, the infusion should consist of, at minimum, a local anesthetic and should be used in the acute postoperative period.

In  addition  to  the  medications  listed  in  the  preceding paragraphs and the Table, several other classes of medications can  also  be  used  pending  patient  selection.  Intravenous lidocaine has been used to decrease acute postsurgical pain in many surgical populations.36,37  N-methyl-D-aspartate (NMDA) antagonists such as ketamine and magnesium may play a role in  central  sensitization.  The alpha-2-adrenergic antagonists clonidine and dexmedetomidine have been used in multimodal approaches in other surgical procedures with success, as they primarily act at the substantia gelatinosa of the spinal cord. Finally, glucocorticoids such as dexamethasone have been used to minimize inflammation and postoperative pain.

A comprehensive multimodal pain regimen will provide the patient with the most complete pain control. It will minimize opioids,  which  not only will  minimize  opioid-related  AEs and  opioid misuse, but may decrease  cancer  recurrence.38 A  retrospective  study  by  Exadaktylos  et  al39 showed  that paravertebral anesthesia and analgesia  decreased  breast cancer recurrence rates. Prospective studies have shown that paravertebral anesthetics, as opposed to general anesthetic with opioids and inhalation anesthetics, resulted in increased natural killer cell cytotoxicity as well as increased apoptosis in estrogen receptor–negative breast cancer cells.40,41

In conclusion, this review of a multimodal approach to acute postsurgical pain can provide a framework for managing patients’ pain after breast cancer surgery. This could be used alone or in combination with an enhanced recovery after surgery (ERAS) protocol to improve patients’ postsurgical outcomes. However, future prospective randomized studies are needed to determine the exact combinations and dosages of multimodal medications to provide the optimal benefit for patients.

Affiliation: Dr Hutchins is from the University of Minnesota Department of Anesthesiology.