Small node–negative breast cancers measuring less than 1 cm (pT1a/bN0) are generally associated with a favorable prognosis. However, as many as 10% of these breast cancers exhibit human epidermal growth factor receptor 2 overexpression and/or amplification (HER2+). Chemotherapy + trastuzumab is the accepted adjuvant therapy for early HER2+ breast cancers as it lowers the risk of recurrence and mortality, but virtually all patients enrolled in the pivotal trials for this therapy had a higher stage of disease. Several large retrospective reviews have reported a lower overall survival among HER2+ cases in the pT1a/bN0 patient group. The use of chemotherapy with trastuzumab has increased significantly despite the lack of direct evidence for the efficacy of trastuzumab in pT1a/bN0 breast cancers. This review addresses the current data regarding the prognosis of pT1a/bN0 breast cancers and outcomes of patients receiving HER2-targeted therapy.

Human epidermal growth factor receptor 2 overexpression (HER2+), an oncogenic receptor and poor prognostic factor, is found in 15% to 20% of all breast cancers. Although less frequent, HER2+ is found in as many as 10% of node-negative breast cancers less than 1 cm (ie, pT1a/bN0).1-3 HER2-targeted therapy with trastuzumab and chemotherapy has significantly lowered recurrence and mortality risk in the treatment of early-stage HER2+ breast cancers, but very few patients with pT1a/bN0 tumors were enrolled in the key trials. Therefore, the management of small node–negative HER2+ breast cancer remains unclear as small node–negative breast cancers are generally associated with a favorable prognosis and trastuzumab-based treatment can result in both short- and long-term complications. Despite the lack of robust evidence, there had been a significant increase in the use of chemotherapy with trastuzumab in these patients over the last decade.4 In this article, we will review the literature of pT1a/bN0 HER2+ breast tumors and the efficacy of trastuzumab in these patients.

HER2 overexpression has both prognostic and predictive value. Patients with HER2+ tumors have a higher risk of recurrence. Small node–negative breast cancer, especially those <1 cm, generally carries a favorable prognosis. One of the first studies to suggest HER2+ as a risk factor for recurrence in this subset was a Finnish study published in 2003.5 In this retrospective review of 852 patients with stage I breast cancer, 313 patients had pT1a/bN0M0 tumors. HER2 status was documented in 194 patients. Among these patients, those with moderately or poorly differentiated breast tumors had lower distant disease-free survival (DDFS) only if their tumors were HER2+ (9-year survival, 92% vs 67%; P = .003). 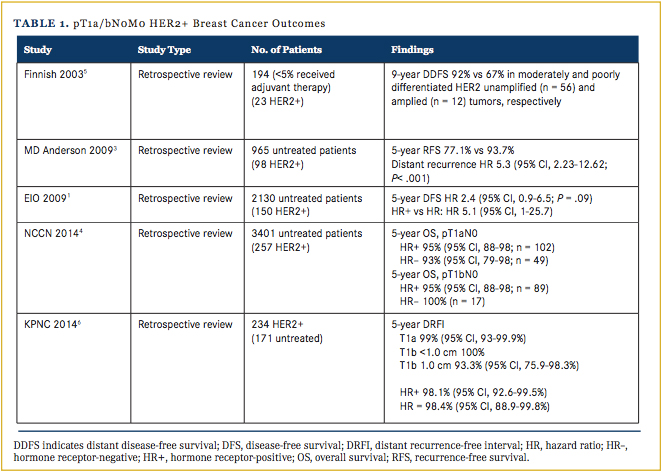 The Kaiser Permanente Northern California (KPNC) tumor registry also identified 171 patients with untreated HER2+ pT1a/bN0 breast tumors. A lower 5-year distant recurrence–free interval (DRFI) was reported in patients with T1bN0 HER2+ tumors measuring 1 cm compared with smaller tumors.6 The 5-year DRFI was 99% (95% CI, 93-99.9%), 100%, and 93.3% (95% CI, 75.9-98.3%) for T1a, T1b measuring less than 1 cm, and T1b measuring 1 cm, respectively. Similar to the NCCN database review, the 5-year DFRI did not appear to be different between the hormone receptor–positive and hormone receptor–negative patients (98.1% vs 98.4%). In summary, retrospective outcomes series of pT1a/bN0 HER2+ breast tumors show wide ranges in outcomes, with some, though not all, suggesting a higher recurrence risk in HER2+ compared with HER2– cases—overall, still an excellent outcome. It is important to determine baseline recurrence risk, as the benefit of systemic adjuvant therapy is generally proportional to the risk.

Several large randomized multicenter studies have shown that the addition of trastuzumab to chemotherapy results in decreased recurrence and better OS. This knowledge has led to new standards for, and widespread use of, trastuzumab-based therapy for early-stage HER2+ breast cancer.7-9 However, none of the 4 pivotal studies included patients with pT1a/bN0 breast cancers, with the exception of the BCIRG-006 trial, which included T1a/b breast tumors. Although not specifically mentioned, these tumors were likely node-positive. Nevertheless, at present, there is lack of data from controlled studies regarding the efficacy or magnitude of benefit of adjuvant trastuzumab for pT1a/bN0 breast cancers.

In a French multicenter retrospective review of 276 cases of pT1a/bN0 HER+ breast tumors, 129 patients (47%) were treated with adjuvant trastuzumab-based chemotherapy (ATBC+), 19 with chemotherapy alone, 5 with trastuzumab alone, and 123 (45%) with neither trastuzumab nor chemotherapy (ATBC–).10 The receipt of ATBC was significantly associated with hormone receptor–negative status, high Ellston-Ellis (EE) grade, tumor size, and patient age. Despite this selection bias, there were only 2 recurrences in the ATBC+ group but 13 in the ATBC– group at a median follow-up of 44 months, with a 40-month DFS of 99% and 93%, respectively (P = .018).

A prospective randomized trial of trastuzumab-based treatment would ideally support the potential benefit of this approach in patients with pT1a/bN0 HER2+ breast cancers. Until recently, no such studies had been conducted due to several limitations, such as low incidence, which could limit recruitment of participants; ethical concerns about involving a no-treatment placebo group; and concerns about potential long-term toxicities in women with a good prognosis. In view of these challenges, Dana-Farber Cancer Institute designed a phase 2 prospective, nonrandomized study of weekly adjuvant paclitaxel in combination with trastuzumab (APT) for 12 weeks, followed by maintenance trastuzumab for 1 year in patients with node-negative HER2+ breast cancer measuring 3 cm or less.11,12 A total of 201 of the 406 study participants had pT1a/bN0 breast cancers. The 3-year DFS in this group was 99.5%, a proportion significantly higher than the historical data from the MD Anderson series, among others. An ongoing randomized phase 2 trial (ATEMPT Trial) is comparing the Dana-Farber APT regimen with the immunoconjugate ado-trastuzumab emtansine (T-DM1) given every 3 weeks for 17 cycles for patients with HER2+ stage I breast cancer.13 The primary end points of this trial are DFS (assessed at 2 years) and safety, and the design calls for a 3:1 randomization favoring T-DM1 and an accrual of 500 patients.

Cardiac events are the adverse events (AEs) of greatest concern for HER2-targeted therapy, especially when small benefits in outcome are projected. Pivotal trials of HER2-targeted therapies have shown heterogeneity in their definitions of cardiac AEs, but each trial consistently reported an increase in cardiac AEs.14,15 In the NSABP-B31 and NCCTG-N9831 trials, the cumulative incidence of congestive heart failure at 7 years of follow-up was 4% with trastuzumab given concurrently with chemotherapy and after anthracycline compared with 1% with chemotherapy alone.14 In the HERA trial that used trastuzumab following all chemotherapy, the incidence of New York Heart Association (NYHA) III/IV congestive heart failure was 0.8% compared with 0% in the control group, and 5.2% of patients had to discontinue trastuzumab due to cardiac AEs.15 Templeton et al conducted a pooled analysis of these pivotal trials showing an absolute increase of 1.8% for grade 3 or 4 cardiac toxicity (2.1 vs 0.3%), with an odds ratio of 7.6 (95% CI, 4.4-13.1; P <.001).16 Cardiac AEs are more likely following prior use of anthracycline. This was shown in the BCIRG-006 trial where congestive heart failure and cardiac dysfunction were significantly more common in the group receiving AC-TH (2.0%) than the group receiving TCH (0.4%; P <.001) or AC-T (0.7%).9 Although most cardiac AEs are reportedly transient, the BCIRG-006 trials demonstrated a significant difference in sustained, subclinical loss of mean LVEF (defined as >10% relative loss) in the group receiving AC-TH (18.6%) compared with AC-T (11.2%) and TCH (9.4%) (P <.001).9 In the APT trial, Tolaney et al reported that only 2 patients (0.5%) developed symptomatic congestive heart failure after treatment with paclitaxel/trastuzumab combination, and both cases resolved after discontinuation of trastuzumab.11

In addition, trastuzumab is associated with infusion reaction in up to 40% of patients.17 Other common adverse reactions include diarrhea and infection.

Toxicities reported from clinical trials may underestimate AE rates, as they tend to enroll healthier and more highly resourced patients. A population-based retrospective study showed a 5-year cumulative incidence of heart failure as high as 20% (95% CI, 14-25.6%) in patients treated with anthracycline and trastuzumab.18 In the SEER-Medicare data review, 2028 patients 66 years or older were included. Among these patients, 1.2% and 1.7% were hospitalized with heart failure during trastuzumab treatment and in the year after treatment, respectively. Patients who had a history of cardiac disease had a higher likelihood of requiring a cardiac admission during treatment (9.6% vs 2.7%; P <.001).19

It is estimated that a year of adjuvant trastuzumab alone will cost $57,000. This does not include the additional cost of cytotoxic partner drugs, surveillance, management of cardiac toxicity, physician visits, and travel expenses.20 Although adjuvant trastuzumab in HER2+ breast cancer is undoubtedly cost-effective,21,22 it is unclear whether the cost-effectiveness extends to pT1a/bN0M0 HER2+ tumors given the overall low recurrence risk and small impact on outcome. In the face of rising healthcare costs, the cost-effectiveness of adjuvant trastuzumab therapy in patients with pT1a/bN0M0 HER2+ breast cancer is a significant consideration that will require further analysis and modeling of available and pending data.

Although pT1a/bN0M0 breast cancers are associated with favorable prognosis, HER2 overexpression in these patients certainly carries a worse prognosis with more distant recurrences and lower OS rates. HER2 overexpression has been associated with a DFS as low as 67%5 and as high as 100%.4 It is challenging to make an accurate prognosis of this group of patients due to the lack of robust data. Which factors contribute to the large difference in reported prognosis is unclear. A higher histological grade, negative hormone–receptor status, and/or the larger tumor size associated with HER2 positivity have been cited as possibilities. Fehrenbacher reported that T1b tumors measuring 1 cm clearly had worse DRFI compared with other pT1a/bN0M0 HER2+ breast cancers.6 Adjuvant trastuzumab has been associated with excellent survival,10-12 but the benefit attributable to trastuzumab has not been confirmed, nor has the magnitude of the benefit been estimated in a randomized trial. Given the overall good prognosis in this group of patients, the absolute benefit from adjuvant HER2-targeted therapy is likely small. Thus, the decision for treatment should entail a discussion of risk and benefit between the physician and patient, especially patients with T1b breast cancers with poor risk features (eg, tumors measuring 1 cm, high histological grade, and/or hormone receptor–negative status). This discussion could include benefit estimated using the natural history of untreated pT1a/bN0 HER2+ cancers. Moving forward, we will need a more reliable method to identify patients with high-risk pT1a/bN0M0 HER2+ who will benefit from treatment. Perhaps the 70-gene expression profile assay (Mammaprint) could be a useful tool, as the validation of this assay included HER2+ tumors, such that low-risk hormone receptor–positive tumors could be recommended for adjuvant hormonal therapy alone. However, this assumption should be tested using data from past or ongoing trials. In addition to benefit prediction assays, regimens with a more favorable toxicity profile, ideally nonanthracycline-based or even chemotherapy-free, need to be evaluated in order to improve the risk-benefit ratio for this category of patients.