Metastatic breast cancer, despite many medical advances, remains an incurable disease. Therefore, treatments that overcome cancer cell resistance to current treatments are needed to decrease relapse and onset of metastatic disease. Aurora-A kinase has been implicated in breast cancer tumorigenesis and progression of the disease. It has also been shown to play a role in increasing a more chemotherapy-resistant, mesenchymal phenotype, and cells with stem cell-like characteristics. Pre-clinical data have been encouraging with inhibitors of Aurora-A kinase signaling, showing decreased proliferation and increased sensitivity of breast cancer cells to both hormonal and chemotherapy treatments. In early clinical trials with Alisertib, the most clinically advanced Aurora-A inhibitor, there have been early signals of activity, especially in the HR+ and HER2-positive breast cancer patient population. There is ongoing research in developing further specific Aurora-A and pan-Aurora kinase inhibitors and to identify biomarkers to show appropriate patient population for treatment. The first breast cancer-specific clinical trial with an Alisertib and Fulvestrant combination has completed accrual, and we are eagerly awaiting data to confirm that Aurora-A kinase inhibition has a role in the treatment of breast cancer.

Breast cancer, despite many medical advances, remains a major health problem in the United States and worldwide. De novo and acquired resistance to systemic therapy remains a significant issue contributing to poor clinical outcomes. It is most evident in patients with metastatic disease, as these breast cancer cells develop resistance to sequential therapies, ultimately leading to disease progression and death. Novel approaches to both prevent and overcome resistance to breast cancer therapies are in development and urgently needed.

Aurora-A kinase (AURKA) belongs to the family of serine-threonine kinases that play an integral part in cell cycle regulation by recruiting the cyclin B1/CDK1 complex and committing cells to mitosis.1-3 AURKA overexpression in murine fibroblasts and breast epithelial cells results in centrosome amplification and aneuploidy, suggesting it plays an important role in malignant transformation.4,5 AURKA is expressed in multiple carcinomas including breast cancer.6-9 AURKA overexpression has been associated with centrosome amplification and DNA instability.10-12 It has been proposed that cancer cells may overexpress AURKA through a switch in mRNA transcription through cap to internal ribosome entry site (IRES)-dependent translation, which allows for change in transcriptional regulation and increased mRNA production.13 The non-mitotic function of AURKA has been implicated in breast cancer progression and resistance to chemotherapy agents through epithelial to mesenchymal transition and the acquisition of stem cell-like characteristics.14,15 Breast cancer cells with stem cell-like properties have been associated with resistance to standard therapies, tumor progression and onset of distant metastasis.16-19 AURKA can activate NOTCH signaling, a pathway implicated in breast cancer cells acquiring stem cell-like properties.15,20 The NOTCH pathway has furthermore been shown to be important in mammary carcinomas in tumorigenesis,21 development of resistance to endocrine treatments,22 and cross-talk with the HER2 signaling pathway.23,24 Therefore, increasing interest in targeting AURKA for the treatment of breast cancer has evolved. There are several compounds targeting AURKA in clinical development, with the most advanced being alisertib (MLN8237), a selective AURKA inhibitor. Other compounds, targeting AURKA selectively or as part of their broader activity, are under evaluation in pre-clinical and early clinical testing (Table 1).25 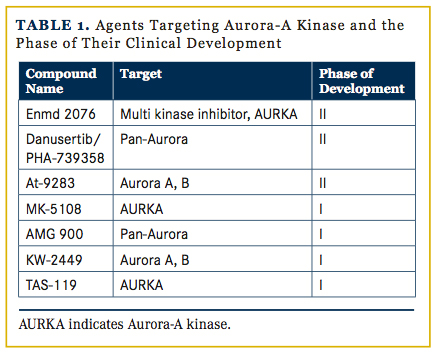 Increased expression of both mRNA and protein correlates with worse clinical outcomes in patients with estrogen receptor positive (ER+), HER2-negative breast cancer; in cohorts of triple-negative breast cancer, the same analyses have yielded mixed results.26-30 AURKA has been identified as a relevant therapeutic target in ER+, endocrine resistant, breast cancer cell lines in a genetic screen by Thrane et al.31 Experimental testing has shown that AURKA activation has been associated with resistance to endocrine therapies in ER+ breast cancer models.32-34 Aurora-A and B have been identified through the kinase inhibitor screen as targets for the treatment of aromatase inhibitor-resistant breast cancer cells.34 One proposed mechanism of AURKA causing resistance to endocrine therapies is down-regulation of the ERα through expansion of a sub-population of ERlow/- tumor-initiating cells.32 An alternative proposed mechanism is through direct phosphorylation of ERα.33 Importantly, inhibition of AURKA either resulted in growth arrest or restored sensitivity to estrogen blockade in ER+ breast cancer cells and increased efficacy of hormonal therapies in in vitro and in vivo models of ER+ breast cancer.32-34

Inhibition of AURKA results in reversal of mesenchymal phonotype and reduction of cancer stem cell-like cells with increased sensitivity to chemotherapy agents.14,35 The combination of AURKA inhibitors with chemotherapy was much more effective than either treatment when compared in various breast cancer models with anthracyclines36 and taxanes.37 AURKA inhibitors may target cancer cells with increased propensity for metastasis and treatment-resistance either directly or through interference with the NOTCH signaling pathway.

Alisertib is an orally administered, small molecule inhibitor highly selective for AURKA.38 The safety and tolerability of alisertib has been investigated in multiple phase I clinical trials in patients with hematologic and solid malignancies. In a first-in-human trial performed by Dees et al, 87 patients with solid malignancies (3 with breast cancer) were treated at escalating doses of 2 different formulations of alisertib from 5 mg to 150 mg twice daily for 7, 14, or 21 consecutive days followed by 14 days of recovery. The recommended phase II dose (RP2D) was 50 mg twice daily for 7 days with a 14-day recovery. The most common adverse events were fatigue, nausea, and neutropenia. Twenty patients achieved stable disease (SD) for a period greater than 3 months, with 1 patient achieving partial response lasting for over a year.39 Cervantes et al corroborated the RP2D results in a separate, dose escalation phase I study in 59 adults with advanced solid malignancies (one with breast cancer).40 Pharmacokinetic studies revealed fast absorption, and at the RP2D the steady-state concentration exceeded that associated with saturating pharmacodynamic effects and preclinical activity. There was one partial response, and 22 (37%) patients achieved SD, 6 of whom (10%) maintained it for a period > 6 months.40 A third phase I trial of 58 patients with refractory hematologic malignancies supported the same RP2D, and it further determined enteric coated tablets to be the preferred formulation.35 Hematological toxicities were the most frequent dose-limiting toxicities (DLTs), particularly neutropenia. There were also DLTs of stomatitis and skin toxicities.35,39,40

A phase II trial reported by Melichar et al investigated the efficacy of single-agent alisertib in patients with pre-treated breast cancer, small-cell lung cancer, non-small-cell lung cancer, head and neck squamous cell carcinoma, and gastro-esophageal adenocarcinoma.41 There were 53 patients with breast cancer treated and 49 were evaluable for response. Of these, 26 patients had hormone receptor positive (HR+), HER2-negative breast cancer, 9 had HER2-positive breast cancer, and 14 had HR-negative, HER2-negative breast cancer. The majority of the breast cancer patients (80%) had received 4 or more prior treatment regimens. Of all patients, 9 (18%) had an objective response. Of those with HR+ disease, 6 (23%) had an objective response, 8 (31%) achieved SD at least 6 months, and PFS was 7.9 months. In the small HER2-positive cohort, response rates were similar though the duration of response was longer at 11.2 months, an impressive finding given the absence of concurrent HER2-directed therapy. In this heavily pre-treated population, the overall results were very encouraging and the authors concluded that further investigation was recommended, especially in HR+ and HER2-positive patient populations.41

In 2014, a phase I trial of alisertib in combination with fulvestrant in endocrine-resistant breast cancer (NCT02219789) was the first dedicated breast cancer trial with an AURKA inhibitor to be open to enrollment; this trial remains active but is no longer recruiting.

Other active and planned trials specifically in the breast cancer patient population are listed in Table 2. Alisertib has been combined with taxanes in early clinical trials that form the basis for future trials in patients with breast cancer, and specifically with triple-negative breast cancer (TNBC).42,43

There are promising data to support the development of breast cancer therapeutics targeting the inhibition of Aurora kinase. Promising single-agent activity has been observed with the selective Aurora-A kinase inhibitor alisertib, and there is particular interest to evaluate these agents in combination with endocrine therapy in HR+ disease and with HER2-directed therapies in HER2+ disease, given the non-overlapping toxicities. Beyond the molecular subtypes of breast cancer, the pre-clinical data that suggest AURKA inhibition reduces the sub-population of breast cancer stem cell-like cells is indeed encouraging and suggest a role for this class of drugs to be combined with other agents that target the main tumor bulk. Triple-negative breast cancers in particular have been shown to have a higher percentage of stem cell-like population leading to worse clinical ooutcomes44-47 and decreasing the metastatic potential of breast cancer cells. New treatment options in this patient population are sorely needed, and we will await any hints of activity in any future clinical trials, including ongoing and planned clinical trials with alisertib; another specific AURKA inhibitor, TAS-119; and pan-Aurora kinase inhibitors, as correlative studies from the phase II study of alisertib in all solid tumors.