METHODS: A case of pCR after a single cycle of neoadjuvant chemotherapy was reviewed. Clinical, surgical, and pathologic details were collected by chart review to outline treatment regimen and response. Background, current national guidelines, and relevant papers were collected using PubMed.

Cycle #1 was complicated with 3 hospitalizations for nausea, vomiting, diarrhea, dehydration, and diabetic ketoacidosis. She refused further treatment and opted for surgical intervention and adjuvant chemotherapy to follow. Physical exam revealed no palpable mass at this time.

Surgery was uncomplicated and pathology revealed no residual sign of carcinoma with a pathologic stage of ypT0ypN0(sn)cM0 (yp representing post-neoadjuvant treatment; sn representing sentinel node; c representing clinical) with a pCR after 1 round of TCH+P.

CONCLUSION: A pCR of HER2-positive IDCA of the breast following a single cycle of neoadjuvant chemotherapy suggests that research into fewer than the current standard number of cycles of neoadjuvant therapy may help define the optimal treatment to obtain pCR in HER2-positive breast cancer. Fewer cycles would decrease toxicity, adverse events, and financial stress to patients with cancer. We are excited about the future possibilities of research advancement in this area and encourage a randomized prospective multicenter clinical trial exploring this idea.

As neoadjuvant therapies have proved their ability to eradicate disease in the breast and lymph nodes, pCR has become an attainable endpoint for breast cancer treatment in some patients.

In the literature, pCR has been described to occur following complete neoadjuvant treatment regimens; however, it is not unusual for the protocol to be aborted due to toxic adverse events (AEs). We present 1 case in which overwhelming AEs limited TCH+P to a single cycle, yet resulted in a pCR of a grade II invasive ductal carcinoma.

Review of systems was unremarkable except for the left-breast mass. Physical exam of the left breast revealed a 1.5-cm mobile mass in the 6:00 position, 2.5 cm from the nipple, without skin changes or nipple discharge. There was no palpable lymphadenopathy.

She underwent a subsequent mammogram and ultrasound. On mammogram, the area of abnormality spanned 5 cm. A core biopsy of the mass revealed a poorly differentiated infiltrating ductal carcinoma, grade II. Immunostaining showed the cancer was estrogen-receptor weakly positive (5%), progesterone-receptor 0%, and HER2-positive (3+).

MRI was recommended for further evaluation of the extent of the malignancy since the physical exam and mammogram were discordant; however, the patient was unable to have the MRI performed. CT scans of the chest, abdomen, and pelvis were performed, along with a bone scan, and all were negative for metastatic disease.

The presence of HER2-positive disease made our patient a promising candidate for neoadjuvant chemotherapy with TCH+P. The initial multidisciplinary plan was for TCH+P x 6 cycles, followed by lumpectomy and sentinel lymph node (SLN) biopsy, followed by radiation therapy, with trastuzumab to continue for 1 year.

Cycle 1 of chemotherapy was poorly tolerated with 3 hospitalizations for severe nausea, vomiting, diarrhea, dehydration, and diabetic ketoacidosis. The patient also developed a disseminated rash requiring dermatology consultation. Our patient’s previous carboplatin/ paclitaxel for her endometrial cancer 3 years prior may have contributed to her poor tolerance of TCH+P. Due to these complications, she refused further treatment and was referred for surgical intervention at this time with plans for adjuvant chemotherapy to follow. Physical exam revealed no palpable mass in the breast and a clinically negative axilla.

The multidisciplinary tumor board reviewed her case and agreed her cancer could be appropriately treated with breast conservation therapy (BCT) as opposed to a total mastectomy. BCT is performed in 3 steps: 1) surgical removal of the tumor itself, achieving a pathologically free margin of excision; 2) surgical staging of the axilla either by way of SLN biopsy or axillary dissection; 3) RT to the breast and a portion or all of the regional lymph nodes.

The specimen labeled left axilla sentinel lymph node was fibroadipose and lymphoid tissue measuring 2.0 × 2.0 × 0.7 cm. The node was negative for carcinoma. Her final breast cancer staging based off of the American Joint Committee on Cancer was ypT0ypN0(sn)cM0 (yp representing postneoadjuvant treatment; sn representing sentinel node; c representing clinical) with a pCR after 1 round of TCH+P.

The FDA funded Collaborative Trials in Neoadjuvant Breast Cancer (CTNeoBC) meta-analysis by Cortazar and colleagues suggests several key features of pCR (defined in the study as ypT is, where is represents in situ):

Attaining pCR, regardless of receptor status, is associated with an increased event-free survival (EFS) of 0.25 (95% CI, 0.18-0.34) and overall survival (OS) of 0.19 (95% CI, 0.12-0.31). The study also notes a greater association with EFS and OS in the eradication of tumors from both the breast and lymph nodes versus eradication from breast tissue alone. Results of the large pooled CTNeoBC analysis also demonstrated that the strength of longterm correlation between pCR and survival is increased by the addition of trastuzumab to the therapy regimen.2

In a thorough analysis of pCR in association with the molecular subtypes of breast cancer, Wang-Lopez and colleagues concluded that pCR functions as a surrogate marker of survival for patients with HER2-positive breast cancer.3 Numerous other reports have also suggested improvement in long-term survival   in patients who attain pCR.4-8 This relationship has gained significant support, so much so that the FDA released a “Guidance for Industry” collection of recommendations, the purpose of which is to encourage the use of pCR as an endpoint to support accelerated approval of trial designs. This guidance was prepared in conjunction with the FDA’s Breast and Gynecological Oncology Group, Office of Hematology and Oncology Products, and Center for Drug Evaluation and Research.9

The neoadjuvant TCH+P regimen has been shown to have a pCR rate between 53% to 69% in HER2-positive, HR-negative cancers, according to the TRYPHAENA study. The primary outcomes of the study were focused on certain neoadjuvant chemotherapy regimens and their AEs, particularly looking at cardiotoxicity for trastuzumab.10 The pCR of neoadjuvant regimens involving trastuzumab has been a focus of several well-regarded studies, including NOAH, CLEOPATRA, and NeoALTTO, which all show similar improved results.11-13 Despite its high success rates for disease eradication, however, TCH+P can have significant toxic AEs for the patient.

AEs often lead to the abortion of neoadjuvant protocols. The TRYPHAENA study revealed TCH+P’s significant AEs: Diarrhea, alopecia, and nausea were reported in >50% of patients. More than 35.5% of patients receiving TCH+P experienced serious AEs, including severe diarrhea, vomiting, and febrile neutropenia. Such effects were witnessed in our patient; she developed severe nausea and diarrhea resulting in multiple hospitalizations for diabetic ketoacidosis, and ultimately in the discontinuation of treatment.10

The primary outcome of the TRYPHAENA study was to assess the tolerability and safety of pertuzumab and trastuzumab given in combination with anthracycline-containing neoadjuvant chemotherapy for HER2-positive breast cancer. This AE was measured using left ventricular ejection fraction. Incidence of systolic dysfunction was found to be low, and secondary findings of increased pCR rates when trastuzumab was added to the regimen further supported its addition to chemotherapy regimens.10 Recent studies confirm that the risk of cardiac toxicity is actually significantly lower in trastuzumab patients than was previously suspected (<6%).14

Studies on the efficacy of reducing the number of neoadjuvant cycles for breast cancer have not been widely published. This case report supports the funding of research to determine the optimum number of TCH-P cycles in HER2-positive neoadjuvant chemotherapy. Of interest, a large 2012 study on the reduction of adjuvant chemotherapy cycles identified no additional benefit of 6 versus 4 cycles of chemotherapy for certain breast cancers. The prospective study randomly assigned 3171 patients to either 4 or 6 cycles of therapy with an average follow-up of 5.3 years. The primary efficacy endpoint was measured as relapse-free survival.15

While this case report cannot independently suggest that fewer cycles of standard neoadjuvant chemotherapy should be used to attain pCR in HER2-positive breast cancers, it is important to document that such examples exist. To further understand the significance of this finding, a prospective multi-institution trial could be performed to randomize patients into treatment groups with varying numbers of neoadjuvant cycles, measure pCR rates per group, and correlate number of cycles with pCR rate. Long-term follow-up measuring disease-free and overall survival rates would be necessary to evaluate of treatment regimens that include decreased cycles of neoadjuvant chemotherapy are a possibility.

This report suggests that research into fewer than the current standard number of cycles of neoadjuvant therapy may help define the optimal treatment to obtain pCR in HER2-positive breast cancer. We are excited about the future possibilities of research advancement in this area and encourage a randomized prospective multicenter clinical trial exploring this idea. 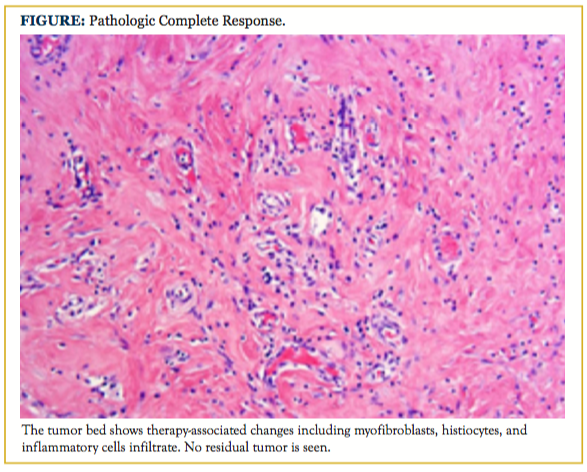