The reactivation of polyomavirus hominis 1, more commonly known as BK virus (BKV), in solid organ transplant recipients may lead to several clinical consequences, including urinary bladder cancer. We present a case of a BKV-positive urothelial carcinoma of the urinary bladder in a 38-year-old female who received a live donor kidney transplant 15 months prior to her cancer diagnosis. The patient was treated with a radical surgery including cystectomy. Both urothelial carcinoma and carcinoma in situ portions of the surgical tissue obtained from the cystectomy specimen showed strong and diffuse expression of BKV T-Ag (tumor-antigen) by immunohistochemical staining. Although they are uncommon, reported cases of BKV-positive bladder cancer in solid organ transplant recipients have been on the rise. We review proposed pathogeneses and mechanisms of oncogenesis by which BKV can lead to tumor formation. Despite the growing body of data, the carcinogenic potential of the BK virus remains controversial.

Polyomavirus hominis 1, more commonly known as BK virus (BKV), infects up to 90% of the general population.1 It is typically contracted during childhood and may remain latent in the urinary tract.2 It has a subclinical or nonspecific course in immunocompetent individuals. After an asymptomatic initial infection, the virus disseminates and establishes a persistent infection in the urinary tract. With the advent of the use of immunosuppressive regimens required to maintain the viability of donor organ transplants, BKV may reactivate in the urinary tract and cause an array of clinical syndromes. Approximately one-third of renal transplant recipients on immunosuppressive medications experience urothelial BKV reactivation.3 This can lead to BKV allograft rejection, ureteral stenosis, and hemorrhagic cystitis.3,4 Several case reports of urothelial carcinoma have been described in renal transplant patients with high levels of BKV reactivation.1,5-22 This has raised the question of a potential role for BKV in the development of urinary tract tumors in the immunosuppressed solid organ transplant population. We present a case of a BKV T-Ag (tumor-antigen) positive urothelial bladder carcinoma diagnosed in a renal transplant recipient. We also summarize a literature review of the published case reports of BKV-positive urothelial carcinomas.1,5-22

Our patient is a 38-year-old female who underwent a living donor kidney transplant in March 2014 for end-stage renal disease caused by long-standing reflux nephropathy. She had been maintained on an immunosuppressive regimen that included cyclosporine, mycophenolate mofetil, and prednisone. In June 2015, she developed painless gross hematuria, at which time she underwent a cystoscopy that revealed several bladder polyps. Transurethral resection of the bladder tumor revealed a high-grade urothelial carcinoma. Imaging with computed tomography revealed a markedly lobulated wall thickening of the antero-superior urinary bladder with a suggestion of local invasion into the abdominal wall musculature (Figure 1). Therefore, the patient underwent anterior exenteration, which included a radical cystectomy, bilateral native nephrectomy, ureterectomy, hysterectomy, bilateral salpingo-oopherectomy, left pelvic lymph-node dissection, and the creation of an ileal conduit. Pathologic staging revealed that more than 90% of the bladder was involved by high-grade urothelial carcinoma (Figure 2). Tumor extension was noted into the vagina, uterus, and adnexa. One deep pelvic lymph node was positive for involvement by tumor. A deep soft-tissue surgical margin was involved as well. Both urothelial carcinoma and carcinoma in situ portions of the surgical tissue obtained showed strong and diffuse positivity for BKV by immunohistochemical staining of T-Ag (Figure 3). Since the surgery, the patient has been under both clinical and radiological active surveillance. She has remained on an immunosuppressive regimen. To date, the patient does not have any evidence of cancer recurrence.

There is a growing body of evidence to support a potential oncogenic role for BKV, especially in the immunocompromised host following renal transplant. This encompasses experimental, epidemiological and clinical evidence.1 Once considered rare, reported cases of BKV-positive bladder cancer in solid organ transplant recipients have been on the rise (Table 1). In our case, the patient developed a high-grade urothelial carcinoma that was diffusely and strongly positive for BKV. Similar to previously reported cases, the urothelial tumor developed in a solid organ transplant patient on chronic immunosuppression. Animal studies in immune-depleted or immature rodents have demonstrated the development of different tumors after a BKV challenge. The BKV T-Ag has the ability to inactivate tumor suppressor proteins of the pRB family, thereby driving the cell cycle into a proliferative state and improving the milieu for oncogenesis.23 Moreover, the T-Ag can bind to p53, which is thought to inhibit apoptosis.24 In mouse experiments, T-Ag inactivation of tumor suppressor genes pRB and p53 in the urothelium resulted in urothelial cancer resembling human carcinoma in situ.25

The exact role of BKV in the development of human tumors remains a subject of debate. Although an immuno-compromised state seems to enhance the oncogenic potential of BKV, bladder cancer has been observed to arise in immunocompetent individuals infected with BKV as well. Among 133 immunocompetent patients diagnosed with BKV in 1 series, the most frequently occurring neoplasm was bladder cancer (15.8%).25 It is still unclear whether the virus primarily represents a “passenger” or “innocent bystander” state that leads to a lytic infection, or whether it plays a direct role in oncogenesis.1,22 Recent data have shown that the urothelium- specific expression of polyomavirus SV40 T-Ag in transgenic mice produced tumors strongly resembling carcinoma in situ lesions of the human urinary bladder.1 It has been hypothesized that the release of progeny BK virions from cell nuclei leading to cell lysis (the lytic infection phase) is considered to counter- act the hypothesis of viral tumor induction and oncogenesis. However, there may be a unifying hypothesis at play: Although lytic infection and oncogenic infection are not able to co-exist at the single-cell level, cell populations can be affected by the virus differently at the whole-tissue level.

One population of cells may include the permissive urothelial cells that allow the infective lytic cycle to occur, while another cell population may include the nonpermissive cells, where “uncoupling” is the main event at play. Uncoupling refers to the virus aborting the process of cell lysis in favor of oncogenesis.26

Alexiev et al1 assembled these observations on pathogenesis into 1 unified model. In summary, this model proposes that BKV reactivates in the urinary tract in the setting of immuno- suppression. This inactivates p53 and pRb, leading to G2/S (gap 2/synthesis) phase initiation. One of 2 possible sets of developments ensues thereafter. The first is a productive infection in permissive cells, leading to cell lysis, with no eventual tumor growth seen. The offshoot to this scenario is that neighboring cells can get infected as well. With time, a portion of these cells become nonpermissive, aborting the process of virion assembly and cell lysis in favor of oncogenesis. The second scenario plays out as activation of viral mutations and viral replication, which leads to a cascade of host cell genomic instability and, ultimately, neoplasia.

VP-1 is a late gene region viral protein that is the main component of the BKV capsid.22,27 Its expression in tumor cells may be more indicative of a lytic infection, while its lack of expression may be suggestive of an oncogenic role via the process of uncoupling. Two cases of BKV-associated urinary bladder carcinoma in renal transplant recipients reported by Alexiev et al had VP-1 DNA detected in the tumor cells by polymerase chain reaction. VP-1 messenger RNA (mRNA) was detected in 1 of these cases and was missing in the other.1 Their data did not allow the determination of whether the viral sequences were integrated into the host genome. However, a recent case published by Kenan et al documented integration of BKV genome into cancer cells, and it presented evidence for molecular uncoupling of T-Ag expression from viral assembly via robust expression of T-Ag and prohibition of VP-1 expression.21 Another recent case reported by Alexiev et al22 noted T-Ag and VP-1 expression in BKV related cystitis surrounding malignant areas; however, VP-1 expression and cytopathic changes were lost in areas of malignant transformation, coupled with persistent expression of T-Ag in tumor cells.22 Lavien et al reported a BKV-associated invasive urothelial  carcinoma in a cardiac transplant patient on immunosuppression. In this instance, T-Ag expression remarkably was evident in both cancer tissue and inflamed bladder tissue; however, VP-1 expression was found only in the inflamed urothelium and not in the carcinoma tissue.8 These studies provide further support for the central role that the large T-Ag plays in oncogenesis.

Despite the rising number of case reports describing BKV-associated urothelial carcinomas and the growing body of data to support this possible viral oncogenic role, there remains a need for conclusive evidence of BKV involvement in carcinogenesis, and an elucidation of the pathophysiologic mechanisms leading to tumor development. The observed association of BKV infection with urothelial carcinoma in solid organ transplant recipients merits clinical awareness for early diagnosis and management of these malignancies. 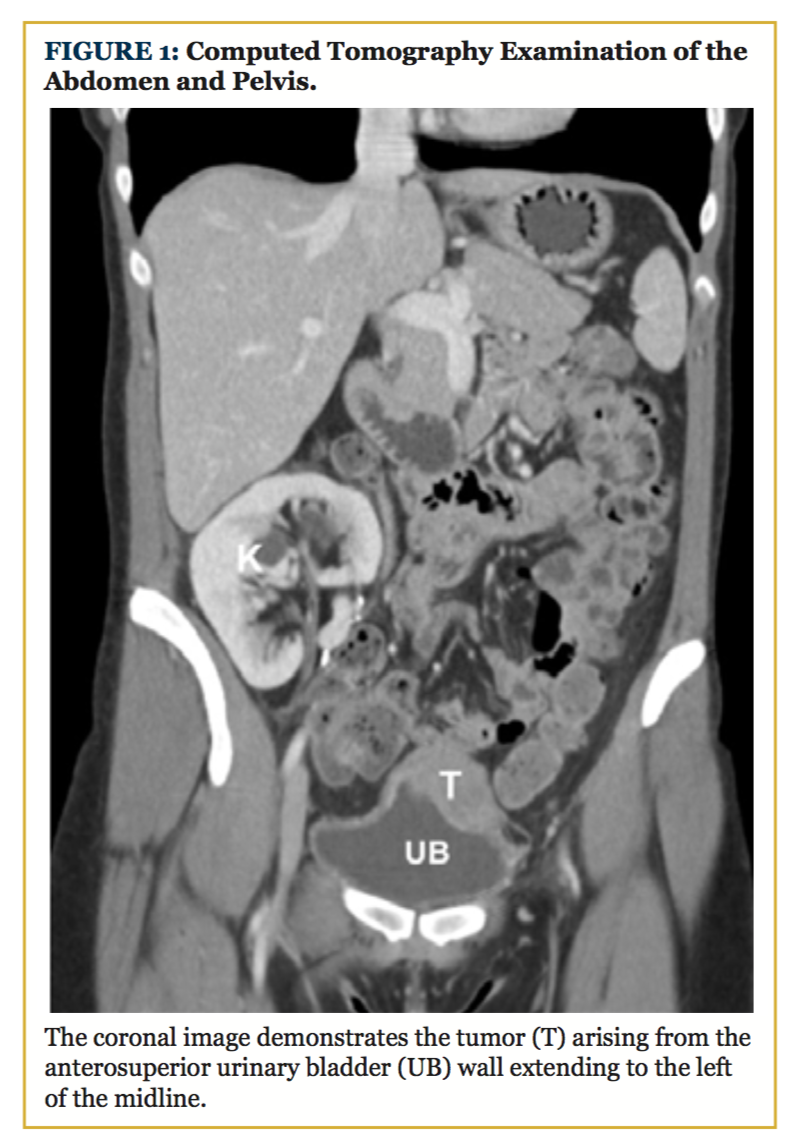 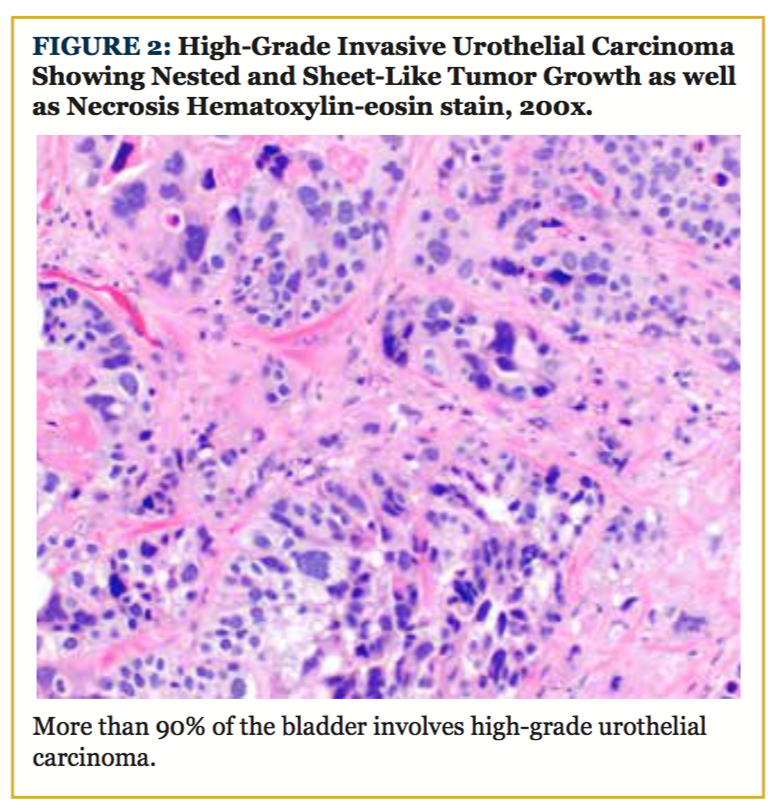 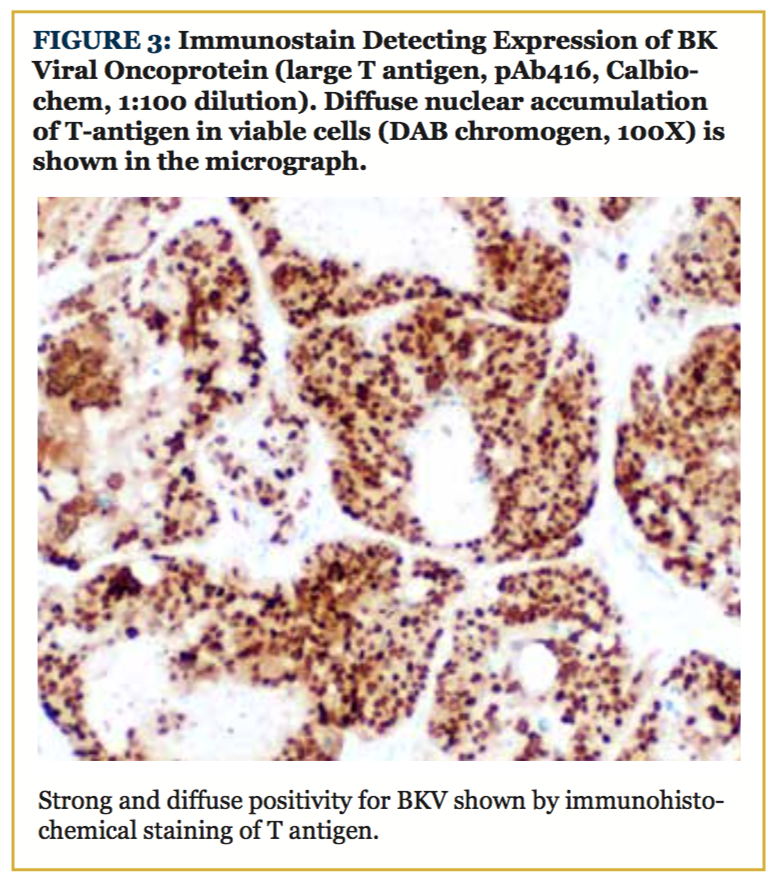 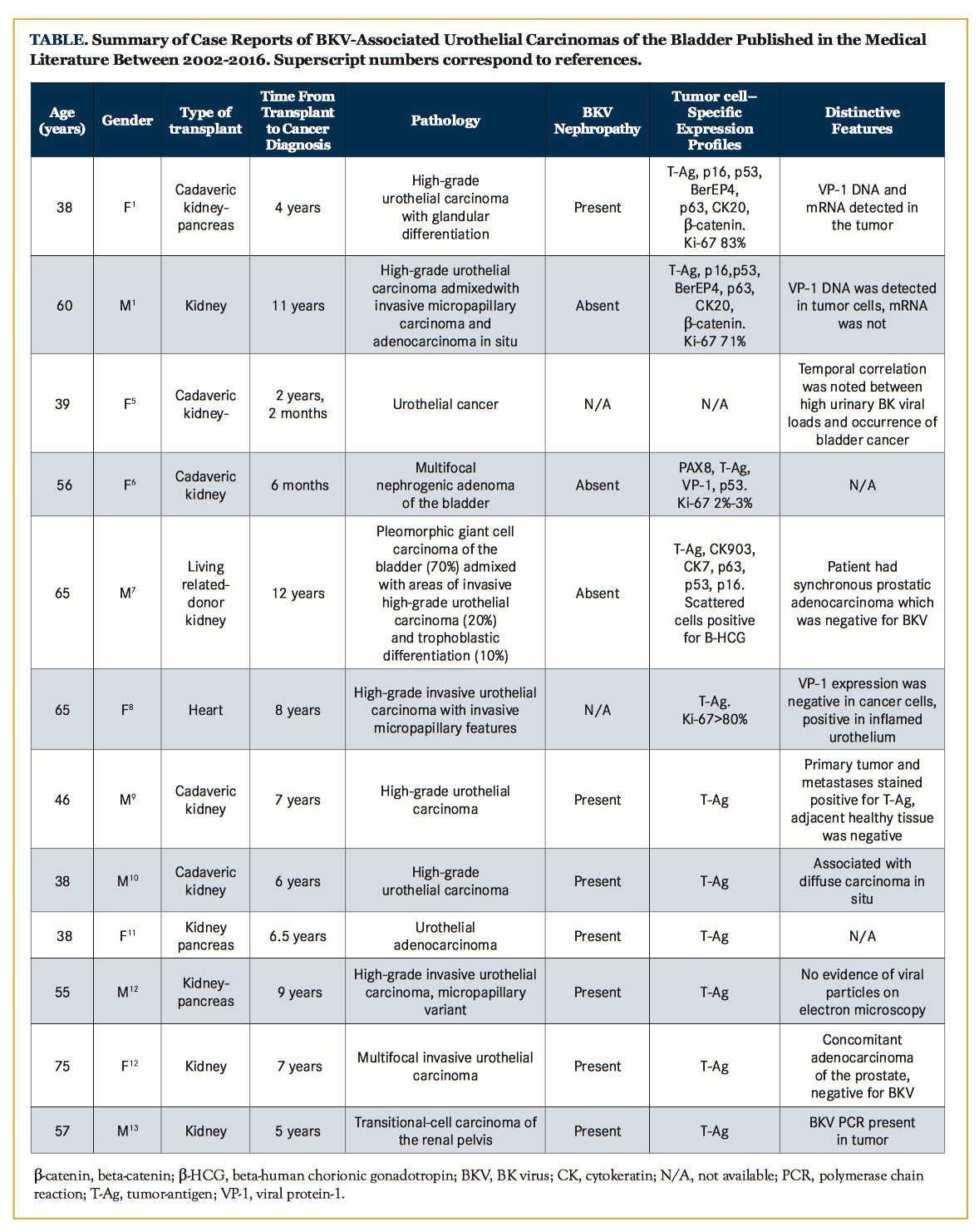 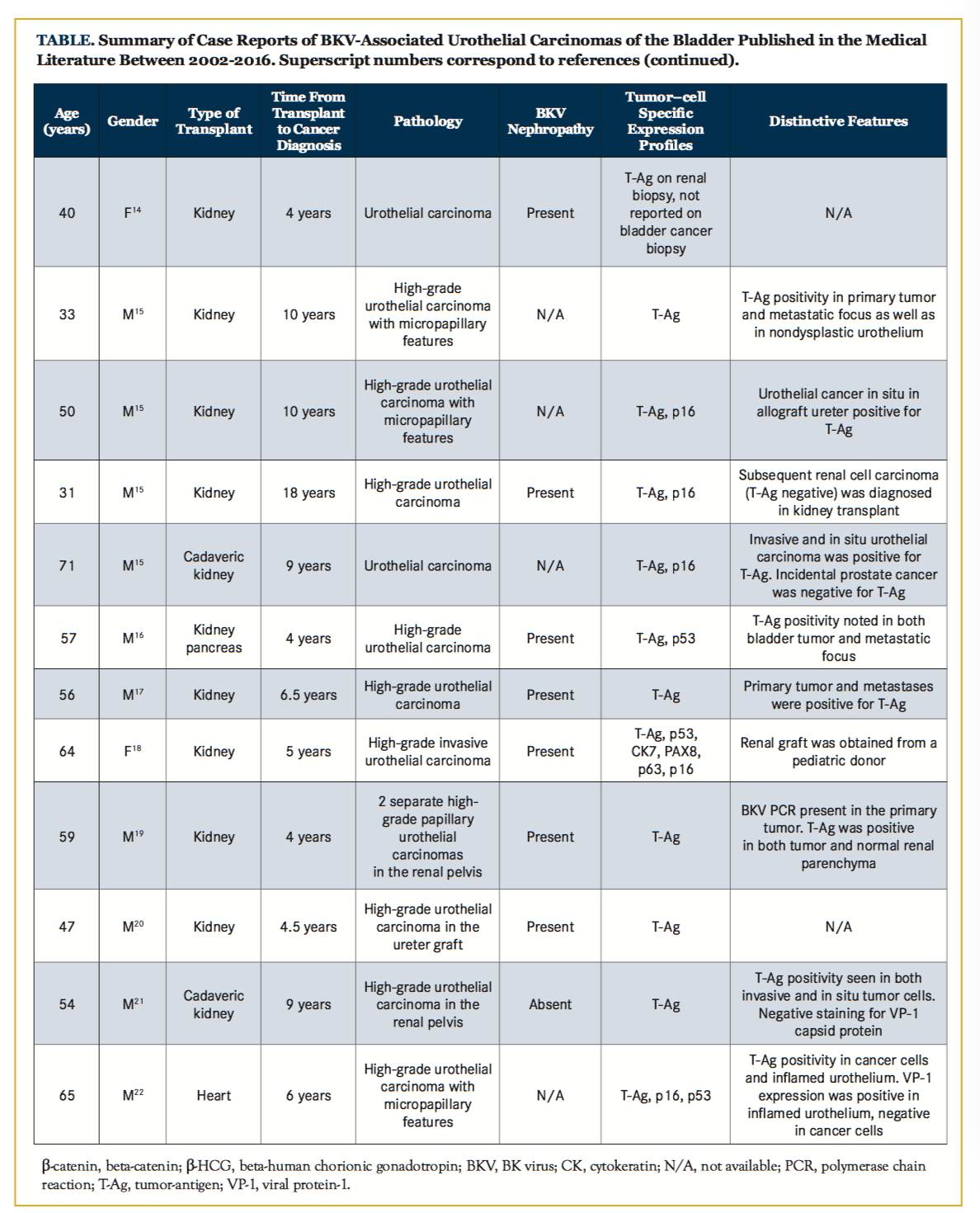