Triple-negative breast cancer (TNBC) is characterized by the lack of estrogen receptors, of progesterone receptors, and of human epidermal growth factor 2 receptors.TNBC accounts for 10% to 20% of all breast cancers.This subtype is known to disproportionately affect young, African American women, particularly those with a BRCA1 gene mutation, and it carries a poor prognosis. While no targeted therapies are currently available for TNBC, platinum-con- taining drugs, inhibitors of poly (ADP-ribose) polymerase, VEGF inhibitors, and most recently, immunotherapy have been investigated as potentially promising agents for the treatment of TNBC. Less controversy surrounds the most appropriate local management (in terms of surgery and radiation therapy) for these cancers. In this review, we summarize the progress made and current approaches to the management of nonmetastaticTNBC.

Triple-negative breast cancer (TNBC) is characterized by a lack of estrogen receptors (ERs), of progesterone receptors (PRs), and of human epidermal growth factor 2 (HER2) receptors. TNBC accounts for 10% to 20% of all breast cancers. With the advent of genomic analysis, and the subtyping of breast cancers according to gene expression profiles, many have used the terms TNBC and “basal-like” as synonymous. However, the spectrum of TNBC is heterogeneous: While 75% to 80% of TNBC cases correlate with the “basal” or “claudin-low” subtypes, about 9% are HER2-positive, and 11% have some hormone receptor gene expression (Figure).1 Clinically, however, most decisions are made based upon the immunohistochemical profile of a tumor, which, in the case of TNBC, is marked by the absence of the 3 commonly tested receptors.

TNBC tends to affect younger, African American women, particularly those with higher body mass index.2 These tumors tend to be larger and of high nuclear grade, although they are not necessarily associated with an increase in lymph node metastases independent of other factors. In a multivariate analysis of a national cancer database study, controlling for tumor size and grade, Plasilova and colleagues found that TNBCs had a lower rate of lymph node positivity than other molecular subtypes (odds ratio [OR], 0.59; 95% CI, 0.57-0.61; P <.001).3 Still, these patients tend to have a worse prognosis than those who have other molecular and immunohistochemical subtypes. For example, in a large single-center cohort study, Hennigs et al found that TNBC had a local control rate and overall survival rate of 89.6% and 78.5%, respectively, compared with 99.1% and 95.1% in patients with luminal A-like tumors.4 Notably, however, luminal A and TNBCs are at the extremes in terms of prognosis.

In addition, a clear association exists between BRCA1 mutation status and TNBC. Up to 66% of tumors in BRCA1 carriers are TNBC. However, the proportion of TNBC among BRCA2 carriers (14% to 35%) is similar to the proportion of TNBC among nonmutation carriers (6% to 34%).5 Similarly, approximately 35% of patients presenting with TNBC will carry a BRCA1 mutation, while only 8% of patients with TNBC will have a mutation in BRCA2.5 Given this relationship, patients who have TNBC and are younger than 60 years should be referred for genetic counseling.6

Systemic Therapy
Given the lack of ERs, PRs, and HER2 receptors, options for systemic therapy in nonmetastatic TNBC are limited. However, it is well known that TNBC responds well to neoadjuvant chemotherapy, and rates of pathologic complete response (pCR) tend to be higher than in other subtypes, although it should be noted that HER2-positive cancers also have a high rate of pCR. In a meta-analysis, Wu et al found that the pCR rate in TNBC was 28.9% versus 12.5% for non-TNBC.7 It has been clearly established that pCR is generally associated with an improvement in survival, and this seems to hold true when pCR is associated with TNBC as well.8

A number of agents have been, or are being, evaluated for use in TNBC. Perhaps best studied are the platinum-containing agents. In a phase II trial of TNBC patients, Kaklamani et al found that eribulin and carboplatin in combination resulted in a pCR rate of 43.3%.9 Similarly, the phase III CALGB 40603 trial found that the addition of carboplatin to a regimen of weekly paclitaxel and dose-dense doxorubicin and cyclophosphamide resulted in a significant increase in pCR in the breast and axilla (54% vs 41%; P = .0029).10 The GeparSixto trial also found an improvement in pCR rates among TNBC patients when treated with carboplatin (53.2% vs 36.9%; P = .005).11 In addition, sever- al phase II trials have also shown better survival rates with these therapies.10-12

There seems to be synergy in pCR rates associated with platinum-based chemotherapy in patients with TNBC who also harbor a BRCA mutation. The PrECOG 0150 trial treated 80 patients, all of whom were either BRCA1/2-mutant and/or had TNBC, with neoadjuvant gemcitabine, carboplatin, and iniparib. Iniparib was initially thought to be an inhibitor of poly (ADP-ribose) polymerase (PARP), but was subsequently found not to be. Parsing out from this trial the relative benefit from any of the 3 components of the neoadjuvant therapy given is impossible; however, among patients who were treated with 6 cycles of neoadjuvant chemotherapy, Telli et al found that the pCR rate among patients with TNBC who were BRCA wild-type (n = 61) was 33%, while the pCR rate among TNBC patients who were also BRCA1/2-mutant (n = 16) was 56%.13 Byrski, in a small study of 10 BRCA1 mutation carriers, 9 of who had TNBC (1 was untested), found a pCR rate of 90% when patients were treated with single-agent cisplatin.14 It is thought that patients with a BRCA mutation, which impairs DNA repair, may be more sensitive to platinum agents that produce cross-linking of DNA, thereby resulting in cell death. Fifty patients in the GeparSixto study had a BRCA mutation, and the response to platinum-containing agents was stronger in patients who were BRCA wild-type versus those who had a BRCA mutation. The OR for pCR among BRCA wild-type patients was 2.1 in favor of carboplatin (50.8% vs 33.1%, P = .005); in BRCA-mutant patients the OR for pCR was 1.6    in favor of carboplatin, but this did not reach statistical signif- icance (61.5% vs 50.0%, P = .413).15 Whether the lack of statistical significance in BRCA-mutant patients is because their lack of DNA repair is susceptible to other DNA-damaging agents, or whether this finding is due to a lack of statistical power given the small number of BRCA-mutant patients in this cohort, remains unclear.

Several studies have evaluated antiangiogenic agents, such as the VEGF inhibitor bevacizumab. Results of studies of bevacizumab in the neoadjuvant setting have demonstrated an improve- ment in pCR rates16; however, results of other studies evaluating it in the adjuvant setting found no improvement in survival.17  The CALGB 40603 trial found that the addition of bevacizumab to weekly paclitaxel and dose-dense adriamycin cytoxan significantly improved pCR in the breast (59% vs 48%; P = .0089), but the improvement in pCR in the breast and axilla did not reach statistical significance (52% vs 44%; P = .0570). This was unlike the addition of carboplatin to weekly paclitaxel and dose-dense adriamycin cytoxan, which improved pCR for both (54% vs 41%; P = .0029 for pCR breast and axilla).10 In addition, while the GeparQuinto study found that the addition of bevacizumab to a regimen of epirubicin and cyclophosphamide followed by docetaxel resulted in a significantly improved pCR rate (39.3% vs 27.9%, P = .003),16 longer-term follow-up found no improvement in survival.18

PARP is also involved in repairing single-stranded DNA breaks, and it has therefore been hypothesized that PARP inhibition may cause cell death by preventing repair of mutated DNA within cancer cells. Several phase I and II trials have shown mixed results with these agents in the setting of TNBC. Several studies found no objective response with PARP inhibitors in unselected TNBC patients.19,20 However, in the ongoing iSPY 2 trial, adaptive selection has found an estimated pCR rate of 51% in the veliparib- carboplatin group, compared with 26% in the control group.21

One of the most exciting developments, however, has been in the area of immunotherapy. Many TNBCs have a disproportionately high level of tumor-infiltrating lymphocytes,22 suggesting that these may be particularly amenable to targeting with immune checkpoint inhibitors. Most recently, the KEYNOTE 012 trial was published, demonstrating that the PD-1 inhibitor pembrolizumab resulted in an overall response rate of 18.5% among 111 patients with recurrent or metastatic TNBC who had generally been heavily pretreated.23 Currently, several ongoing studies are investigating the use of immune checkpoints, including CTLA-4, PD-1, and lymphocyte activation gene-3 pathways, as potential targets of therapy for breast cancer. Such CTLA-4 inhibitors as ipilimumab, in combination with the anti-B7H3 monoclonal antibody MGA271, are currently under investigation in clinical trials for breast cancer treatment.24 In addition, PD-L1, expressed in approximately 20% to 30% of breast cancers, especially within the TNBC subset, has been of particular interest.24 Also, several trials are currently ongoing in the neoadjuvant setting to evaluate immunotherapeutic agents.

Locoregional Therapy
While it has been clearly established that for patients with breast cancer patients, mastectomy and breast-conserving surgery confer the same long-term survival, Chen et al evaluated this question specifically for TNBC in an analysis of 11,514 TNBC patients
in the SEER database.25 Of these, 5469 (47.5%) underwent breast-conserving surgery with radiation therapy, and 6045 (52.5%) underwent mastectomy. Interestingly, they found that breast-cancer–specific (HR, 0.606; 95% CI, 0.502-0.731; P <.001)
and overall survival (HR, 0.579; 95% CI, 0.488-0.687; P <.001) were better for the breast-conservation group compared with the mastectomy group independent of tumor size, nodal status, and grade.25 Similarly, Steward et al demonstrated an improvement in overall survival in TNBC patients treated with breast-conserving surgery (HR, 0.30; 95% CI, 0.16-0.58; P <.001); they did not, however, find a survival benefit with the addition of radiation therapy to patients undergoing mastectomy.26 There is a general lack of randomized controlled trials to define optimal locoregional therapy in TNBC; hence, surgical and radiation therapy in this subgroup of patients is generally analogous to that of other subgroups. Therefore, in general, patients with TNBC should be offered either breast conservation or mastectomy, similar to patients with other subtypes. The higher proportion of BRCA mutation carriers in this subset, however, may impact a patient’s choice in her surgical management.

While some advancements have been made in identifying putative targets in various subtypes of breast cancer, TNBC remains a horizon that warrants further exploration. Given its relationship with BRCA1 mutations, several potential DNA repair targets have been identified. These agents, along with others, have provided fertile ground for clinical trials. Specific aspects of these tumors, such as their potential immunogenicity, raise the intriguing possibility that immunotherapy may be particularly effective. Still, these tumors tend to harbor a poor prognosis, with rapid onset
of distant metastatic disease, even without lymph-node spread or former locoregional recurrence. Surgical and radiation therapy approaches have therefore remained standard, and little progress has been made in tailoring locoregional therapy to this group of patients. As we learn more about TNBC, and the heterogeneity within this subtype, further progress will hopefully be made in improving outcomes for the nearly one-fifth of breast cancer patients it affects. 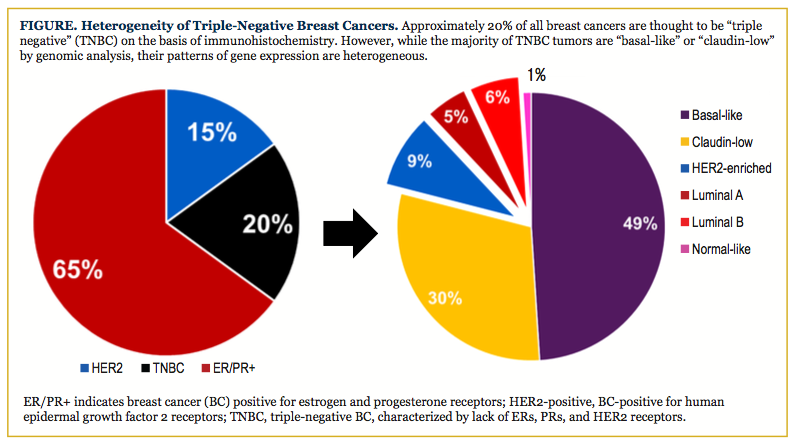