Several topics are covered: 1) Moderate hypofractionation aims to decrease treatment length by several weeks, there- by saving healthcare costs, and has been demonstrated as being noninferior to standard fractionation in randomized controlled trials. 2) Although stereotactic body radiation therapy delivers radiotherapy at an accelerated rate with the use of more intensive prostate tracking and patient immobi lization, studies report excellent outcomes. Moreover, this technique is less expensive than standard intensity-modulated radiation therapy. 3) As proton beam radiotherapy continues to be rapidly adopted, further evidence is required to determine the relative efficacy and long-term benefit in prostate cancer compared with photon beam radiotherapy.
4) High-dose rate brachytherapy may be a safe and effective dose escalation technique, as either monotherapy or boost, and has many advantages such as optimized dosimetry and highly conformal dose distributions, though long-term prospective data are lacking. Lastly, 5) Prostate-rectum hydrogel spacing separates the prostate anteriorly from the rectum, remains a gel in Denonvilliers’ space and then dissolves into liquid that is reabsorbed by the body.

Evidence is being generated to support more conformal dose escalation and hypofractionation with improved dosimetry compared with standard therapy. As research continues, these techniques remain promising and represent current and emerging standards in radiotherapy.

Prostate cancer radiotherapy continues to evolve. In the past several years, significant evidence has accumulated regarding the rapid delivery of external beam radiotherapy using larger doses of radiation per treatment. This radiation technique, known as moderate hypofractionation, has largely centered on the acceleration of treatment delivery over 4 to 6 weeks rather than the standard 8 to 9 weeks. Multiple large randomized trials support the efficacy and safety of moderate hypofractionation in comparison with standard radiation therapy. A more rapid form of treatment, known as stereotactic body radiotherapy (SBRT), has also accumulated evidence, though randomized studies are lacking.

In addition to moderate hypofractionation and SBRT, other emerging treatments for prostate cancer include proton beam radiotherapy, high-dose rate brachytherapy, and the use of a hydrogel spacer.

Standard radiation therapy for prostate cancer with external beam radiation typically involves 38 to 45 treatment fractions  of 1.8 Gy to 2.0 Gy per treatment, for 8 to 9 weeks. Moderate hypofractionation aims to decrease the treatment length by several weeks, and to deliver 2.4 Gy to 4.0 Gy per fraction over 4 to 6 weeks.

Multiple randomized trials have recently reported1-3 (Table) the noninferiority of moderate hypofractionation compared with standard fractionation for the treatment of localized low- and intermediate-risk prostate cancer. These studies used 2.5 Gy to 3 Gy per fraction. Toxicity seemed to be equivalent, although the temporal patterns of toxicity were different. Temporal differences were expected given that moderate hypofractionation delivers radiotherapy faster. Bowel and bladder toxicity peaked earlier and also subsided earlier for moderate hypofractionation compared with standard fractionation.3 Similarly, Radiation Therapy Oncology Group (RTOG) 0415 examined hypofractionated 70 Gy in 28 fractions of 2.5 Gy versus conventional 73.4   Gy in 41 fractions of 1.8 Gy in patients treated for favorable-risk prostate cancer and reported equivalent biochemical control, albeit with higher late grade 2 gastrointestinal and genitourinary toxicity.1

Notably, 1 study indicated nonsuperiority in terms of cancer control4 and worse toxicity5 for hypofractionated 64.6 Gy in 19 fractions of 3.4 Gy given 3 fractions per week. Therefore, if moderate hypofractionation is to be used, evidence supports 2.5 Gy × 28 fractions (RTOG 0415) or 3 Gy × 20 fractions (PROFIT and CHHiP). It is recommended that 3.4 Gy × 19 fractions should not be used.

SBRT involves more rigorous immobilization of the patient and tracking of the prostate. With improved technology, a smaller tar- get margin around the prostate is required. Each SBRT treatment involves 6 Gy to 10 Gy and treatments are typically completed in 1 to 2 weeks. However, this extreme acceleration of radiotherapy has caused some radiation oncologists to recommend caution, given the unknown impact on normal tissue.7 Economically, SBRT is less expensive than standard intensity-modulated radiation therapy, with 1 estimate indicating a 35% reduction in cost,8 and it is more convenient as it often involves just 5 treatments.

Multiple studies have investigated SBRT for prostate cancer. These studies generally report excellent biochemical control of cancer, low rates of major toxicity,9-11 and excellent patient- reported outcomes.12,13 However, most studies investigating outcomes have follow-up of 5 years or less11 and are noncomparative. The only known comparative study assembled a multi- institutional cohort and compared patient-reported outcomes for SBRT and for moderate hypofractionation.14 This study found that patients who underwent moderate hypofractionation were more likely to have minimally detectable declines in quality of life compared with those who underwent SBRT.

Given the relative equipoise between moderate hypofraction- ation and SBRT, a randomized trial is currently being designed by NRG Oncology comparing these 2 techniques.

Proton beam radiotherapy is being adopted rapidly. The United States has 25 proton centers as of May 2017, 12 are currently under construction or under development, and more are likely to be built in coming years. Proton radiation has grown exponentially over the past 2 decades, because of lowered capital costs (with the advent of superconducting synchrocyclotron technology), more physicians and physicists who have trained at proton centers, and patient perception of better outcomes.15   As practitioners become more familiar with the pros and cons of proton beam radiation, and as competition between regional hospitals and providers of radiation oncology increases, proton growth will likely continue to be exponential.15

High dose rate (HDR) brachytherapy delivers radiotherapy through transperineal temporary catheters, delivering a dose greater than 12 Gy/hour using a technique known as remote afterloading. HDR brachytherapy typically requires a brief hospitalization, and it delivers 1 to 5 fractions of treatment. The major advantage of HDR brachytherapy is the ability to design radiation treatment after placement of the catheters. Thus, any irregularity or deviation in catheter placement can be adjusted for using different radiation source dwell times and positions allowing for optimal conformal dose escalation.

A recent innovation in the treatment of prostate cancer with radiotherapy involves the use of a hydrogel spacer (brand name SpaceOAR) to separate the prostate anteriorly from the rectum. The hydrogel is placed via a transperineal needle under ultrasound guidance, and it spaces the prostate anteriorly away from the rectum (Figures 1 and 2). The hydrogel remains in a gel form in the rectoprostatic space (Denonvilliers’ space) for about 12 to 13 weeks, and then it dissolves into liquid form and is resorbed by the body.

Supporting the use of hydrogel are multiple prospective studies showing greater dose escalation and hypofractionation with improved radiation dosimetry23 as well as a 3- to 4-fold reduction in minimally important declines in bowel and urinary quality of life compared with standard therapy.24,25 A decision analysis model using real-world costs and 2016 costs of Space- OAR conducted by Hutchinson et al found that although the rectal spacer resulted in an increase in cost of $518 over 10 years with conventional radiotherapy, significant reduction in rectal toxicity is observed. It is possible that the increase in cost is balanced by reduced toxicity and improved quality of life. Moreover, for high-dose SBRT the effect was amplified with immediate savings of $2332 due to higher rates of rectal toxicity with high- dose SBRT.26 Thus, as increased emphasis is placed on reducing healthcare costs associated with delivery of radiotherapy or complications, SpaceOAR remains a viable option to achieve this goal. Despite the evidence supporting the cost-effectiveness of SpaceOAR implantation, obtaining reimbursement for place- ment of the SpaceOAR may be impacting rapid adoption of this potentially beneficial technology.

Several changes in standards are emerging in prostate radiotherapy. The field is moving towards more rapid fractionation schema in order to reduce the cost of radiotherapy as well as improve patient convenience. Strong evidence supports the equivalence of moderate hypofractionation and standard radiotherapy, and the evidence supporting the equivalence of SBRT and moderate hypofractionation are the subject of ongoing study. Proton beam and HDR brachytherapy are 2 additional areas emerging as options
for prostate radiation, and evidence continues to be generated. Hydrogel rectal spacing is a useful tool that has been proven to improve prostate radiation dosimetry and patient outcomes. 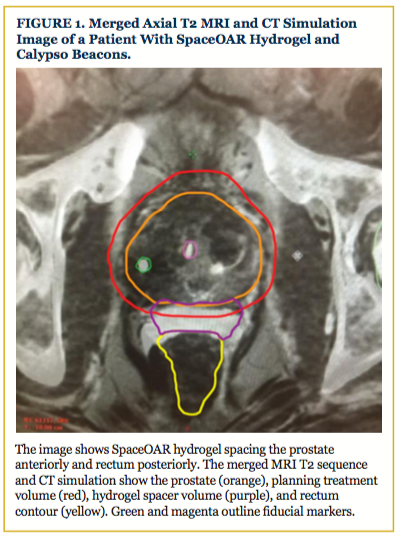