Knowledge regarding the biology and therapeutic value of BRAF mutations in melanoma have increased dramatically in recent years. With this, the therapy approach to BRAF-mutated melanoma has radically evolved. This re- view will discuss the molecular biology of BRAF-mutant melanoma and summarize key clinical trials involving combined BRAF/MEK inhibition which have demonstrat- ed improved overall survival compared with standard chemotherapy. With new data also showing long-term responses in a subset of patients treated with checkpoint inhibitor immunotherapy agents, this review will also discuss reasonable therapeutic approaches to BRAF-mu- tated melanoma patients and explore future clinical investigations.
AJHO. 2017;13(1):4-10

Melanoma is the fifth and seventh most common cancer in American men and women, respectively.1 Its incidence continues to rise dramatically, and the approach to therapy has changed dramatically in recent years. Chemotherapy was previously considered the standard of care for these patients, but was associated with no overall survival (OS) benefit.2 Advancements in immunotherapy and targeted therapy agents have now provided multiple options with known OS benefit. In the treatment of BRAF-mutated metastatic melanoma, the possible algorithms for treatment are especially complex and an optimal approach is still being investigated.

BRAF, a proto-oncogene belonging to the raf/mil family of serine/threonine protein kinases, is the most common gene associated with mutations in cutaneous melanoma, occurring in 40% to 50% of patients.3 The resulting activation of mitogen activated protein kinase (MAPK) pathway leads to oncogenesis
through stimulation of cellular growth and inhibition of apoptosis.4 Clinical trials have demonstrated a median progression-free survival of approximately 12 months with combining a targeted BRAF inhibitor with a MEK inhibitor.5 Simultaneously, trials with immunotherapy agents have demonstrated long-term disease control in a subset of patients. This article will review the biology of BRAF-mutated melanoma, discuss current evidence and challenges for approaching therapy for these patients, and explore future clinical investigations.

The (MAPK) pathway, a critical driver pathway in melanoma, is activated in almost all cutaneous melanomas (Figure 1).6 The major genomic mutations associated with melanoma all involve this pathway, with BRAF being the most common. Other significant, but less frequent, mutations include NRAS mutations (occurring in 25%-30% of cutaneous melanomas) and neurofibromatosis 1 (NF-1) tumor suppressor gene mutations (occurring in 13%-14% of cases).7 The main role of NF-1 involves suppression of NRAS. Except in rare cases and in the development of BRAF inhibitor therapy resistance, activating BRAF and NRAS mutations are thought to be mutually exclusive. There have been no descriptions of activating mutations in CRAF. Activation of the BRAF pathway, unlike the CRAF pathway, requires activation by BRAF alone.9

It is thought that BRAF mutations are likely acquired events occurring early in invasive cutaneous melanoma, rather than founder events.10 Supporting this is data demonstrating high rates of BRAF mutations in metastatic melanoma, but only rare mutations in radial growth phase or in situ melanomas (10% and 6%, respectively),11 which are thought to be the initial malignant lesions prior to invasion.

The therapeutic potential of BRAF inhibition was first noted in clinical trials involving monotherapy with the BRAF inhibitors vemurafenib and dabrafenib. These trials demonstrated an improvement in response rates, progression-free survival (PFS), and OS compared with standard cytotoxic chemotherapy in patients with metastatic melanoma with either BRAF V600E or V600K mutations.15,16 While a subset of patients appeared to remain progression free for an extended period of time, the median PFS was 6 to 8 months. The most common toxicities, noted with similar rates of around 15% with both agents, included photosensitivity reactions, arthralgias, fatigue, alopecia, nausea, diarrhea, and hyperkeratosis. Pyrexia was more common in patients treated with dabrafenib (occurring in 16%-26% of patients),16 and cutaneous toxicities were noted more frequently with vemurafenib.17 Around a quarter (19%- 26%) of patients in these trials developed secondary cutaneous malignancies, including squamous cell carcinomas and keratoacanthomas,17 thought to be due to a “paradoxical” activation of the MAPK pathway in BRAF wild-type cells through stimulation of BRAF dimerization leading to MAPK pathway hyperactivation.18,19,20

The development of resistance to BRAF inhibition with monotherapy led to a median PFS of 6 to 8 months. Preclinical data suggested that combined BRAF and MEK inhibition could delay the onset of resistance and augment apoptosis compared with monotherapy.21 This was confirmed in 4 clinical trials, which have demonstrated improvement in both efficacy and tolerability compared with targeted monotherapy, summarized in Table 1.

These trials have demonstrated a median PFS of 12 months with combination targeted therapy. Multiple mechanisms of resistance have been identified and are still being explored. Many of the significant mechanisms are identified in Figure 2. These include both upregulation and bypassing of the MAPK pathway. Upstream overexpression of receptor tyrosine kinases (eg, PDGFRB), mutations of RAS, downstream mutation of MEK1, and RAF kinase switching (ie, upregulation of CRAF in the setting of BRAF inhibition) have been found to be mechanisms that directly involve MAPK signaling.26-29 In addition, COT kinase has been observed to confer resistance in BRAF V600E mutant cell lines via activation of MAPK through a MEK-dependent mechanism.30 High COT-ex- pressing cancer cell lines have been found to be resistant to both RAF and MEK inhibitors.

Despite these mechanisms, approximately 20% of patients remain progression free at 3 years. This subset of long-term responders are more likely to have a normal LDH at time of diagnosis, an earlier-stage melanoma, and fewer metastatic sites of disease.31 A normal baseline LDH and RECIST complete response were associated with the highest 3-year OS rates of 62% and 63%, respectively. This is similar to findings with ipilimumab therapy, where favorable prognostic factors are associated with prolonged survival.32

Front-line therapy for this patient population remains a complex decision, with arguments existing for both immunotherapy and targeted therapy as reasonable first-line options. Clinical trials are currently underway to answer optimal first-line therapy (such as NCT02224781, dabrafenib and trametinib followed by ipilimumab and nivolumab or ipilimumab and nivolumab followed by dabrafenib and trametinib in patients with BRAF V600 melanoma).33

Whenever possible, patients should be enrolled on a clinical trial. Aside from that, starting with either approach appears to be  a reasonable option based on retrospective data.34,35 Immunother- apies appear to be effective regardless of BRAF mutational status and efficacy is suggested to be independent of prior BRAF-targeted therapy.36,37 A retrospective analysis of 4 clinical trials demonstrated similar response rates in metastatic melanoma to nivolumab regardless of BRAF mutations status (34.6% in wild-type BRAF versus 29.7% in mutant BRAF), prior BRAF inhibitor therapy, prior ipilimumab therapy, or PD-L1 status.37 The median duration of objective response in this analysis was 14.8 months (95% CI, 11.1-24.0) for wild-type BRAF versus 11.2 months (95% CI, 7.3- 22.9) for mutant BRAF melanoma.

Data suggest patients with BRAF mutations are more likely to have CNS disease time of distant metastases compared with BRAF-wild-type patients.40 For patients with brain metastases, historical treatment modalities included whole brain radiation therapy, surgery, or stereotactic radiosurgery; although the first 2 are limited to patients with only a few sites of disease and the latter has demonstrated minimal improvement in affecting OS.41

While local therapy may still be considered on a case-by-case basis, newer data suggest that both BRAF-targeted therapy and immunotherapy are efficacious in treating brain metastases. In patients with brain metastases that were either untreated or had previously been treated and progressed, dabrafenib demonstrated overall intracranial response rates from 6.7% to 39.2% depending on prior therapy and BRAF isoform.42 Efficacy has also been noted with vemurafenib43 and ipilimumab,44 and other agents are being explored (eg, NCT02320058).45 Investigations are also exploring whether the combination of immunotherapy with radiation therapy may provide added benefit.46

Key questions that are currently being evaluated in clinical trials involve whether combining immunotherapy with targeted therapy may provide increased efficacy while still providing a tolerable safety profile and investigating mechanisms of prevention resistance formation to targeted therapy.

Preclinical data combining ipilimumab with BRAF/MEK inhibition suggested efficacy,47 but attempts at combining the 2 therapies clinically has been marked by intolerable side effects. Two phase I studies—concurrent ipilimumab + vemurafenib and concurrent ipilimumab + dabrafenib + trametinib—were closed early due to hepatic toxicity and colonic perforation, respectively.48,49 Studies involving combination therapy with the checkpoint inhibitors pembrolizumab and nivolumab are now underway and are expected to be better tolerated given improved the improved side effect profile of these agents. Other agents are also being explored. Early data from a study evaluating the combination of atezolizumab (MPDL3280A) and vemurafenib showed an ORR of 76% (95% CI, 50.1%-93.2%), including 3 complete responses.50  In regards to preventing resistance formation, both intermittent BRAF-targeted therapy and blocking of alternative pathways, such as PI3K-PTEN-AKT, are being investigated.51,52

Systemic therapy for BRAF-mutant metastatic melanoma has made significant advancements, but many questions remain. While an optimal therapeutic approach is still being investigated in clinical trials, current data have firmly demonstrated that both targeted therapy and immunotherapy represent efficacious treatment options with improvement in OS for BRAF-mutated melanoma patients. 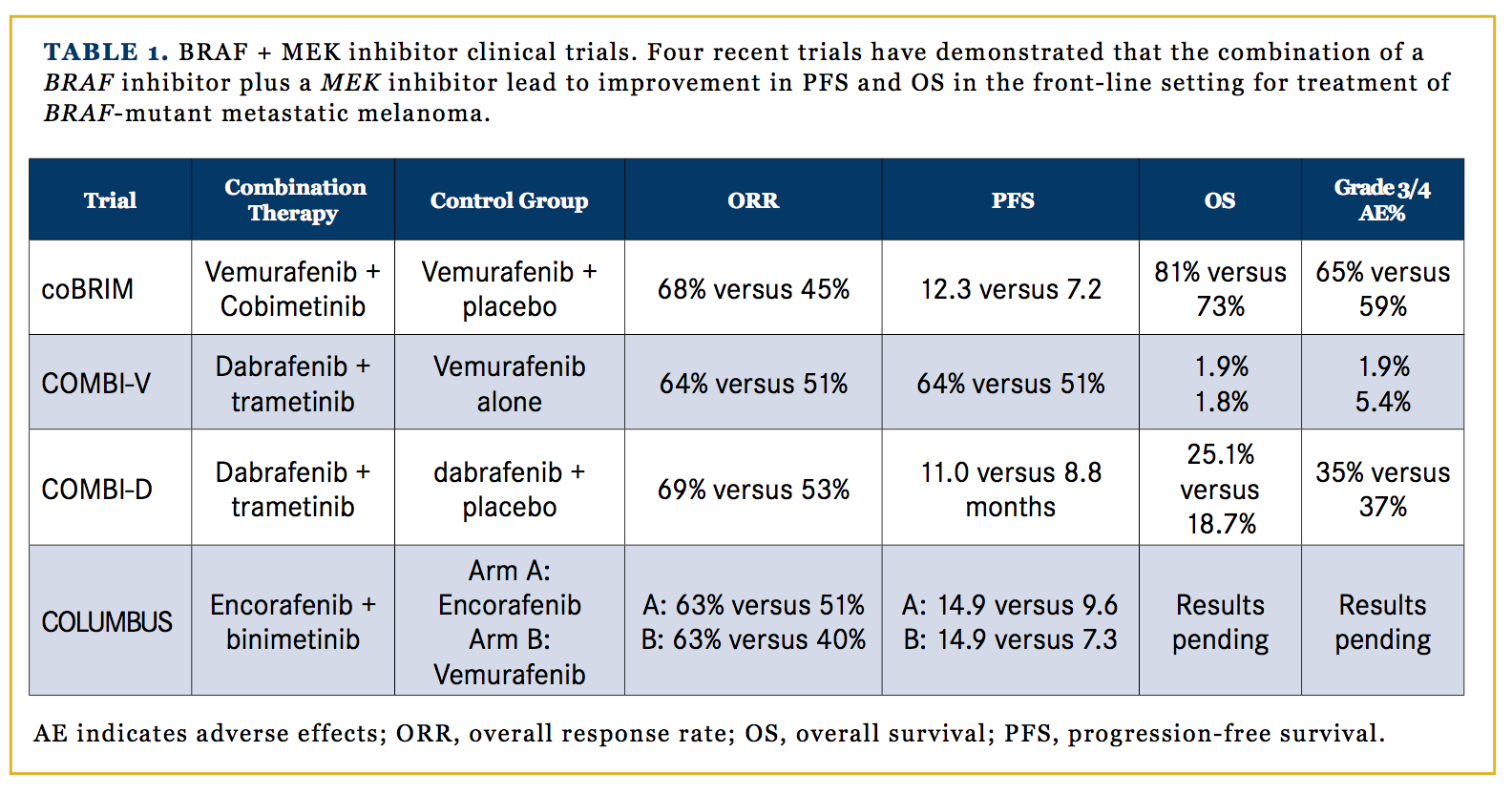 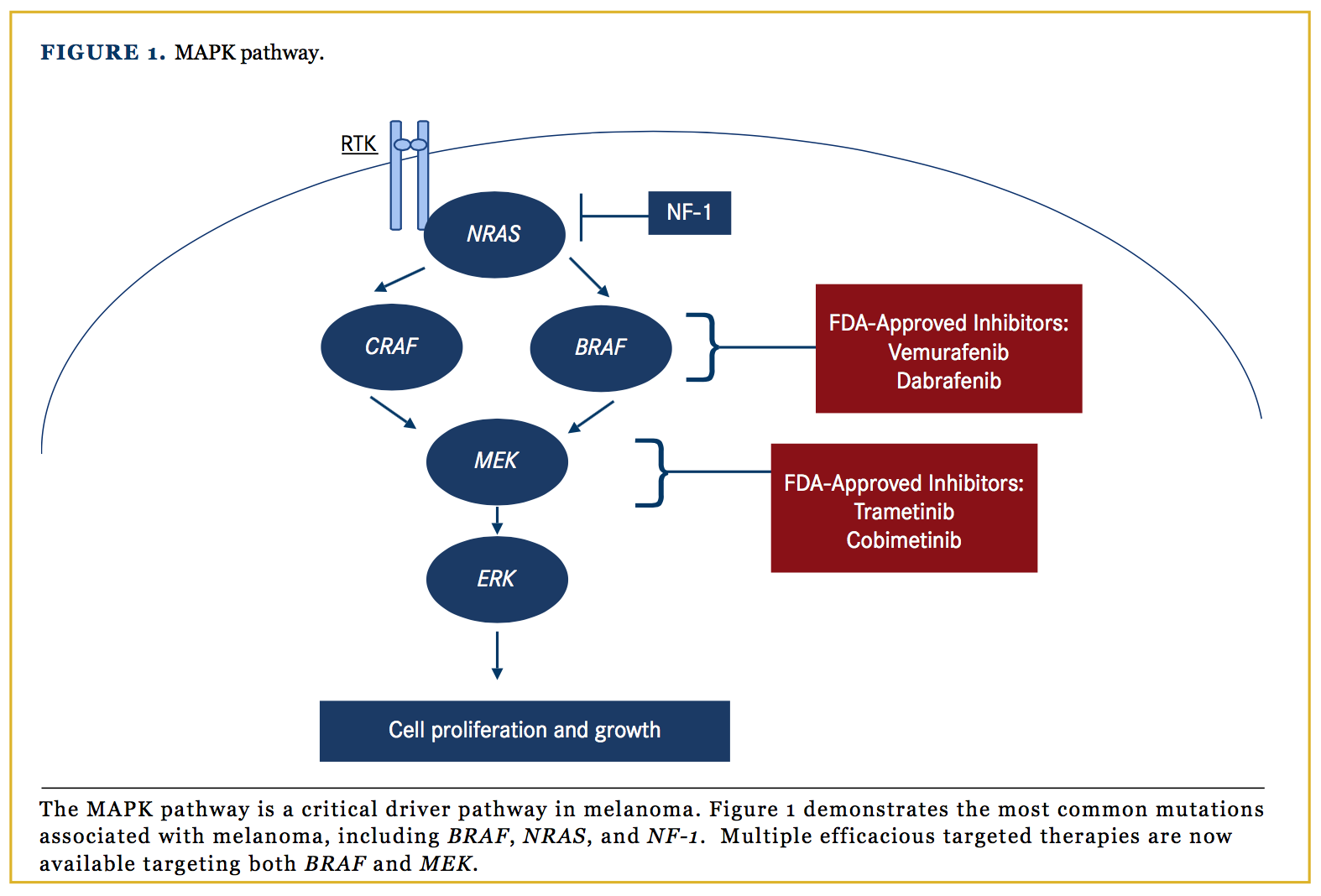 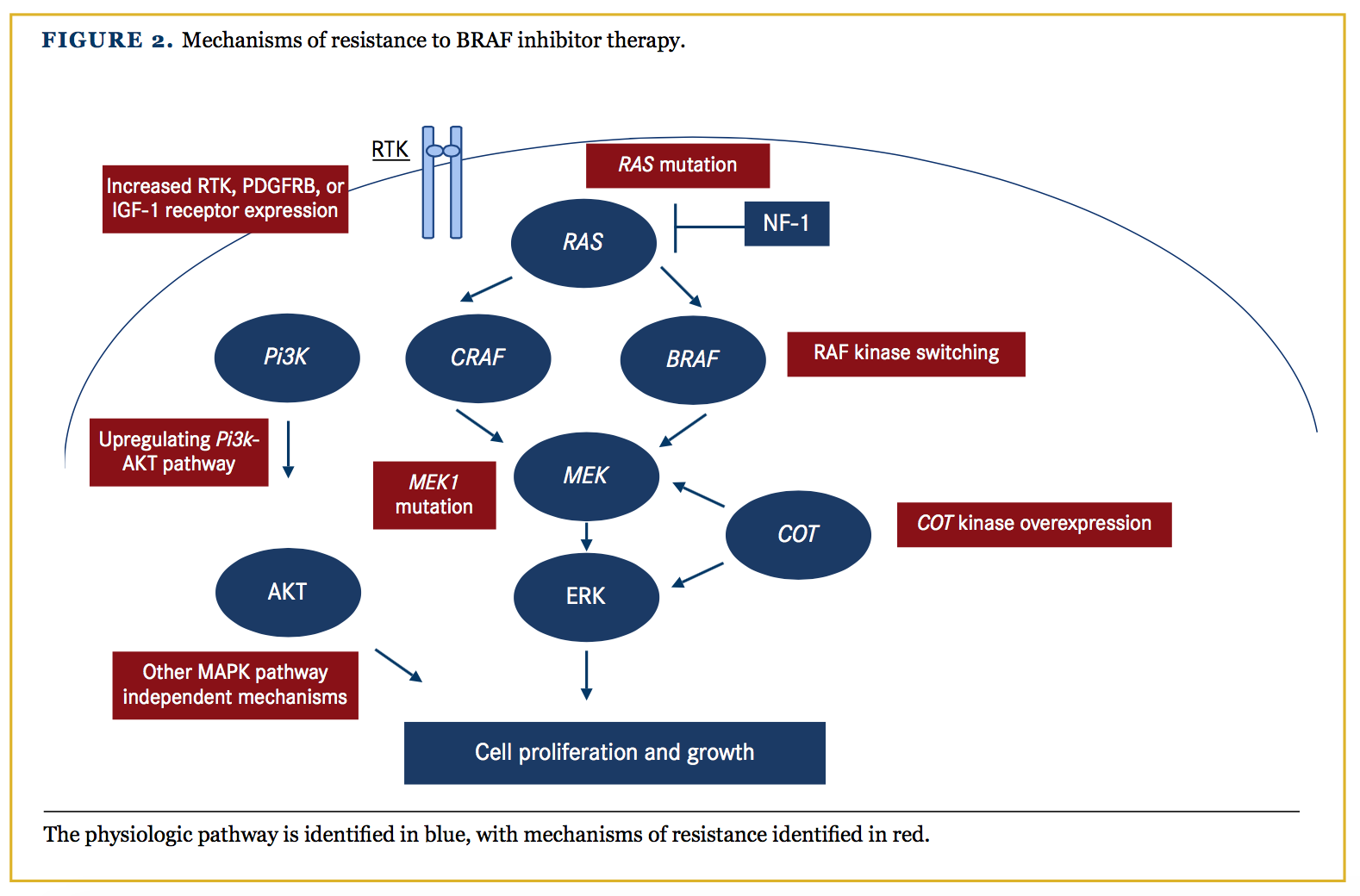