Multiple primary malignancies have become increasingly recognized, with overall prevalence between 0.73% and 11.7%. We report the first case of synchronous renal cell carcinoma and penile squamous cell carcinoma with metastasis to the inguinal region. An 86-year-old male presented with an enlarged left inguinal mass. Staging determined by imaging scans revealed a right renal mass. Despite initial suspicion for metastatic renal cell carcinoma, biopsy showed the inguinal mass to be penile squamous cell carcinoma and the renal mass to be clear cell renal cell carcinoma. When presented with a patient with multiple findings, physicians should be aware of multiple primary malignancies, rather than assuming metastatic disease. Such synchronous malignancies should be considered on an individual case basis and therapy should be directed more toward malignancy that has more prognostic significance. An integrated multidis- ciplinary management should be employed to determine the best source of treatment for patients.

Renal cell carcinoma is one of the top 10 most common cancers in United States and its incidence has been on the rise since the 1990s with an estimated 63,000 new cases in 2016. Other urogenital malignancies, such as penile cancer, are less common in the United States with an annual incidence of 2000 cases.1 Synchronous primary malignancies of the urogenital tract have become increasingly recognized though they are only found as case reports. We describe a patient who initially presented with a large left inguinal mass, and through a series of diagnostic imaging and biopsies, he was found to have 2 separate primary malignancies: right clear cell renal cell carcinoma (RCC) and penile squamous cell carcinoma (PSCC) with metastasis to the left inguinal lymph node. We hope to raise awareness of multiple synchronous primary tumors when present with a urogenital malignancy, diagnostic modalities, and the challenge to treatment.

An 86-year-old male, who had not seen a physician for 20 years, presented with a left groin mass that first appeared 4 years ago and was now growing rapidly with increasing tenderness over a period of several weeks. The mass itself has ulcerated with bloody discharge. Constitutionally, he had lost 50 pounds over the last 2 years and reported having a poor appetite and experiencing lethargy. He smoked 70 packs per year and was still actively smoking. On examination, a 5 × 7 cm round, hyperpigmented and erythematous solid mass was found in the left inguinal area with serosanguinous fluid drainage. Computed tomography (CT) of the body showed a heterogeneously enhancing mass of 7.2 × 5.4 × 6.9 cm in the left inguinal region along with a 1.3 cm enlarged adjacent lymph node. Additionally, a large heterogeneous exophytic mass (7.8 × 4.5 × 7.6 cm) emerging from the lower pole of the right kidney was also seen. A prominent left para-aortic lymph node (9 cm) and lytic lesions in multiple thoracic and lumbar vertebral bodies were also observed (Figure 1). At the time of examination, it was suspected that the left inguinal mass was most likely metastatic disease from a primary renal cell carcinoma. However, a biopsy of the inguinal mass revealed squamous cell carcinoma, with positive staining for cytokeratin 5/6 and p63 and negative for uroplakin and pax 8 (Figure 2).

To further characterize the extent of disease, it was decided to pursue a PET scan, which showed increase uptake in a 0.5 cm posterior mediastinal lymph node, a right kidney lower mass, and intense activities in the left inguinal mass and distal penis region. After reviewing the presentation findings and diagnostic imaging, it was felt the inguinal mass was most likely penile in origin. The patient was referred to urology for evaluation. A hard penile mass was found along with phimosis. He was diagnosed with stage IV penile squamous cell carcinoma, which would be the critical factor determining his prognosis. Mediastinal lymphadenopathy is more likely to be from renal cell carcinoma based on the anatomy, although para-aortic lymphadenopathy could be either renal or penile in origin.

The findings were discussed with the patient, including his Eastern Cooperative Oncology Group (ECOG) score of 3, multiple comorbidities, and overall debility. It was determined that the patient would not tolerate systemic chemotherapy. He received palliative radiation therapy to the left inguinal area for pain control and bleeding. His overall prognosis is poor with an expected survival of less than 6 months. The patient decided to pursue palliative care with hospice and died 2 months later.

Multiple primary malignancies (MPM) have be- come increasingly recognized, with prevalence between 0.73% and 11.7%.2 Although a variety of synchronous primary tumors have been found, primary urogenital cancers have been discussed as individual cases.3-6 Most of the cases involve renal and bladder systems, and 1 case reported penile melanoma and renal oncocytoma.7 In a retrospective analysis, among 63 cases of multiple malignancies, 22 were synchronous tumors and 41 were metachronous tumors. The most frequently seen combinations were ovary–colon and breast–ovary.8 To our knowledge, no prior case of synchronous primary renal cell carcinoma and PSCC has been reported. Development of MPM is believed to be associated with conditions such as genetic susceptibility, immunocompetency, and prior use of chemoradiation therapy to treat other cancers.9 Genetic disorders such as Li-Fraumeni, Lynch syndrome, Bloom syndrome, multiple endocrine neoplasia, and Cowden syndrome can present with multiple primary malignancies. Beckwith-Wiedeman and retinoblastoma can be associated with urologic organ primaries.10

Clear cell RCC is the most common subtype of renal cell carcinoma, accounting for 75% to 85% of cases.11 In addition to sporadic cases, clear cell RCC can present as a part of von Hippel-Lindau syndrome with potential loss of 3p found in 94% of such cases.10 Risk factors include smoking, obesity, and use of chemo- therapy in those with childhood malignancies, autoimmune disorders, transplant patients, chronic hepatitis C infection, and history of nephrolithiasis. Classical symptoms include hematuria, flank pain, and abdominal massin advanced stage. Treatment depends on stage of the disease and may include surgery, percutaneous ablation, and targeted immune therapy.10 For metastatic disease that has spread to the lymph nodes, 5-year survival is found to be 5% to 15%. A simultaneous penile and signet ring cell bladder carcinoma was found in a renal transplant patient who was maintained on immunosuppressive agents.12 On the other hand, PSCC is not as common and accounts for less than 1% of male cancers in United States. Risk factors are smoking, human papilloma virus, lack of circumcision, advanced age, phimosis, and AIDS. Presentation is often characterized by skin change, especially in the glans or foreskin in uncircumcised men, mass, ulcers, rash, small bumps, or malodorous discharges.13

Our patient does have a family history of malignancy, including his father with lymphoma, 2 brothers with prostate cancer, and a sister with ovarian cancer, although no genetic syndrome has been diagnosed. He also has additional risk factors that increase the susceptibility to renal and penile carcinoma. He has an extensive history of smoking, which has been shown to in- crease risk of both RCC and PSCC. Those patients with phimosis have a 7- to 10-fold higher risk of developing penile cancer,14    as in our patient. Men who were not circumcised in childhood have increased risk of penile cancer, and latter circumcision in adulthood does not decrease this risk. Phimosis occurs in uncircumcised men, who are also more prone to build- up of smegma. It has been suggested that smegma can cause chronic irritation and inflammatory reactions, potentially increasing the risk of cancer.1

Treatment for MPM should be individualized depending on the type, location, and staging of the synchronous primary malignancies. Long-term follow-up and screening have been important, especially among those with prior malignancies. In one case, a patient presenting with localized penile melanoma and renal oncocytoma, underwent partial penectomy and radical nephrectomy, with adjuvant interferon therapy.7 Our patient presented with synchronous RCC and PSCC, and treatment in this case was determined by the advanced stage of PSCC. Left inguinal lymph- adenopathy with invasion of surrounding tissue suggests stage IV disease. Because of advanced stage of cancer, ECOG score 3 with multiple comorbidities, and advanced age, systemic chemotherapy may not be well tolerated and quality of life would be dramatically reduced due to treatment. When the probability of harmful effect outweighs the benefit of chemotherapy, hospice or palliative care is recommended, as in this case.

It is critical for physicians to be aware of MPM when multiple urogenital malignancies are found, rather than assuming metastatic disease. MPM should be approached based on an individual basis and therapy should be more directed toward malignancy that has more prognostic significance. Involvement of multiple disciplines including medical oncology, radiation oncology, urology, and primary care could aid in developing the optimum treatment plan for patients, including the possibility of hospice care in end-stage disease. 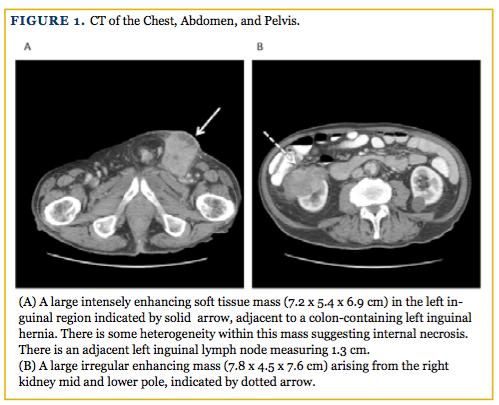 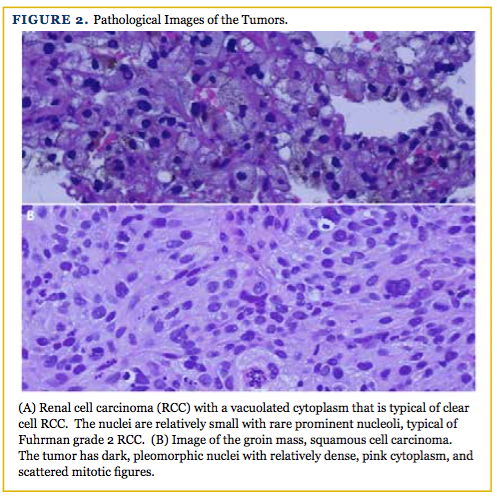