Despite the marked improvements in outcomes for patients with multiple myeloma over the past 10 years as a consequence of many new therapeutic options, there remains a subset of patients who have aggressive disease and short survival durations. Here, we present a patient who developed extensive extramedullary disease despite multiple lines of salvage therapy with novel agents, including monoclonal antibody therapy. We believe that this case and the associated images are important as a reminder that despite the relative wealth of novel therapies (4 new drugs approved in 2015) for relapsed/refractory multiple myeloma, this disease remains one that can be difficult to control, particularly once extramedullary disease has developed.There are very limited published data available for the efficacy of monoclonal antibody therapy in patients with extramedullary disease and this case emphasizes that there will be patients for whom this therapy is ineffective, thus highlighting the importance of developing different therapeutic approaches.

The outcomes of patients with multiple myeloma have improved markedly in the past decade, primarily due to the availability of novel agents such as the immunomodulatory drugs (IMiDs) and proteasome inhibitors (PIs) and, more recently, monoclonal antibodies. However, the courses of treatment for some patients remain marked by early and frequent relapses, requiring multiple lines of therapy. The development of significant extramedullary involvement during the course of the disease is typically associated with more aggressive disease. Here we describe a case of multiple myeloma in which the patient developed extensive extramedullary disease that was refractory to novel therapies, including monoclonal antibody therapy.

A 69-year-old Caucasian man presented with enlarging soft tissue masses. Four years prior, he had been diagnosed with IgG kappa multiple myeloma. At the time of presentation, he had an M-spike of 6.6 g/dL, calcium of 22 mg/dL, and 6% circulating plasma cells. Bone marrow biopsy showed 90% malignant plasma cells with cytogenetics, and flourescence in situ hybridization (FISH) revealed hyperdiploidy and chromosome 13 deletion. He received induction therapy with bortezomib/cyclophosphamide/dexamethasone (VCD). This was complicated by acute renal failure, requiring short-term hemodialysis.

After 7 cycles of VCD, the patient achieved a very good partial response (VGPR). He then underwent autologous stem cell trans- plant (ASCT) with melphalan 200 mg/m2 (MEL200). Posttransplant he achieved a complete response and was placed on maintenance lenalidomide therapy. Twelve months post ASCT, he had evidence of disease relapse; 15 months post ASCT, his disease progressed. He resumed VCD therapy and achieved a VGPR. After 11 months, he again had evidence of biochemical progression, and thalidomide was added to the regimen. After 7 cycles, there was disease progression and he was switched to lenalidomide/bortezomib/dexamethasone with clarithromycin. After 2 cycles, again there was disease progression and his treatment was changed to lenalidomide/carfilzomib/ dexamethasone. After 3 cycles, the patient complained of abdominal pain and bloating, and noted new lumps on his head. A positron emission test/computed tomography (PET/CT) showed extensive extramedullary disease with plasmacytomas in the liver, pancreas, soft tissues, and skeleton. Fine needle aspirate of 1 of the skull-based masses confirmed myeloma. Daratumumab was initiated, but there was evidence of disease progression within 3 months. At that time, pomalidomide and dexamethasone were added to daratumumab.

After less than 2 months on this therapy, he presented with marked enlargement of extramedullary plasmacytomas, including a lesion on his scalp (Figure 1A) and on his back (Figure 1B), as well as new palpable subcutaneous lesions elsewhere on his body. Laboratory studies were notable for worsening liver function (total bilirubin, 6.9 mg/dL; alkaline phosphatase, 626 IU/L; aspartate amino transferase, 210 IU/L; amino alanine transferase, 246 IU/L), hypercalcemia, and an increase in monoclonal protein levels. He was subsequently enrolled in hospice and died 1 month later.

The reported rates of extramedullary disease at relapse have ranged from approximately 3% to 30%, and this form of relapse has been associated with aggressive disease and short survival rates.1-8 The type of extramedullary involvement appears to be associated with prognosis as well, as patients with disease involving extra-osseous organs have been reported to have worse outcomes compared with those with plasmacytomas arising from bones.8 Several studies have suggested that extramedullary relapse was becoming more common in the era of novel agents.9-11 Whether this is truly a consequence of exposure to the novel agents versus increased use of more advanced imaging techniques (eg, PET/CT), coupled with longer disease durations, is unclear. An analysis by Varga et al failed to identify an association between bortezomib/lenalidomide induction therapy and subsequent extramedullary disease development.12 In addition, a longitudinal study by Varettoni et al did not find an association be- tween prior therapy with bortezomib, lenalidomide, or thalidomide and extramedullary spread. Notably, autopsy studies performed more than 50 years ago revealed the presence of extraskeletal involvement in approximately 70% of patients, suggesting that this represents the natural evolution of the disease.13-15

The molecular mechanisms underlying the development of extramedullary disease have not yet been fully defined. A more immature histology and light chain escape have been reported to be characteristics of myeloma cells found in extramedullary sites.11,16 Study results have suggested that factors such as decreased expression of adhesion molecules, downregulation of chemokine receptors, decreased expression of tetraspanins, increased angiogenesis, and increased heparanase-1 expression may be involved.5,17-21

Daratumumab, an anti-CD38 monoclonal antibody, was approved by the FDA in 2015 as single-agent therapy for patients with myeloma who had received at least 3 prior therapies. The initial phase I/II trials that led to the accelerated approval involved heavily treated patients (a median 4-5 lines of therapy) and revealed response rates of approximately 30%.22,23 An updated pooled analysis of these studies reported that 12% of patients had at least 1 extramedullary plasmacytoma.24 The overall response rates (ORRs) for patients with and without extramedullary plasmacytomas were 16.7% (n =18) and 33.1% (n =130), respectively. Subsequent efforts have focused on combining daratumumab with other standard myeloma agents such as bortezomib,25 lenalidomide,26 or pomalidomide.27

In all cases, combination therapy has yielded improved response rates. For pomalidomide and daratumumab, an impressive ORR of 58% has been reported in patients who were double-refractory to IMiDs and PIs.27 However, the efficacy of these combinations in patients with extramedullary disease has not been reported. At this time, limited data exist regarding the efficacy of daratumumab, either alone or in combination, in patients with extramedullary disease. The present case demonstrates an example of aggressive extramedullary involvement that was not responsive to daratumumab either alone or in combination with pomalidomide/dexamethasone, underscoring the importance of developing alternative treatment strategies.

Despite recent therapeutic advances, including monoclonal antibody therapy, the development of extensive extramedullary disease in patients with myeloma portends a poor prognosis. Clinical trial participation for these patients should be strongly considered. A better understanding of the molecular mechanisms that contribute to the development of extramedullary disease is necessary to develop new treatment strategies. 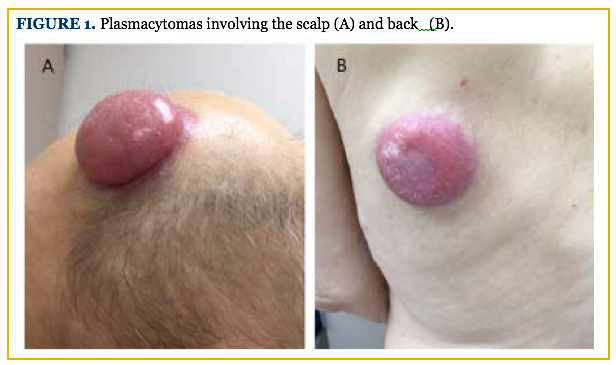