Combined dabrafenib and trametinib therapy (DT) demonstrated an objective response rate of 76% in pa- tients with advanced melanoma containing BRAF V600E mutations that led to accelerated FDA approval. The most common adverse effect of DT is pyrexia (defined as body temperature ≥100.4° F [≥38.0° C]) reported to occur in 71% of patients, leading to dose reductions in 59% of patients and permanent discontinuation of the treatment in 4% of patients. In patients treated with DT who develop pyrexia, we hypothesized a dependent activation of mitogen-activated protein kinase (MAPK) signaling in BRAF wild-type cells, an effect known as paradoxical MAPK pathway activation. Familial Mediter- ranean fever (FMF), a rare inherited condition character- ized by episodes of fever and rash, shares a pathogene- sis similar to that of DT-induced pyrexia, which warrants colchicine-based treatment. We describe for the first time the similarities between DT-induced pyrexia and FMF, and the use of colchicine for DT-associated pyrexia. According to historical data, dose interruptions for grade 2 pyrexia last a median of 11.5 days; in our patient, dose interruptions were limited to 3 to 4 days over a time period of 80 days, and colchicine was generally well tolerated with the exception of thrombocytopenia, which improved over time.

Combined dabrafenib and trametinib therapy (DT) demonstrated an objective response rate (ORR) of 76% in patients with ad- vanced melanoma containing BRAF V600E mutations that led to accelerated FDA approval.1-3 The most common adverse effect (AE) of DT is pyrexia (defined as body temperature ≥ 100.4° F (≥ 38.0° C), reported to occur in 71% of patients. The presence of pyrexia results in dose reductions in 59% of patients and permanent discontinuation of the treatment in 4% of patients. Unfortunately, little is known about clinical associations, etiology, or appropriate management for DT-induced pyrexia.4

A 69-year-old man with no relevant past medical history was evaluated by a dermatologist at our institution for an asymptomatic lesion present on the vertex of the scalp. A shaved biopsy of the lesion confirmed the presence of malignant melanoma, Clark level IV, Breslow thickness 3.4 mm, and mitotic rate of 10 mm2. The patient underwent a wide local excision of the scalp lesion and biopsies of the bilateral sentinel suboccipital lymph nodes. Unfortunately, metastatic melanoma was found involving a right suboccipital lymph node. Subsequently, a right suboccipital neck dissection was performed that identified a single 0.3-cm lymph node. The patient was treated with 5 fractions of radiation with 30 Gy over a period of 2.5 weeks, followed by intralesional interleukin-2 treatments.

Ten months post treatment, new nodules in the right posterior neck were identified. PET and CT scans demonstrated multiple sites of hypermetabolic lesions in both proximal femurs, left ilium, sternum, right scapula, and ribs; multiple lesions in the spine and soft-tissue lymph nodes; and several liver metastases. A subsequent liver biopsy was performed and was found to be consistent with melanoma. DNA sequencing analysis of the tumor revealed a V600R (Val600Arg) mutation.

The patient was referred to medical oncology and initiated therapy with ipilimumab until disease progression 8 months later. Ipilimumab was discontinued and pembrolizumab was initiated; however, after 7 months of treatment, disease progression was noted and salvage therapy with the combination of ipilimumab and nivolumab was started. Unfortunately, the patient developed symptomatic panhypopituitarism. Ipilimumab and nivolumab were stopped; hormone replacement therapy was initiated, consisting of 75 mcg daily levothyroxine and 20 mg hydrocortisone (am dose) and 10 mg hydrocortisone (pm dose).

Due to significant bone pain, the patient proceeded with stereotactic radiosurgery, receiving 2400 centigrey (cGy) to the right eighth rib and 6000 cGy to a solitary site of liver metastasis. Nivolumab was resumed. The patient was stable for almost 6 months when new metastatic lesions in the liver were noted. At that time, the decision was made to initiate 150 mg dabrafenib twice a day in combination with 2 mg trametinib daily. After 9 days of treatment, the patient developed pyrexia of 103.4° F overnight, and it was decided to hold DT. The patient’s temperature records from the day were 103.4° F at am and 103.0° F at pm, accompanied by chills and fever that did not improve with the use of over-the-counter nonsteroidal anti-inflammatory drugs.

Two days after stopping DT, the patient continued complaining of fever up to 103.0° F and of chills. Patient continued on acetaminophen as needed and an additional 5 mg of hydrocortisone twice a day was recommended. On day 4 after discontinuation, dabrafenib alone at 50% reduction (150 mg daily) was reinitiated, but after 3 days of treatment the patient developed fever recurrence to 102.0° F, accompanied by headaches. Dabrafenib treatment was stopped.

Due to the emerging data gathered by our group at Mayo Clinic, and data associating the pathogenesis of FMF and DT-induced pyrexia, the patient was started on 1.2 mg colchicine per day. Two days later, dabrafenib was restarted at a dose of 75 mg twice a day. Schematic representation of the treatment plan is depicted in Figure 1.\
After 3 weeks of treatment, thrombocytopenia secondary to colchicine was noted, and platelets were decreased from base- line 140,000 to 109,000 mcL. After 24 days with treatment and no dose modifications, the patient developed another episode of fever; DT was withheld, but the patient continued with colchicine. DT was resumed after 2 days at full dose. Thirty days later, the patient experienced another episode of pyrexia, and the same medication adjustments were made.

The patient has remained on therapy with DT, and colchicine for approximately 80 days. During this time, the patient has experienced 3 episodes of fever in which DT was held for 2 days and then resumed at full dose; his platelet count increased to 122,000 x 103/ mcL after 3 months of treatment. The most recent PET-CT scan showed no evidence of residual/recurrent metastatic melanoma.

Melanoma is the most malignant form of skin cancer, the fifth most common cancer in men and sixth in women in the United States, with its highest incidence in the Caucasian population.5-7 New cases of melanoma reached 73,870, and approximately 9940 patients were expected to die in 2015 from the disease.8 With improvements in molecular diagnostics and the development of targeted and checkpoint immunotherapies, however, multiple options that have known overall survival benefit now exist for most patients.9

Mutations in BRAF, a proto-oncogene belonging to the RAF/ MIL family of serine/threonine protein kinases, are the most commonly identified oncogenic mutations in melanoma and are present in approximately 50% of cutaneous melanoma cases.9,10 The BRAF inhibitors vemurafenib and dabrafenib have been shown to produce objective tumor responses in 40% to 60% of patients with advanced melanoma containing BRAF V600E mutations.1 The DT combination recently received accelerated FDA approval. Both drugs target the MAPK pathway: Dabrafenib selectively inhibits mutant BRAF that constitutively activates the pathway, and trametinib selectively inhibits MEK1 and MEK2 proteins that are activated by RAF kinases.2 Combined DT therapy demonstrated an ORR of 76% versus 54% with dabrafenib monotherapy (P = .03).3

The most common AE of DT is pyrexia (defined as a body temperature ≥100.4° F (≥38.0° C), which has been reported to occur in 71% of patients treated with the recommended phase II dose of 150 mg twice-daily dabrafenib with 2 mg daily trametinib.4,11 The presence of pyrexia results in dose reductions in 59% of patients and permanent discontinuation of the treatment in 4% of patients. Interestingly, rash has been reported to occur in 35% of patients during first pyrexia. Initial reports from a phase III trial again demonstrate a higher incidence of pyrexia with DT (51%) compared with dabrafenib monotherapy (28%).4,11 It has been reported that the median time to onset of first pyrexia is 19 days, with a median duration of 9 days. These patients had a median of 2 pyrexia events, but 21% had 3 or more events.

Little is known about the mechanism of pyrexia on DT or about the appropriate management of patients who develop it. A range of interventions have been described: dose interruption (46%), dose reduction (35%), antipyretics (18%), and corticosteroid administration (13%).4 The various interventions (beyond treatment discontinuation) are variably effective; however, it is relevant to highlight that dose interruptions when patients develop >2 grade pyrexia persist for a median of 11.5 days, compromising the benefit of DT in patients with active melanoma.4

We hypothesized that pyrexia in patients treated with DT could be explained by the RAF inhibitor–dependent activation of MAPK signaling in BRAF wild-type cells, called paradoxical MAPK-pathway activation, which is driven by the formation of RAF dimers that lead to signaling through CRAF, and, consequently, lead to MAPK-pathway hyperactivation.12,13

The active MAPK can then phosphorylate a variety of target proteins throughout the cytoplasm and nucleus. On the internal regulatory mechanisms, each of the kinases in the MAPK cascade is opposed by 1 or more phosphoprotein phosphatases. The activities of these phosphatases are high enough to make the output of a MAPK cascade depend upon the continual presence of a stimulus feeding into the cascade.14 Interestingly, this mechanism of MAPK pathway activation is similar to that of patients diagnosed with FMF, a rare, inherited condition characterized by episodes of fever and rash (Figure 2). Although little is known about the MAPK–FMF interface, the pyrin protein has shown to be regulated in a MAPK p38-dependent mechanism in patients with FMF.14 The potential ramifications of the crosstalk between NF-κB and MAPK signaling pathways are of immediate relevance to understanding the molecular pathogenesis of FMF and DT-associated pyrexia.14 Based on this observation, oral colchicine was used with success in a patient who developed DT-associated pyrexia.

Colchicine has been used in clinical practice for many years and is the gold standard for treating FMF. The efficacy of colchicine in preventing acute episodes has been demonstrated in various randomized controlled studies.7 It is thought to primarily concentrate in neutrophils and to inhibit their increased chemotactic activity during FMF attacks, although the precise mechanism by which colchicine exerts its effects in FMF is undetermined.

Colchicine is administered orally once the diagnosis of FMF is confirmed. Adult dosing is 1.2 to 2.4 mg/day. The standard formulation in the United States is 0.6-mg tablets; in Europe and Israel, the tablet strength is 0.5 mg.15 Colchicine should be used at low doses and with caution in patients taking acytochrome P450 3A4 inhibitor (ie, cyclosporine, ketoconazole, ritonavir, clarithromycin, erythromycin, extended-release verapamil, extended-release diltiazem) because of the potential drug–drug interaction. In particular, individuals with renal impairment and those taking a statin should stop these medications temporarily while taking colchicine.16 Colchicine, despite its narrow therapeutic window, is a well-tolerated oral drug that is rapidly absorbed by the gastrointestinal tract.17

In a prospective study in a pediatric population treated with colchicine, involving more than 1 year of routine laboratory tests, a transitory mild elevation of transaminases—serum glutamic pyruvic transaminase (SGPT) 48 to 152 IU/L, and serum glutamic oxaloacetic transaminase (SGOT) 46 to 78 IU/L (normal range for SGPT is 7 to 56 IU/L and for SGOT 8 to 48 IU/L) was reported in 18 (11.8%) patients. No patient had elevated alkaline phosphatase or gamma-glutamyl transpeptidase levels. Transaminase levels spontaneously returned to normal in 16 patients within a few weeks. Specifically, there were no correlations among AEs and age of the patients, dose of colchicine, or genetic phenotype.18

Not much is known about the mechanisms of dabrafenib and trametinib associated with pyrexia. Based on our hypothesis that the MAPK signaling pathway is upregulated in patients who experience pyrexia while treated with DT therapy, colchicine was utilized and proved to be a potential adjuvant for the successful management of pyrexia in these patients. A clinical trial evaluating blood colchicine levels, adequate dosages, and pyrexia response is currently underway in our group.

Clinicians should be aware of hematological toxicities as noted in this case, as well as other potential AEs with the use of colchicine, such as diarrhea, nausea, vomiting, gastrointestinal bleeding, thrombocytopenia, and liver and muscle toxicities. Colchicine might be considered in patients where dose interruptions, dose reductions, antipyretics, and corticosteroids have not been effective or are contraindicated. 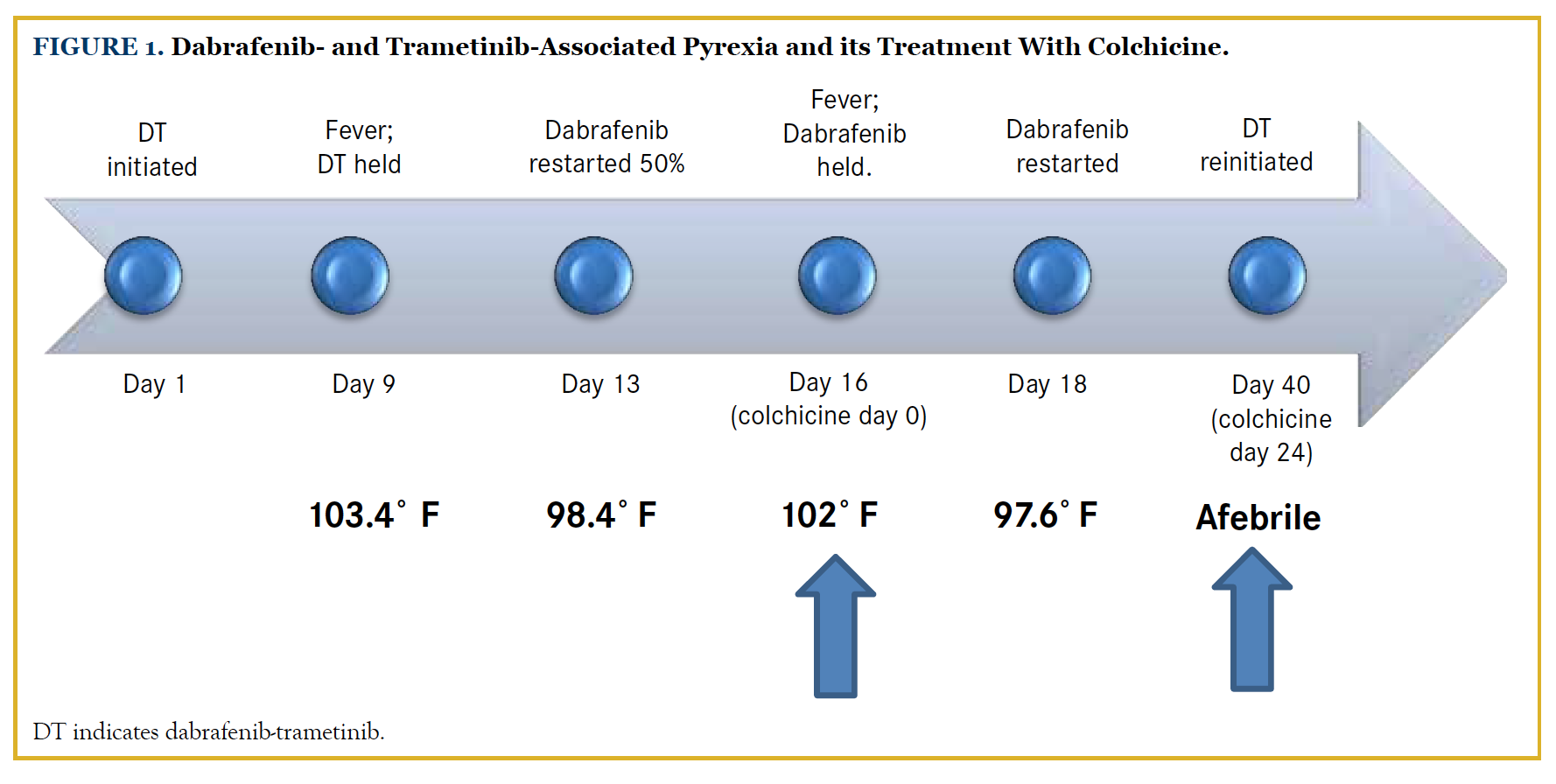 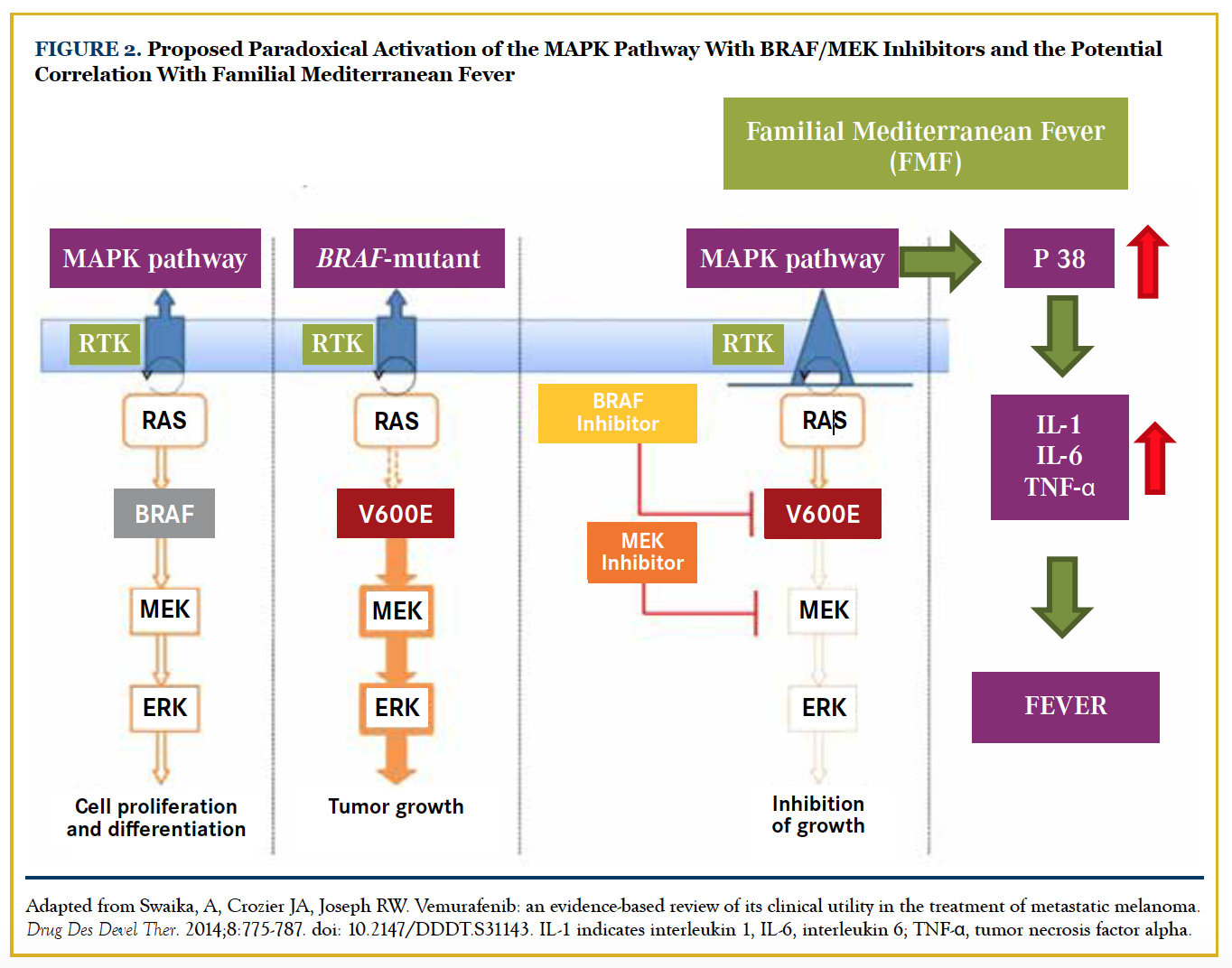