Colorectal cancer (CRC) remains a significant cause of morbidity and mortality worldwide with high disease incidence. Additionally, despite large-scale screening efforts targeting US adults, significant numbers of pa- tients present with advanced, metastatic disease. Over the past 20 years, the therapeutic armamentarium for metastatic disease has increased significantly; 10 new drug approvals include targeted biologics and tyrosine kinase inhibitors. With this increase in options, median overall survival (OS) for patients with metastatic CRC has increased to more than 30 months. With more drug options, and even more combination options now avail- able, optimal sequencing of these options to maximize their proportional OS benefit for patients is of utmost importance; it remains a topic of continued investiga- tion. Here, we review the current evidence on optimizing sequencing, particularly as it relates to regorafenib and trifluridine-tipiracil.

Colorectal cancer (CRC) remains a significant cause of morbidity and mortality worldwide with high disease incidence and, despite large-scale screening efforts recommended for all US adults, significant numbers of patients presenting with advanced, metastatic disease. In 2016, it represented 8% of both new US cases of cancer and cancer-related deaths.1 Meta- static disease is considered incurable, with the exception of patients presenting with oligometastatic lesions confined to the liver or lung who may be amenable to resection, or metastasectomy.2,3 When treatment with curative intent is not possible, patients are typically given a combination of cytotoxic chemo- therapy often in conjunction with a targeted therapy. In spite of advances in systemic therapy, the 5-year survival rate is still a mere 13%.1,4

Until 2000, systemic therapy options for metastatic CRC were extraordinarily limited, consisting simply of 5-fluorouracil. In 1996, the drug irinotecan was approved for patients with recurrent/refractory disease, and then in 2000 for first-line therapy. Since then, the armamentarium has increased significantly, with 9 new drug approvals for the disease. These include monoclonal antibodies that target the vascular endothelial growth factor (VEGF) (bevacizumab), the VEGF receptor 2 (ramucirumab), and the epidermal growth factor receptor (EGFR; cetuximab and panitumumab); a fusion protein that targets VEGFs A and B and placental growth factor (aflibercept); an orally active inhibitor of angiogenic, stromal, and oncogenic kinases (regorafenib); and an oral cytotoxic agent that consists of a nucleoside analog and a thymidylate synthetase inhibitor (trifluridine-tipiracil) (Figure 1). With this increase in options, median overall survival (OS) for patients with metastatic CRC has increased as well, from 12 months in 1990 to more than 30 months in 2015.

Despite the significant increase in median OS, however, the proportional increase for each individual regimen’s median OS has ranged from just 1.4 to 4.2 months (Figure 2).5-14 With more drug options, and even more combination options now available, optimal sequencing of these options to maximize their proportional OS benefit for patients is of utmost importance; it remains a topic of continued investigation. Options for the refractory setting, after standard therapy has ceased—regorafenib and trifluridine-tipiracil—have emerged in the last 2 to 3 years with overall, small proportional increases in OS. Studies of both agents have included exploration of the effects of prior therapies in different ways, with results demonstrating little in the way of significant benefits in any particular situation (Table).

Regorafenib is an oral multikinase inhibitor that targets tumor-cell proliferation via targeting of the KIT, PDGFR-β, and RET kinases; tumor microenvironment signaling via targeting of PDGFR-β and FGFR1; and neoangiogenesis via targeting of VEGF receptors 1-3 and TIE2.15-17 In the global, multicenter phase III CORRECT study, 760 patients with metastatic CRC were randomized after failure of standard therapy with regorafenib or placebo.12 Regorafenib demonstrated a significant increase in the primary endpoint, median OS, compared with placebo, at 6.4 versus 5 months (HR, 0.77; P = .0052). Median progression-free survival (PFS) was also improved at 1.9 versus 1.7 months, for regorafenib versus placebo, respectively. The HR was significantly increased at 0.49 (P <.0001). Disease control rate was significantly increased for regorafenib at 41%, compared with placebo at 14.9%. In subgroup analyses, regorafenib demonstrated superiority in all subgroups, including patients who were diagnosed <18 versus ≥18 months prior to study entry (HR, 0.816 vs 0.760) and patients receiving ≤3 versus >3 prior treatment lines for metastatic disease (HR, 0.788 vs 0.747). In the CONCUR study, a smaller trial conducted in Asia alone, regorafenib was com- pared with placebo in patients with metastatic CRC post standard therapies. It demonstrated an OS benefit (HR, 0.55).18  Notably, patients in this study who had less exposure to prior biologic therapeutics had a differential response to regorafenib. In a subgroup analysis, patients who had not or had received prior targeted therapy (anti-VEGF or anti-EGFR) were noted to fare differently on regorafenib versus placebo, with median OS times of 9.7 versus 7.4 months (HR, 0.31 vs 0.78), respectively (Table).

Trifluridine is an old cytotoxic agent, first synthesized in 1964, that now has new life as part of a novel drug, trifluridine-tipiracil (TAS-102), for the management of metastatic CRC. Trifluridine is the active agent, acting as a nucleoside analog. After intracellular triphosphorylation, it is incorporated into DNA, causing DNA strand-breaks and inhibition of tumor cell growth. The tipiracil component inhibits thymidine phosphorylase in the liver, which would normally immediately metabolize trifluridine; it thus enables adequate and sustained serum levels of trifluridine.

The global, multicenter phase III study RECOURSE enrolled 800 patients whose disease had progressed on at least 2 prior regimens. The study compared results of treatment with TAS-102 with placebo. Median OS was significantly prolonged for patients on TAS-102 compared with placebo, at 7.1 months versus 5.3 months, respectively (HR, 0.68, P <.0001). Median PFS was also improved at 2 versus 1.7 months, respectively (HR, 0.48, P <.0001).13 The results of a subgroup analyses from the RECOURSE study showed similar OS benefit regardless of whether patients had or had not previously been treated with regorafenib (HR, 0.69 vs 0.69, respectively).13 However, the researchers found that the subgroups were unbalanced, because more than 4 times as many patients had not received prior regorafenib than those who had. Patients who had received more prior therapy seemed to have benefited more from TAS-102 (≤4 prior regimens: HR, 0.59; 3 prior regimens: HR, 0.74; 2 prior regimens, HR, 1.05).

The TERRA study of 316 Asian patients also demonstrated a benefit for TAS-102 versus placebo with a median OS of 7.8 months and 7.1 months, respectively (HR, 0.79; P = .035).19 Median PFS was similarly prolonged at 2 versus 1.8 months, respectively (HR, 0.43; P <.001).19 Notably, only about 20% of patients in this study had received prior anti-VEGF therapy and 18% prior anti-EGFR therapy. Thus, it is inferred that TAS-102 is not differentially effective with earlier use in the treatment sequence.

With knowledge gained from these large, prospective studies across a wide spectrum of ethnicities, how might we inform our decision-making process when it comes to sequencing these newer agents? We know that patients derive benefit from access to all agents with activity in metastatic CRC, including regorafenib and TAS-102. In the CORRECT study, patients derived similar benefit regardless of the number of prior lines of therapy they had received and regardless of the time from diagnosis of metastatic disease. However, slightly more benefit may have been seen in those having received prior anti-EGFR therapies.

In the CONCUR study, we learned that regorafenib appears to provide more benefit in patients who have not received any prior targeted therapies. Though this may be the case, now in the age of molecular subtypes of metastatic CRC (ie, the all-RAS wild-type versus RAS mutated subtypes), targeted therapies do have their place given their demonstrated benefit  in earlier lines of therapy. We learned in the RECOURSE and TERRA studies that TAS-102 does not appear to confer significant benefit in less pretreated patients, with patients receiving ≤4 prior regimens faring better than those receiving 2 prior regimens, and to some degree also those having received 3 prior regimens. We also have noted that TAS-102 activity does not seem to be affected by prior exposure to regorafenib.

Without clear, significant data on particular situations in which 1 drug (regorafenib or TAS-102) produces better outcomes than another, there is no definitive instruction on how to sequence these newer agents. The data above may suggest that regorafenib should be considered first in sequence, although this observation is limited by a noticeable absence of direct comparative studies. In deciding when to employ each of the particular therapies, it seems most appropriate to consider clinical patient-specific information, such as performance status, liver function, bone marrow function, and reserve, and adverse events from prior therapies/drug classes, etc.

It is unlikely that situational, comparative randomized studies of regorafenib and TAS-102 will be pursued, especially now, since enthusiastic progress is being made in identifying the qualities of a growing number of CRC subtypes. For example, in HER2-amplified CRC, some success has been demonstrated in studies such as HERACLES and MyPathway.20,21 Additionally, immunotherapy strategies for both the mismatch repair-deficient and -proficient subpopulations continue to develop, with therapies in various stages of development being investigated in both treatment-naïve and pretreated patient populations, in addition to the adjuvant setting. Pembrolizumab now has breakthrough status with the FDA, based on data from the microsatellite-instability–high CRC patient population.22 These strategies include immunotherapy combinations, for example, with agents targeting the indoleamine 2,3-dioxygenase pathway, hy- pomethylating agents, histone deacetylase inhibitors, and vaccine-based therapies such as GVAX. Also, of course, strategies for managing RAS- and RAF-mutated disease continue to evolve. During this time of continuing advances, even more questions regarding appropriate sequencing of therapies for our patients with CRC will arise and need to be considered carefully. 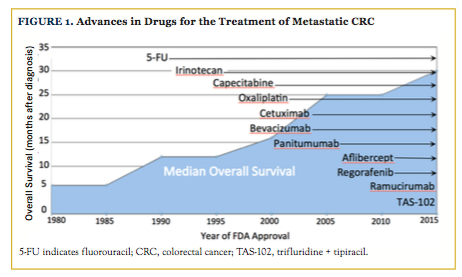 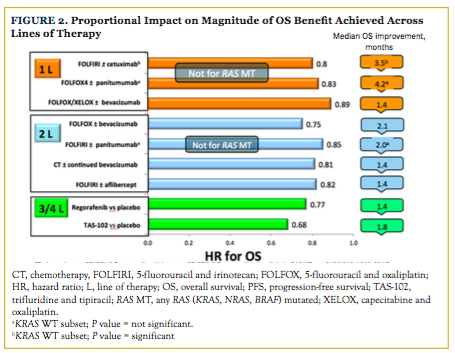 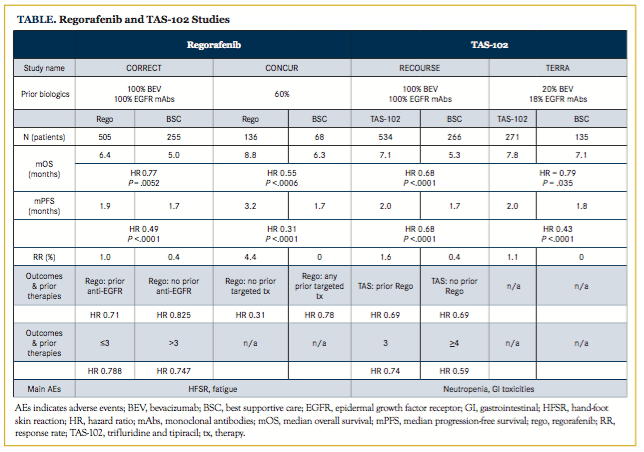