Variation in the worldwide prevalence of BRCA1 and BRCA2 mutations is well recognized. We analyzed BRCA mutation type variability in 585 BRCA-tested epithelial ovarian cancer patients from different ethnic populations. Of these patients, 98 (16.8%) were carriers of the BRCA1 mutation, and 34 (5.8%) were carriers of BRCA2. Among the BRCA1/2 carriers, there were 29 mutation types.The widest variation in mutation types was in non-Jewish Caucasians. Our analysis showed statistically improved overall survival and a tendency towards improved first progression-free survival across all BRCA mutation subtypes, compared to non-carriers.

Epithelial ovarian cancer (EOC) is the leading cause of death from gynecological malignancies in the Western world.1-3 The strongest known risk factors are mutations in either the BRCA1 or BRCA2 gene, which account for approximately 10% of EOC cases.3-5

BRCA mutation carriers represent a unique group of patients who are commonly diagnosed at a younger age, have improved sensitivity to platinum-based chemotherapy, and have an overall improved prognosis.4,6

Variation in the worldwide prevalence of BRCA1 and BRCA2 mutations is well recognized.7-9 In the Ashkenazi Jewish (AJ) population, the BRCA1/2 mutation spectrum is represented mainly by 185delAG and 5382insC in BRCA1 and 6174delT in BRCA2.10 Other populations display a large variety of BRCA mutations, so that ethnicity-specific prevalences of BRCA1/2 mutations are less clearly defined.

We previously described BRCA mutation type variability in a retrospective cohort comprising 190 stage IV BRCA-tested patients with EOC from New York City, Israel, and Italy diagnosed between 1995 and 2009.11 The present paper is an update of that study; the analysis was extended to include 585 BRCA-tested patients with EOC from the same medical centers diagnosed between 1995 and 2014. The study objectives were to describe BRCA mutation type variability in different ethnic populations, and to compare progression-free survival (PFS) and overall survival (OS) among patients with nonhereditary EOC, BRCA mutation carriers, and subtypes of BRCA mutations.

Statistical Methods
The characteristics of BRCA carriers were compared with those of the noncarriers (NCs). Progression-free survival and OS were evaluated by Kaplan-Meyer and multivariate Cox proportional hazards regression models with adjustments for age at diagnosis, platinum sensitivity, stage at diagnosis, and histology to exclude dependency. All statistical analyses were performed using SAS version 9.2 statistical software.

Patient Characteristics
BRCA mutations were assessed in 585 patients (median age, 58 years; range, 33-86 years) of 1200 EOC patient records reviewed. Of the patients assessed for mutations, 132 (22.5%) tested positive, 98 (16.8%) were carriers of the BRCA1 mutation, and 34 (5.8%) were carriers of BRCA2. The clinical characteristics of the BRCA carriers and the NCs are shown in Table 1. The BRCA carrier population tended to be approximately 10 years younger than the NC population, as previously reported.4

More than half of the BRCA carriers (78/132, 59.1%) were of AJ descent. Other BRCA carriers were non-AJ, non-Jewish Caucasian, African American, Hispanic, and unknown.

Among the BRCA1/2 carriers, there were 29 mutation types (Table 2). The widest variation was among non-Jew- ish Caucasians. The most common BRCA1 mutations in AJ carriers were 185delAG (49 patients) and 5382insC (8 patients); the most common BRCA2 mutation was 6174del (16 patients). Thirteen non-AJ patients had 185delAG mutations, and 3 of them had 6174delT mutations.

Assessment of Prognosis
As shown in Figure 1, median OS was significantly longer in BRCA carriers compared with NCs (82.5 vs 50.7 months; P =.0012). 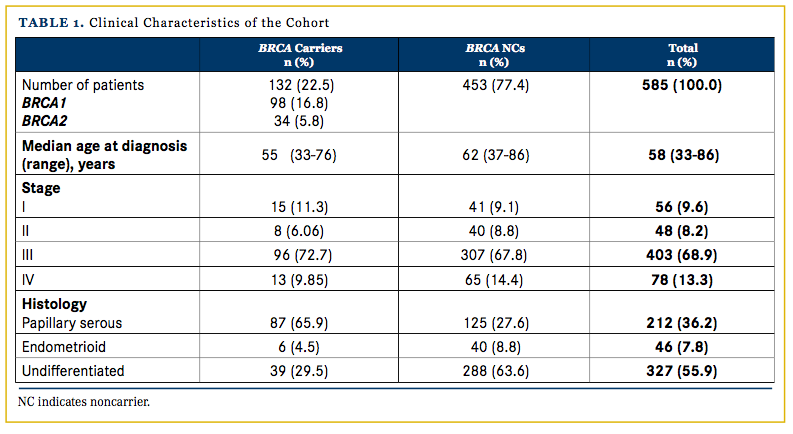 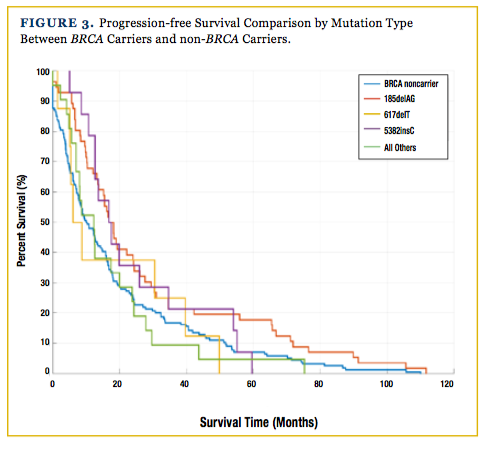