Cervical cancer is the third most common cancer in women worldwide; however, the prognosis of advanced, recurrent, or metastatic cervical cancer remains poor. Several chemotherapy regimens have some activity in advanced cervical cancer; nevertheless cisplatin and paclitaxel are still considered the most effective treatments and the standard of care. The addition of bevacizumab in combination with chemotherapy has shown improved overall survival in phase 3 studies, resulting in approval by the FDA in 2014. Other targeted agents have shown limited activity so far. Immunotherapy is emerging as a promising treatment for cervical cancer. We review the literature behind bevacizumab as a single agent, bevacizumab in combination chemotherapy, and promising targeted therapies in advanced and recurrent cervical cancer and their implications in clinical practice.

Cervical cancer is the third most common cancer in women worldwide and is diagnosed in over 12,000 women in the United States each year.1 Among minorities, cervical cancer has increased in incidence each year, with a global annual death rate of 275,000.2 Worldwide it remains one of the most common causes of cancer death among women. The human papilloma virus (HPV) is the primary cause of cervical cancer worldwide, and is implicated in over 99% of cases.3

Progress in the management of cervical cancer has been slow. Over the last 60 years, 2 major advances were accomplished. First, the introduction of the PAP smear as a screening method in the 1950s, which led to a 60% or higher decrease in death from cervical cancer.4 Second, though 50 years later, several randomized trials demonstrated a 30% to 60% reduction in the risk of death with the addition of cisplatin to radiation therapy, which led the National Cancer Institute to issue a clinical alert.5 Current treatment for cervical cancer can yield cures in 80% to 90% of women with early stage I and II cervical cancer and 60% in stage II. However, the prognosis for women with advanced or recurrent cervical cancer remains poor.6 More recently, the development of targeted therapies that selectively target specific molecular pathways involved in tumorigenesis may lead to other major advances in the management of cervical cancer. We review the literature behind current and emerging therapies in advanced and recurrent cervical cancer and their role in clinical practice.

The Effect of Chemotherapy in Cervical Cancer

For the vast majority of patients with recurrent or metastatic disease, chemotherapy has represented the only treatment option. However, it is important to remember that in patients with limited metastatic disease in the para-aortic nodes, central pelvic recurrences, or solitary lung metastasis, long-term survival can be achieved with surgical resection and\or radiation therapy.5-12

Several chemotherapy agents have activity in previously untreated advanced cervical cancer. Traditionally, cisplatin has been considered the most active drug.13 Other agents with documented activity include ifosfamide, paclitaxel, topotecan, irinotecan, capecitabine, and pemetrexed.14-19 Current evidence suggests that platinum-based combination regimens may be more effective. The combination of cisplatin and paclitaxel yields a higher response rate and improved progression free survival (PFS) compared with single-agent cisplatin but does not improve overall survival (OS).20 However, there are potential benefits to quality of life. The combination of cisplatin and topotecan compared with single-agent cisplatin showed an improvement in overall response rate (ORR), PFS, and OS.21 On the other hand, the toxicities were significant, with 78% of patients in the study requiring unanticipated hospital admissions for supportive care and management of toxicities. 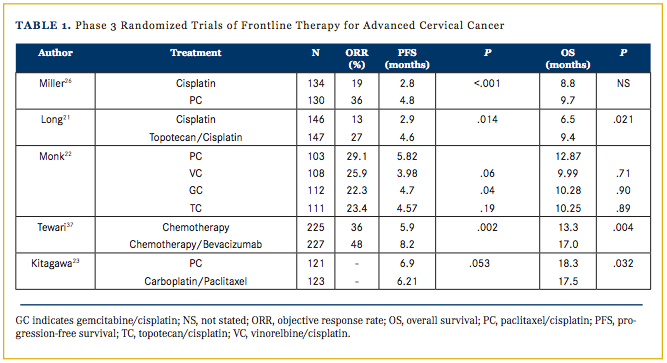 Treatment options after first-line platinum-based therapy are limited. Many chemotherapy agents and several targeted agents have been evaluated, but in general have limited activity. Topotecan, vinorelbine, and pemetrexed are among the most active agents, while docetaxel, gemcitabine, vinorelbine, erlotinib, cetuximab, sunitinib, lapatinib, and pazopanib were found to have minimal activity.24-33 The results of these studies are summarized in Table 2. 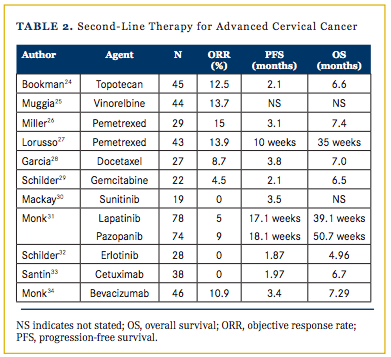 The most promising experimental therapy to date in cervical cancer is targeting angiogenesis to block the growth of nutrient-supplying blood vessels in cancerous tumors with the vascular endothelial growth factor (VEGF) inhibitor bevacizumab. A phase 2 multicenter trial evaluating single-agent bevacizumab therapy among women with persistent or recurrent squamous cell carcinoma of the cervix was reported.34 Study participants consisted of 46 patients with measurable disease who had been treated with no more than 1 or 2 non–cisplatin-based cytotoxic regimens or any prior cisplatin-based chemotherapy, and had good performance status, with adequate hematologic, renal, hepatic, and coagulation function. The median age was 46 years. Most patients were Caucasian (69.6%). Almost half (47.8%) had a Gynecologic Oncology Group (GOG) performance status of 0. The most common histology (93.5%) was squamous cell carcinoma. All patients had at least 1 prior chemotherapy regimen. The majority of the patients had prior radiation (82.6%) and prior hysterectomy (56.5%). The median duration of response was 6.21 months (range, 2.83 to 8.28 months). The median PFS and OS times were 3.40 months (95% CI, 2.53-4.53 months) and 7.29 months (95% CI, 6.11-10.41 months), respectively. Five patients (10.9%) had partial responses. Grade 3 or 4 adverse events (AEs) included hypertension (n = 7), thromboembolism (n = 5), gastrointestinal (n = 4), anemia (n = 2), other cardiovascular (n = 2), vaginal bleeding (n = 1), neutropenia (n = 1), and fistula (n = 1). One death occurred due to infection. The study suggested that the activity of single-agent bevacizumab compared favorably with cytotoxic chemotherapy drugs.

Bevacizumab in Combination With Chemotherapy

Since 2006, small studies have suggested that the combination of bevacizumab and chemotherapy was highly active in advanced cervical cancer.35,36 However, the most significant and practice-changing study for the management of advanced cervical cancer was recently reported by the GOG. In protocol GOG 240, women diagnosed with recurrent, persistent, or metastatic cervical cancer who had no prior chemotherapy except for chemotherapy used concurrently with radiation therapy for locally advanced nonmetastatic disease, were enrolled into a phase 3 randomized study.37 A total of 452 women were enrolled into a factorial 2 × 2 design study where approximately half the patients received topotecan with paclitaxel and the other half received cisplatin and paclitaxel. Additionally, about half of the patients in each of these treatment groups received bevacizumab with their chemotherapy. The addition of bevacizumab to combination chemotherapy was associated with an improvement of 3.7 months in median OS (Table 1). The difference in OS translated into an HR for death of 0.71 in favor of the addition of bevacizumab (P = .004). Response rates were 48% with bevacizumab and 36% with chemotherapy alone (P = .008). There was significantly more toxicity in patients who received bevacizumab. However, this represented the usual toxicities associated with bevacizumab. Grade 2+ hypertension was seen in 29% of patients versus 2% in those who received chemotherapy alone. Grade 3+ thromboembolic events occurred in 8% of bevacizumab-treated patients and 1% of patients who received only chemotherapy. Grade 3+ gastrointestinal fistula occurred in 3% of the bevacizumab group but in none of the patients who received chemotherapy without bevacizumab. Despite the toxicities, the addition of bevacizumab showed acceptable safety, and patients did not report a statistically significant decrease in patient-reported quality of life. As a secondary outcome in the study, topotecan-paclitaxel did not outperform cisplatin-paclitaxel, even among patients with prior exposure to cisplatin. The study did not distinguish the differences in toxicity profile between the combination chemotherapy regimens. However based on previous trials, it is expected that the use of topotecan-paclitaxel causes more fatigue, leukopenia, and neutropenia, and significantly more thrombocytopenia and anemia compared with cisplatin-paclitaxel.23

As mentioned, except for bevacizumab, the role of other targeted therapies in cervical cancer so far remains undetermined. However, it is important to remember that these trials have typically been conducted in a nonenriched patient population. In terms of chemotherapy agents, there has been renewed interest in the potential role of fluoropyrimidines. Several trials have reported modest activity for single-agent capecitabine.18,38,39 Recently encouraging activity was reported in a phase 2 study with S-1.40 S-1 is an oral fluoropyrimidine consisting of tegafur, a prodrug of 5-fluorouracil, gimeracil, an inhibitor of dihydropyrimidine dehydrogenase, which degrades fluorouracil, and oteracil, which inhibits the phosphorylation of fluorouracil in the gastrointestinal tract, thereby reducing the gastrointestinal toxic effects of fluorouracil. In this study, 36 patients received a median of 4 cycles with an ORR of 30.6%. The median time to progression and the median survival time were 5.2 and 15.4 months, respectively. These promising results have led to a randomized phase 3 study evaluating the efficacy and safety of S-1 with cisplatin versus single-agent cisplatin in patients with stage IVB, recurrent, or persistent carcinoma of the cervix.41

There have been significant advances in the past several years with regard to immunotherapy for cancer, beginning a new era of research in oncology. By identifying T cells that target cervical cancer HPV oncoproteins, and enriching for and expanding these T cells ex vivo, efforts are being made to attack cervical tumors that have not been immunologically targeted before. The hope is that immunotherapy and adoptive T-cell therapy can induce regression of cervical cancer.

A novel study investigated use of human papillomavirus-targeted tumor-infiltrating lymphocyte therapy.42 In this ongoing study, T cells were harvested from tumor tissue and cultured. The cultures were then tested for HPV viral protein E6 and E7 reactivity. The most reactive cultures were selected for infusion and then expanded. Billions of these expanded T cells were then infused into the patient. Nine patients have received tumor-infiltrating lymphocytes. One patient achieved partial response and 2 patients achieved a complete response. These complete responses were still ongoing at 22 months and 15 months after treatment. Most common toxicities included grade 3 and 4 myelosuppression, neutropenia, fever, and diarrhea. This study provided preliminary encouraging results, and completion of this study is eagerly awaited.

Another promising agent in development is live attenuated Listeria monocytogenes-based immunotherapy (ADXs11-01). ADXS11-001 is a drug that is designed to create a Th-1 type immunologic response, generating CD8+ T cells that target HPV-E7-transformed cells while simultaneously suppressing the immunologic tolerance within the lesions.43 In a recent phase 2 study of ADXS11-001 in the treatment of persistent or recurrent cervical cancer, patients previously treated with chemotherapy, radiotherapy, or both were randomized to either 3 or 4 dosages of ADXS11-001 with cisplatin.44 In the study, 18-month survival was 28% and 12-month survival was 36%. There was an 11% ORR, with an average duration of 10.5 months after 1 cycle of ADXS11-001. Prior therapy, baseline performance status, and the addition of cisplatin had no effect on survival or response. Current studies are needed to optimize the dosage and inclusion of multiple cycles with other agents to determine whether ADX11-001 can be used as an active agent against recurrent cervical cancer.

Based on these results, other immunotherapies such as nivolumab and ipilimumab are currently being evaluated in phase 2 trials.45-48 Nivolumab and ipilimumab are monoclonal antibodies that target and block 2 different receptors that negatively regulate T-cell activation (PD-1 and CTLA-4, respectively), impacting the tumor’s defense against the immune system and boosting the immune system’s ability to fight the tumor. Inhibition leads to compromised activation and suppressed effector functions such as proliferation, cytokine secretion, and tumor cell lysis that block “immune checkpoints.”

The results of the GOG 240 were encouraging and resulted in improved oncologic outcomes, suggesting that the use of bevacizumab in combination with chemotherapy may become the standard of care for recurrent, advanced, or metastatic cervical cancer. As a consequence of this study, bevacizumab was approved by the FDA for use in cervical cancer in August 2014.

Additional studies are needed to determine whether bevacizumab is beneficial in combination with second-line chemotherapies or in patients with less advanced disease. Recently, Schefter et al published the complete results of RTOG 0417, exploring the safety and efficacy of the addition of bevacizumab to chemoradiation therapy.49 This phase 2 study showed that treatment was well tolerated and encouraging efficacy results were reported. These results warrant further investigation regarding whether bevacizumab can be used in patients who are not chemotherapy naïve or have been diagnosed with earlier stage cancers.

The role of immunotherapy is a promising and exciting new area of research that can potentially lead to further advancements in the treatment of locally advanced, recurrent, or metastatic cervical cancer. Development of the immune checkpoint blockade PD-1 and CTLA-4 inhibitors has shown promise and will need to be further studied as a means to achieve a durable response in cervical cancer.

Affiliations: Drs Yu and Garcia are from the University of Southern California, Norris Comprehensive Cancer Center.
Disclosures: Drs Yu and Garcia report that they have no relevant financial conflicts of interest to disclose.
Address correspondence to: Agustin A. Garcia, MD, Agustin.Garcia@med.usc.edu.