Molecular testing in thyroid cancer proposes many novel approaches to this disease. Traditional histologic diagnosis and classification of thyroid cancer may one day soon be refined by genomic profiling, a common theme in the era of precision medicine. An increasing understanding of the molecular pathogenesis of this disease has led to the discovery of driving somatic genetic alterations, largely explained by, although not limited to, the MAPK and PI3K pathways. Identification of these molecular markers suggests better methods to risk-stratify patients prior to surgery, reducing the number of thyroidectomies performed for benign nodules, and also identifying patients at risk for recurrence, or even dedifferentiation, into a more aggressive thyroid cancer, thus mandating more aggressive therapy approaches beyond traditional surgery and radioactive iodine therapy. Molecular profiling also offers tremendous benefit in the metastatic setting, as these patients typically do not respond to cytotoxic chemotherapy, and identification of targetable pathogenic lesions may select for more precise therapeutic options, such as the small molecular kinase inhibitors.

The discovery of several molecular markers in thyroid cancer heralds an exciting new era of precision medicine, allowing for refined prognostication and therapeutic strategy. The global incidence of thyroid cancer is rising rapidly, propelled by the increasing incidence of thyroid nodules diagnosed by ultrasonography.1 Although the mortality rate for thyroid cancer is relatively low, persistent and recurrent disease may occur in 20% to 30% of patients affected by this disease2; thus, a deeper understanding of its molecular pathogenesis is needed.

The progression of thyroid cancer is thought to be the result of an accumulation of genetic and epigenetic lesions that lead to perturbations in classical signaling pathways involved in cell proliferation and survival.4 The discovery of these molecular alterations has yielded several disease biomarkers that may contribute to our ability to diagnose and prognosticate. The Cancer Genome Atlas project recently studied 496 PTC cases, identifying driver mutations in all but <4% of cases, and finding that different molecular alterations lead to different pathologic and clinical features.5 In fact, as with many malignancies, classification of thyroid cancers by molecular rather than histologic subtype may one day be a more informative approach. These genetic alterations have also been linked to the loss of radioiodine (RAI) avidity in thyroid cancer, and have become the targets of novel drug therapy, suggesting that cure rates beyond conventional surgical thyroidectomy and adjuvant RAI ablation may be possible.

At the core of thyroid cancer pathogenesis are 2 classical signaling pathways, the MAPK and the PI3K-AKT pathways.6,7 Both of these pathways are coupled to the receptor tyrosine kinase (RTK) at the cell membrane, which transduces an extracellular growth stimulus that prompts downstream intracellular signaling (Figure). The MAPK pathway has a fundamental role in the regulation of cell proliferation, differentiation, apoptosis, and survival, and has been linked to tumorigenesis when disrupted. Once RTK is activated by an extracellular signal, downstream activation of RAS, followed by BRAF, MEK, and then ERK, occurs. ERK then enters the nucleus to induce tumor-promoting genes and downregulate tumor suppressor genes and thyroid iodide-handling genes. Several oncogenic mechanisms have been identified in association with this pathway, including aberrant genome-wide hypermethylation and hypomethylation,8 and upregulation of oncogenic proteins such as chemokines, matrix metalloproteinases, nuclear factor-κB, and vascular endothelial growth factor A, among many others.4 Many of these proteins have been identified as drivers of cancer cell proliferation, growth, migration, and viability. In thyroid cancer, common activating mutations of the MAPK pathway include BRAF9 and RAS10 mutations, RET-PTC rearrangement,11 and in some cases, ALK rearrangements.12 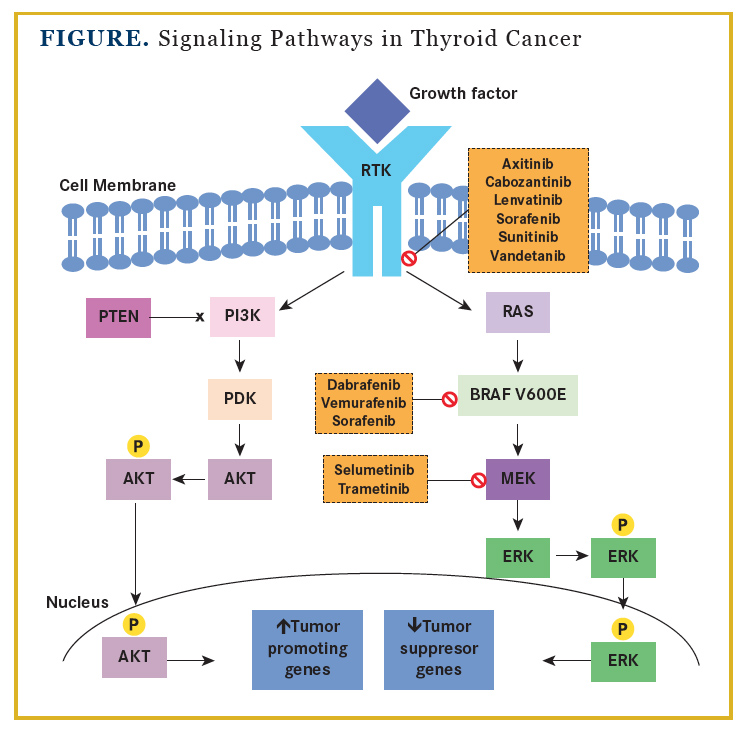 The PI3K-AKT pathway also plays a significant role in sporadic thyroid tumorigenesis. As with the MAPK pathway, an extracellular stimulus activates RTK at the cell membrane, and subsequently PI3K, ultimately leading to phosphorylation and activation of AKT.13 Activated AKT then enters the nucleus to upregulate tumor-promoting genes. Within the cytoplasm, activated AKT also activates other signaling molecules, including the mTOR pathway and phosphorylation of glycogen synthase kinase 3β. Common genetic alterations implicated in induction of the PI3K-AKT pathway include RAS and PTEN mutation or deletion, PI3KCA mutation or amplification, AKT1 mutation, and amplifications of the RTK genes.14

In the metastatic setting, BRAF inhibitors are part of the armamentarium of novel targeted treatments of DTC. Vemurafenib, a selective BRAFV600E inhibitor approved in BRAF-mutated melanoma, is currently being tested in the phase II setting for thyroid cancer. A study of 3 patients with metastatic PTC treated with vemurafenib found that time to progression (TTP) ranged from 11.4 to 13.2 months.21 These results prompted a larger phase II study that evaluated survival outcomes associated with vemurafenib in 51 patients with progressive BRAFV600E-mutated PTC refractory to RAI therapy.22 After 6 months, the best overall response rate (ORR) was 35% in patients naïve to tyrosine kinase inhibitor (TKI) treatment, and 26% in patients previously treated with TKI therapy. While larger cohorts need to be studied, these results are promising in comparison with outcomes achieved with systemic chemotherapy, where duration of response is typically <6 months. Additionally, the usage of trametinib, a MEK inhibitor, in conjunction with dabrafenib -- an approach that demonstrated increased survival benefit in patients with BRAF-mutant metastatic melanoma23 -- is currently under investigation in an ongoing, randomized, phase II trial in patients with recurrent PTC.24

High levels of vascular endothelial growth factor (VEGF 1,2,3), the dominant growth factor in angiogenesis, have been found in DTC and MTC. In experimental models, interference with VEGF blocked the proliferation of DTC cells.25 VEGFR-2 is often overexpressed in both MTC cells and supporting vasculature. It is thought that simultaneous targeting of both MET and VEGFR-2 provides an antitumor effect.

Several TKIs that target VEGF receptors have been studied in metastatic RAI-resistant DTC, but only 1 has received FDA approval. Sorafenib, a multikinase inhibitor of VEGFR-1, -2, and -3, RET, BRAF, and platelet-derived growth factor, was approved by the FDA in 2013 based on data from the DECISION trial, a phase III placebo-controlled trial with 417 patients.26 Patients treated with sorafenib showed a significant improvement in median progression free survival (PFS) compared with placebo (10.8 months vs 5.8 months; P <.0001). Overall survival (OS) did not differ significantly between the groups; however, crossover was allowed in this trial. A total of 11 patients discontinued therapy, most commonly due to hand-foot skin reactions.

Lenvatinib, an inhibitor of VEGFR1-3, FGFR1-4, PDGFR-β, RET, and KIT signaling networks, was studied in the randomized, double-blind, phase III SELECT trial, which evaluated 392 patients with progressive, RAI-refractory thyroid cancer.27 Patients treated with lenvatinib demonstrated a 64.8% response rate. Additionally, median PFS was 18.3 months in the lenvatinib group versus 3.6 months in the placebo group (P <.0001). OS was not reached in either group; however, crossover was also allowed in this trial due to significant response rates.

Several TKIs have been studied in phase II trials. In a study of 145 patients with RAI-resistant metastatic DTC, vandetanib, an inhibitor of RET, VEGFR-2, VEGFR-3, and epidermal growth factor receptors, improved PFS compared with placebo (11.1 months vs 5.9 months; P = .0007).28 A total of 24 patients (33%) discontinued treatment due to toxicity, QTc prolongation, and diarrhea. A phase III study is currently under way. Axitinib, a selective inhibitor of VEGFR, was studied in 60 patients with advanced thyroid cancer of any histology. The ORR was 38%.29 Another study of 52 patients with advanced MTC or RAI-resistant DTC demonstrated an ORR of 35% and median PFS of 16 months.30 Motesanib, an inhibitor of VEGFR-1, -2, -3, PDGF, and KIT, was studied in 93 patients, and resulted in 49% of patients with either confirmed partial response (PR) or durable stable disease (SD) and an estimated PFS of 40 weeks.31 Five patients developed cholecystitis, which has not been reported with other angiogenesis inhibitors. Pazopanib, an inhibitor of c-KIT, FGFR, PDGFR, and VEGFR, was studied in a single-arm study of 39 patients.32 Treatment led to PR in 49% and a median PFS of 11.7 months.

Sunitinib, which inhibits VEGFR, PDGF, and RET, was tested in 29 patients with positron emission tomography (PET)-positive, RAI-refractory DTC,33 and at 6 months, 28% of patients showed a response and 77% had SD. New preliminary data show potential for use of sunitinib as second-line therapy in patients who have failed treatment with sorafenib. In 3 patients with metastatic RAI-refractory DTC who received sequential treatment of sorafenib followed by sunitinib, there was restoration of antineoplastic activity as confirmed by biochemical PR and detection of tumor necrosis.34 Cabozantinib, an inhibitor of VEGFR-2, MET, and RET, was recently investigated in a small phase I study of 15 patients with advanced DTC who progressed on standard RAI therapy, finding a similar safety profile to other multitargeted VEGFR inhibitors.35 A National Cancer Institute– sponsored phase II trial is currently open for accrual to evaluate the use of cabozantinib as second-line therapy in patients with refractory DTC.36

A novel area of development is usage of TKIs as RAI re-sensitizing agents. Survival is significantly lower in patients with non-RAI avid disease, with a 10-year survival rate of only 10% versus 60% in patients with iodine-avid disease.37 Animal studies found that inhibition of BRAF or MAPK allowed RAI-resistant thyroid cancers to regain the ability to take up iodine. A pilot study evaluated 20 patients with metastatic, RAI-refractory DTC who were treated with selumetinib, a MEK inhibitor.38 Selumetinib increased iodine uptake in 12 patients, and 8 were retreated with RAI. Of these 8 patients, 5 had confirmed PR and 3 had SD, suggesting that MEK inhibition therapy can lead to RAI re-sensitization. This study has led to the development of the randomized, double-blind, placebo-controlled, phase III ASTRA trial to compare complete response (CR) rates obtained with adjuvant selumetinib in addition to adjuvant RAI, versus placebo plus RAI in patients with newly diagnosed DTC at high risk for primary treatment failure.39

The use of dabrafenib, a selective BRAF inhibitor, was also evaluated in 10 patients with BRAFV600E mutations.40 Six patients demonstrated new RAI uptake following treatment. These patients were then treated with RAI, and 2 patients experienced PR and 4 patients demonstrated SD at 3 months; additionally, thyroglobulin decreased in 4 of these 6 patients.

Uncovering the molecular pathobiology of thyroid cancer has driven the development of targeted drug therapies that have revolutionized the way we approach thyroid cancer—a theme that pervades modern medical oncology in the era of major genomic breakthroughs.41 Additionally, these molecular targets may also serve as practical biomarkers that may be utilized to predict a patient’s risk for developing thyroid cancer, such as in the preoperative setting, or risk of cancer recurrence. Our understanding of the genetic and epigenetic alterations involved in thyroid carcinogenesis undoubtedly provides opportunity to treat each patient more precisely, and in the metastatic setting, identifies targeted therapies that may offer significant survival benefit that rivals our dismal experience with traditional cytotoxic chemotherapy.

Disclosures: Drs Tanaka, Sindura, and Oh have no relevant conflicts of interest to disclose. Dr Cohen has served as a consultant and speaker for Bayer and Eisai.