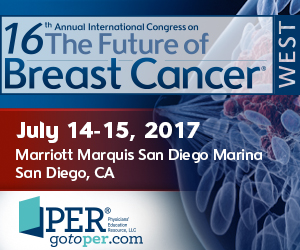 April 24, 2017—Today, Eli Lilly and Company announced the MONARCH 3 trial (NCT02246621) has met its primary endpoint of improvement in progression-free survival (PFS). The Phase III trial evaluated abemaciclib (LY2835219), an inhibitor of cyclin-dependent kinases CDK4 and CDK6, in combination with an aromatase inhibitor (either letrozole or anastrozole) in comparison to treatment with an aromatase inhibitor alone. The trial was conducted in postmenopausal women with hormone-receptor-positive (HR+), human epidermal growth factor 2-negative (HER2-) advanced stage breast cancer with no prior systemic treatment for advanced disease.

"It is very exciting to hear that abemaciclib significantly improved patients' duration of breast cancer control in combination with fulvestrant. I very much look forward to having this agent available in my practice for patients with ER+ [estrogen-receptor-positive] metastatic breast cancer," said Joyce O'Shaughnessy, M.D., Chair of the 16th Annual International Congress on the Future of Breast Cancer® West and Co-Chair of 16th Annual International Congress on the Future of Breast Cancer®East; Women Chair in Breast Cancer Research Baylor University Medical Center Texas Oncology Chair, Breast Cancer Research Program The US Oncology Network. "I am very impressed with the antitumor activity of abemaciclib in patients whose metastatic breast cancer has been previously treated with other therapies, as was seen in the MONARCH 1 trial, as well as in patients with ER+ brain metastases. Abemaciclib's availability once approved by the FDA will offer an important, new, non-cross-resistant treatment option for our patients."

A total of 493 patients were randomized to receive 150 mg of abemaciclib or placebo orally twice daily in combination with either 1 mg of anastrozole or 2.5 mg of letrozole once daily until disease progression or unacceptable toxicity. Key secondary endpoints included objective response rate (ORR), overall survival (OS) and safety. Adverse events were consistent with previous studies of abemaciclib, the most common adverse events being diarrhea, neutropenia, fatigue, and nausea. 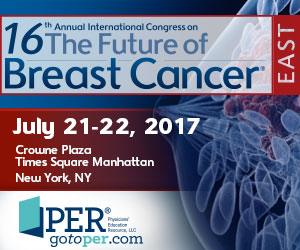 In 2015, abemaciclib was granted Breakthrough Therapy Designation by the U.S. Food and Drug Administration based on data from the company’s Phase I trial, JPBA (NCT01394016), which studied the efficacy and safety of the drug in women with advanced or metastatic breast cancer. Other trials involving abemaciclib include MONARCH 1 (NCT02102490), which investigated the effects of the drug in patients with at least two previous courses of chemotherapy, and MONARCH 2 (NCT02107703), which investigated the effects of abemaciclib in combination with fulvestrant. The results of MONARCH 1 and MONARCH 2 are expected to be submitted this quarter.

Lilly is currently recruiting patients for the Phase II monarcHER (NCT02675231) trial, which is evaluating treatment of abemaciclib with trastuzumab (with or without fulvestrant) in women with HR+, HER2+ locally advanced metastatic breast cancer with at least two prior HER2-directed therapies. Further, Lilly is also investigating abemaciclib in patients with lung cancers, pancreatic cancer, as well as brain metastases.

Detailed efficacy and safety results of MONARCH 3 will be presented at a medical meeting later this year.