Breast cancer is the most common malignancy in women, and most patients will present with early- stage disease. Multiple clinical trials have established the oncologic equivalence of the various treatment options available to these patients; however, each treatment approach is associated with varying degrees of complication rates, costs, and patient satisfaction. Reconciling these factors to formulate the “best” treatment plan for each individual patient can be a challenge. For example, a given intervention may result in high patient satisfaction at the expense of in- creased cost and complications. Conversely, an intervention with a low cost and low complication rate may result in poor patient satisfaction. Thus, a value-based approach, which aims to offset these often-competing factors, can optimize patient outcomes while reducing overall costs. Ongoing efforts seek to accurately and comprehensively define value for early breast cancer treatment strategies in order to optimize healthcare resource allocation. Population-based studies using registry or private insurance data have shed light on the cost of primary oncologic interventions and secondary costs from managing complications. Patient satisfaction has been assessed with survey data, and continues to be a subject of ongoing investigation.

In this article, the authors review some of the salient data that can be used as a starting point for discussing management principles in a way that optimizes value to the benefit of the patient and the larger healthcare system. A path forward that emphasizes leveraging research efforts to define value and engaging patients in value-based treatment decisions is proposed.

The Impetus for a Value-Based Approach

Approximately 157,000 women diagnosed this year with localized breast cancer will be presented with a wide array of guideline-concordant treatment options, including breast-conserving surgery (BCS) alone, mastectomy alone, unilateral or bilateral mastectomy with reconstruction, BCS with whole-breast irradiation, or BCS with partial-breast irradiation delivered via external-beam radiation therapy (EBRT) or brachytherapy.1,2 Over the past decade, the incidence of both unilateral and bilateral mastectomy followed by reconstruction has increased among patients who would be eligible for BCS-based interventions.3-5 For the patient and her physicians, the choice of local therapy is complex and is influenced by a multitude of factors, including access to reconstruction, desire for a favorable cosmesis, risk of complications, cost, and perception of and tolerance of recurrence risk.6,7 The challenge of choosing a therapy that reconciles many oftentimes competing factors in the setting of limited resources can be surmounted by a value-based approach to decision making. Value optimization aims to improve the full set of patient-reported and clinical outcomes without increasing total costs, or conversely, to reduce total costs without negatively impacting outcomes.8 When thought of as a ratio (Figure), patient satisfaction and oncologic outcomes occupy the numerator of the value ex- pression, while costs and complication event rates—which should be minimized—occupy the denominator.

Breast-Conserving Surgery With Radiation Is a High-Value Treatment Option

Early-stage breast cancer is the most common cancer diagnosis in women, and maximizing the value of delivered care for this disease can improve patient outcomes and reduce overall cost and healthcare resource utilization. The overall and disease-free survival equivalence of mastectomy compared with BCS followed by radiotherapy (RT) in early-stage breast cancer has been established by mature data from several large, randomized, controlled trials in North America and Europe.9-11 With excellent oncologic outcomes, increasing attention has been directed to assessing and improving value by decreasing costs, decreasing complications, and improving satisfaction with cosmesis or posttreatment quality-of-life indices.

Determining total costs is a challenging endeavor because of the fragmented nature of healthcare delivery, nonstandardized treatment approaches, and lack of consensus on what constitutes cost.8 Nevertheless, a comprehensive approach that accounts for the total costs incurred as the patient navigates the entire medical system may unmask inefficiencies or reveal the value of interventions that may be more costly upfront, but may also lead to improved outcomes or cost savings in later phases of care. For this reason, cost analysis should include all costs incurred through diagnosis, primary management, management of treatment-related complications, and follow-up.

Cost differences between mastectomy and breast-conserving therapies appear to be magnified in the younger (<65 years), privately insured patient population. In an analysis of claims data from the MarketScan database for patients with locoregional disease, nearly 20% of patients who underwent implant or immediate reconstruction following mastectomy required treatment for infection, including hospitalization for intravenous antibiotics or additional surgical procedures, within the first 2 years of diagnosis. Autologous reconstruction was associated with a higher initial hospital stay and a higher 30-day rehospitalization risk, and implant reconstruction following mastectomy resulted in higher odds of wound complications or infections compared with nonreconstructive interventions. The estimated difference in cost due to managing complications was approximately $8600 per patient ($10,400 for mastectomy with reconstruction vs $1800 for BCS with hypofractionated RT), with an overall cost difference of $24,700 per patient.13 When considering the total number of patients treated with mastectomy and reconstruction, the maximal global excess cost burden (compared with BCS with hypofractionated RT) was approximately $88.3 million, with approximately 35% of this difference attributable to the management of complications.

Many women who are involved in the decision-making process and demonstrate an understanding of anticipated recurrence and survival outcomes ultimately opt for mastectomy-based treatment options, particularly for “peace of mind.”6,14 However, patients’ satisfaction with overall cosmetic outcomes following BCS with RT has been found to compare favorably to mastectomy with either autologous or implant-based reconstruction.15,16 Despite consistently higher costs and complication rates, and equivalent patient satisfaction when compared with BCS strategies, mastectomy-based treatment approaches still may be the best option for some patients. While more than half of patients in the SEER-Medicare cohort underwent BCS with or without RT, more than half of patients in the MarketScan cohort underwent mastectomy. Among mastectomy-based treatments, mastectomy without reconstruction (estimated cost of $48,000 for MarketScan and $22,000 for SEER-Medi- care) was the most common surgical approach.13 Mastectomy alone could be considered a high-value option when considering cost, reduced treatment-related complications, and comparable disease control; however, the poor cosmetic outcome, increased risk of decision regret, and decreased patient satisfaction may decrease its overall value compared with more costly interventions such as BCS with RT and compared with mastectomy with reconstruction.17

Low-cost care is not always synonymous with higher-value care, particularly when it leads to poor oncologic outcomes. It is unclear why several hundred patients from the MarketScan database underwent BCS alone for their breast cancer, since the 2 randomized trials supporting omission of RT following BCS were limited to women older than 65 or 70 years with favorable pathologic factors. However, this is illustrative of the potential pitfall of focusing solely on cost reduction as a strategy to maximize value, as lower upfront costs may be offset by an increase in late costs, particularly in poorly selected patients who have an increased risk of recurrence without adjuvant RT. In this cohort, the total cost of proceeding with BCS alone ($70,500) exceeded BCS with conventional RT by approximately $5000 per patient when accounting for late complications, which included salvage surgery for recurrent disease.13 In the appropriately selected group of patients, omission of RT following BCS could very well be a high-value treatment option, with a low cost, decreased side-effect profile and acceptable local control rates.19,20 This is reflected in SEER-Medicare claims data, which revealed the cost of BCS alone to be $20,900—the lowest overall cost for all guideline-concordant therapies across all analyzed datasets.13 Thus, BCS alone can be an extremely high-value treatment approach, but only in a judiciously selected patient population.

BCS with RT continues to be a high-value local therapy for early-stage breast cancer, and advances in RT techniques have continued to improve the value of this therapeutic paradigm by lowering costs and improving patient-reported outcomes and treatment-related toxicities. Hypofractionated RT is an example of a treatment technique that has increased value by reducing costs and treatment-associated toxicity without compromising oncologic outcomes.21-23 In hypofractionated RT, the dose of radiation delivered per daily treatment is increased while the total number of treatments is decreased. Compared with conventional fractionated RT, which may require up to 36 daily treatments, hypofractionated RT, which can be completed in as few as 15 daily treatments, can lead to a significant reduction in healthcare expenditures, and when clinically appropriate, is estimated to reduce overall costs by an estimated $2500 to $4500 in the MarketScan and SEER-Medicare populations com- pared with conventional RT.13,24 On a global scale, if all MarketScan patients underwent hypofractionated RT, the maximal absolute cost savings based on nearly 5000 patients treated with conventional RT would be approximately $12 million for the MarketScan population and $19.5 million for the SEER-Medicare population. These are likely conservative estimates, as a National Cancer Database study estimated a potential $164 million in annual savings.25 In resource-limited settings, hypofractionated RT may also increase the number of patients who have access to RT.26

Aside from reducing the time burden for patients as well as increasing utility of treatment machines, hypofractionated RT has been associated with lower rates of acute skin toxicity and improved fatigue over conven- tional RT.22 Longitudinal assessments of patient-reported outcomes or physician-rated cosmesis have not revealed a difference between hypofractionated and conventional RT.27 Recognized as a high-value treatment option, BCS followed by hypofractionated RT may be preferred over more-aggressive surgical approaches, although both interventions are equally recommended by the National Comprehensive Cancer Network consensus guidelines for the management of early-stage breast cancer.28 Despite its demonstrated high value, adoption of BCS with hypofractionated RT in the United States has been relatively slow.29

Optimizing value is not a one-size-fits-all endeavor because patients will invariably present with different treatment goals. When formulating a treatment plan, discussions with patients should include expected longitudinal outcomes as well as the added risks of complications and increased costs in order to arrive at a high-value consensus treatment plan. These discussions can be enhanced with the help of shared decision-making tools that can provide individualized predictions of these outcomes.30,31 Future efforts should be focused on reducing complication rates by improving existing treatment techniques, formulating toxicity/complication prediction models, and investigating cost-efficient alternatives that produce equivalent oncologic outcomes.

Author disclosures: The authors have no relevant financial relationships to disclose. 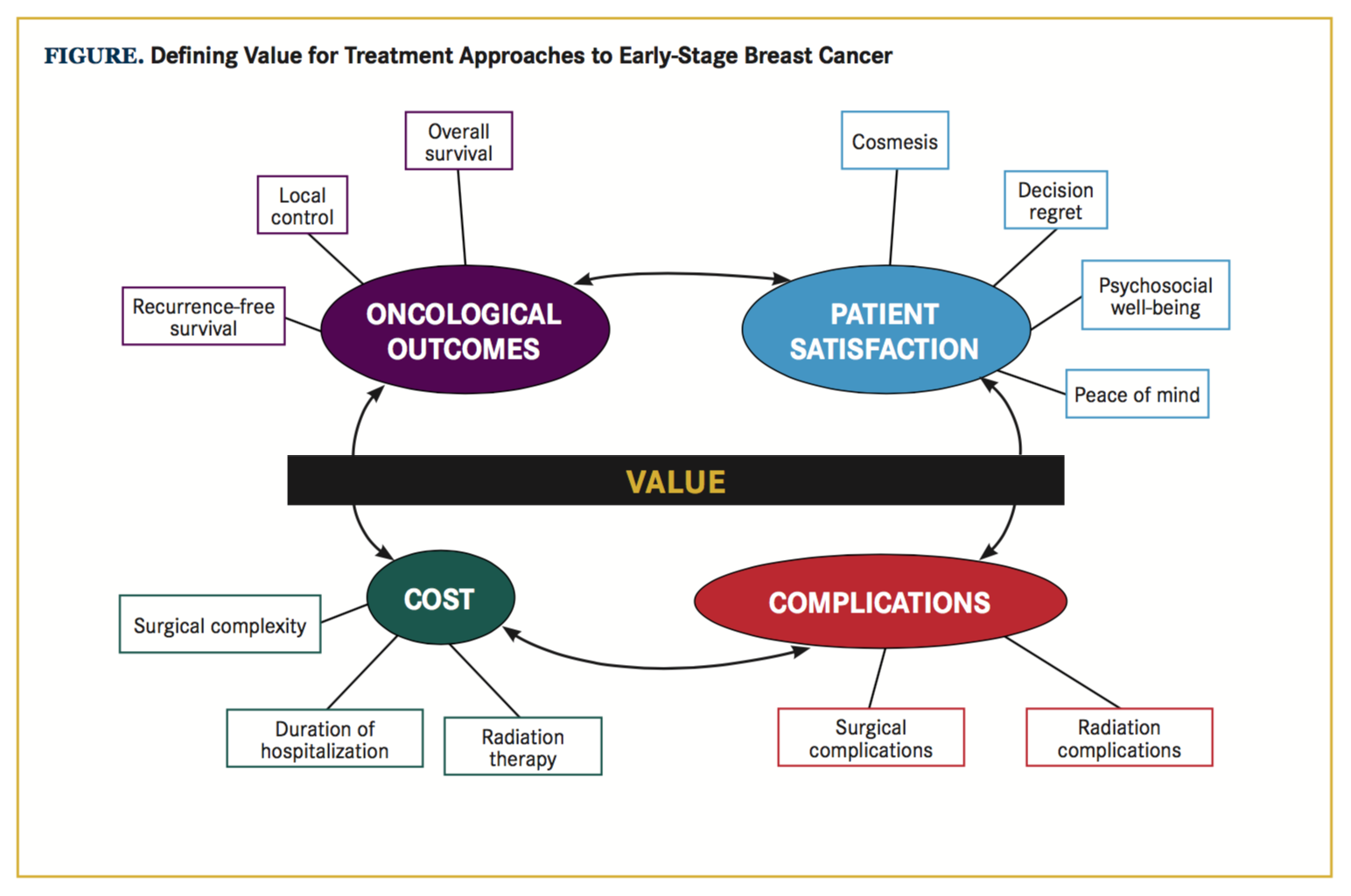