Myeloproliferative neoplasms (MPNs) include phenotyp- ically diverse groups of clonal disorders, characterized by proliferation of 1 or more components of the myeloid lineage.Traditionally, chronic myelogenous leukemia (CML), essential thrombocytosis (ET), polycythemia vera (PV), and primary myelofibrosis (PMF) were grouped together as MPNs.1 Later, CML was found to be associat- ed with a unique translocation between the long arms of chromosome 9 and 22 (BCR/ABL gene fusion), separating CML from other MPNs.The JAK2 V617F (Janus–associated kinase) mutation and its association with ET, PV, and PMF was discovered in 2005. Traditionally, the coexistence of JAK2 V617F and BCR/ABL was considered mutually exclusive.

Here we present a case of JAK2 V617F–positive PV, evolving to BCR/ABL–positive CML. Our case demonstrates there were 2 separate clones, harboring JAK2 V617F and BCR/ABL mutation. We have noticed an increase in the JAK2 V617F mutational burden in patients who are administered tyrosine kinase inhibitor (TKI) therapy.Treatment with aTKI and a JAK inhibitor is the most reasonable approach in these patients.This case illustrates the importance of screening for BCR/ABL in PV or other MPNs when an atypical clinical course is encountered.

In 1999, a 68-year–old man presented with hematocrit of 50, and associated leukocytosis, erythrocytosis, thrombocytosis and splenomegaly (2-4 cm below the left costal margin). He was treated with hydroxyurea, aspirin, and intermittent phlebotomies (averaging 3-4 times per year). There were no major thromboembolic or bleeding events. A bone marrow (BM) biopsy performed in 2006 showed hypercellular marrow with trilineage hematopoiesis and megakaryocytic hyperplasia  with focal clustering. There was no evidence of dysplastic changes. Focal mild increase in reticulin fibers was seen. This was similar to the BM biopsy performed at the time of his initial diagnosis in 1999. In 2010, he underwent a second BM biopsy (due to elevated white cell count from baseline 15-18 × 103/mcL to 24 × 103/mcL), which was no different from the earlier one, except for moderate grade 1-2 reticulin fibrosis. At this time, a full panel of molecular tests for myeloproliferative neoplasms (MPNs) was run. He was found to have JAK2 V617F mutation with allele burden of 49%. Myeloproliferative leukemia mutation was negative. Cytogenetic analysis was positive for deletion 20q12 without any other chromosomal abnormalities.

In June 2012, there was a further increase in white blood cell count from baseline of 20 × 103/mcL – 30 × 103/mcL to 60 × 103/mcL – 80 × 103/mcL. At this time, the patient exhibited a progressive increase in splenomegaly (6-8 cm below the costal margin). There was concern for progression to secondary myelofibrosis or acute leukemia. At this point, a third BM biopsy was performed (13 years from the initial presentation and diagnosis of polycythemia vera [PV] and 2 years from his last BM biopsy). The BM was hypercellular with moderate reticulin fibrosis.

There was no evidence of blast transformation. Cytogenetic analysis was positive for 2 abnormal clones; 14 cells were positive for t(9;22) (q34.q11.2), which was a new finding; and 6 cells exhibited deletion of the long arm of chromosome 20 (a previously known abnormality). There were no cells with dual abnormality. Fluorescent in situ hybridization (FISH) for BCR/ABL1 rearrangement (break point: cluster Abelson) was positive (51.5% [103/200 nuclei]). Quantitative reverse transcription polymerase chain reaction for BCR/ABL transcript was 1.482% (e13a2). Thus, a case of chronic phase chronic myelogenous leukemia (CML) was diagnosed in this patient, who had a preexisting diagnosis of JAK2-positive PV for 12  years.

The patient was subsequently treated with dasatinib. Two weeks after that therapy, he was admitted to the hospital for shortness of breath and was found to have pleural effusions. Treatment was then switched to imatinib. He was able to achieve major molecular response with imatinib therapy; however, his splenomegaly persisted and he did not have a hematologic response. During this time, the patient also developed constitutional symptoms, such as fatigue and early satiety. Another BM biopsy was performed 6 months from the start of tyrosine kinase inhibitor (TKI) therapy. This was a dry tap, with no aspirate. The biopsy showed marked hypercellularity, extensive myelofibrosis, and no increase in blasts. Morphologic findings were consistent with post-PV myelofibrosis. Only 15 metaphases were able to be retrieved and all of them had deletion of 20q11.2. There were no metaphases with the Philadelphia chromosome.

Subsequently, the JAK2 V617F allele burden increased from 49% to 80% (11 months since initiation of TKI therapy). He continued to be in complete molecular response, so the etiology for worsening counts and constitutional symptoms was thought to be from post–PV myelofibrosis. Ruxolitinib, a JAK inhibitor, was initiated, after which splenomegaly and constitutional symptoms improved. He was also started on erythropoietin therapy for anemia. After almost 21 months on TKI therapy and 10 months since starting ruxolitinib, we noted an increase in BCR/ABL levels. Mutational studies for the BCR/ABL kinase were negative. Mutational studies for JAK2 were performed that revealed classic JAK2 V617F with no new findings. Hence, a BM biopsy was performed (22 months from the diagnosis of CML and TKI initiation), which showed chronic phase CML with no blast phase. TKI therapy was switched to nilotinib. The patient again was able to achieve complete molecular response. He was treated with both the TKI and JAK inhibitor for over 3 years.

He was on erythropoietin (intermittently since 8 months from the diagnosis of CML) and subsequently started on danazol (3 years from the diagnosis of CML) for symptomatic anemia requiring blood transfusions. He eventually developed a significant decline in performance status and worsening B symptoms (3.5 years from the diagnosis of CML and 17 years from his initial diagnosis of PV). He also developed worsening anemia, thrombocytopenia, and splenomegaly. BM biopsy at this time. (3.8 years from the diagnosis of CML) showed mild hypercellular BM with severe reticulin fibrosis (grade 3). Morphologic finding was indicative of development of secondary myelofibrosis with underlying MPNs. Bone marrow fluorescence in situ hybridization (FISH) was negative for BCR/ABL. Cytogenetic analysis was positive for persistent clone of cells with deletion of long arm of chromosome 20 (this cytogenetic abnormality was seen throughout the disease course since the PV diagnosis in 1999). Two cells showed additional abnormality for deletion of chromosome 7q. There were no cells with t(9; 22), indicating progressive disease is driven by JAK2-positive PV and post-PV myelofibrosis rather than CML.

During his long course, the patient developed pulmonary hypertension, which also progressed with time. Pulmonary hypertension was thought to be from long-standing myeloproliferative disorders and TKI use. He succumbed from the above complications at the age of 84.

MPNs include a heterogeneous group of disorders, primarily CML, essential thrombocytosis (ET), PV, and primary myelofibrosis (PMF).1 CML is characterized by Philadelphia chromo- some translocation between the long arms of chromosome 9 and 22. Excluding CML, other MPN disorders are associated with mutations, such as JAK2 V617F,2 cMPL,3 and calreticulin.4 Of these, the JAK2 V617F mutation is positive in more than 90% of patients with PV5 and more than 50% of patients with ET or PMF.5-8

Traditionally, the existence of BCR/ABL and JAK2 V617F mutation were considered mutually exclusive.9-11 However, there has been enough literature indicating that the coexistence of JAK2 V617F and BCR/ABL is not that uncommon. It has been reported to occur concomitantly7,12-16 or at transformation from ET,17,18 PV,8,19-21 or PMF19 to CML. There have been reports of CML evolving to JAK2–positive MPNs.12,22 Retrospectively, most of the later cases were found to have JAK2 V617F at the time of CML diagnosis.13 The emergence of JAK2 V617F was also reported to occur after exposure to TKI therapy.7,23,24 This is thought to result from unmasking of preexisting Philadelphia-negative MPNs due to CML treatment. Other possible explanations for this could be the fact that the Philadelphia chromosome’s association with CML has been known since the 1960s, but JAK2 V617F is a relatively new discovery. As a result, this could account for reporting bias due to lack of awareness.

Recently, the results of 2 studies have reported the incidence of JAK2 V617F to range from 26% to 44%16,25 in newly diagnosed CML cases, which is relatively higher than expected. It is not known which of these mutations occurs first. The majority of cases reported were JAK2–positive PV, ET, and PMF that later evolved to CML. Conchon et al and other studies reported acquisition of BCR/ABL to be a secondary event in a JAK2–positive clone.26

Whether coexistence of JAK2 V617F in CML alters the natural course of the disease or not is not well known. The results of one study indicated that presence of the JAK2 V617F mutation can predict early progression of CML.16 Acquisition of BCR/ABL is also thought to induce more potent signaling leading to higher proliferation than JAK2 V617F mutation.19,21

It is not well known if single clones of cells acquire dual abnormality versus separate subclones emerging with addition- al mutations. Few studies showed emergence of dual abnormality at the single cell level7,21,23,27,28; on the contrary, some studies showed emergence of abnormalities to be sequential in subclones.29,30 A study by Yamada et al examined the CD34-positive cells at the time of CML emergence in a patient with JAK2–positive PMF and found that BCR/ABL translocation was acquired in the preexisting heterozygous JAK2–positive clones; interestingly, no colony contained BCR/ABL transcript in the absence of JAK2 mutation.19,21 In our case, we have demonstrated that there were 2 separate clones: 1 harboring deletion 20q (which was seen throughout the disease course) and the other BCR/ABL. The 2 clones seem to have developed independent of each other since at no time could we identify evidence of a single cell with both the deletion 20 and the Philadelphia chromosome; it is possible that the patient had 2 independent MPNs that appeared sequentially. An alternative explanation could be that there was a common precursor and the 2 clones evolved separately.

Although TKI therapy in patients with JAK2 V617F–positive CML patients was successful in suppression of the BCR/ABL clone, it had no effect on the JAK2 V617F clone.29 The number of JAK2 clones increased while the patient was administered TKI therapy.22,29-32 There was only 1 report in which TKI treatment of CML resulted in disappearance of the JAK2 clone after achieving partial cytogenetic response.12

Based on our case and review of literature, there is enough evidence supporting the coexistence of JAK2 V617F and BCR/ ABL; in fact, its incidence could be higher than reported. BCR/ ABL testing should be conducted in cases like ours, when patients with longstanding JAK2–positive MPN develop a high white cell count or apparent disease progression, as CML may be concomitantly present. In our case, we demonstrated 2 separate clones independent of each other, which also are supported by the increase in the JAK2 V617F allele burden and BCR/ABL levels after initiation of TKI and ruxolitinib therapy, respectively. 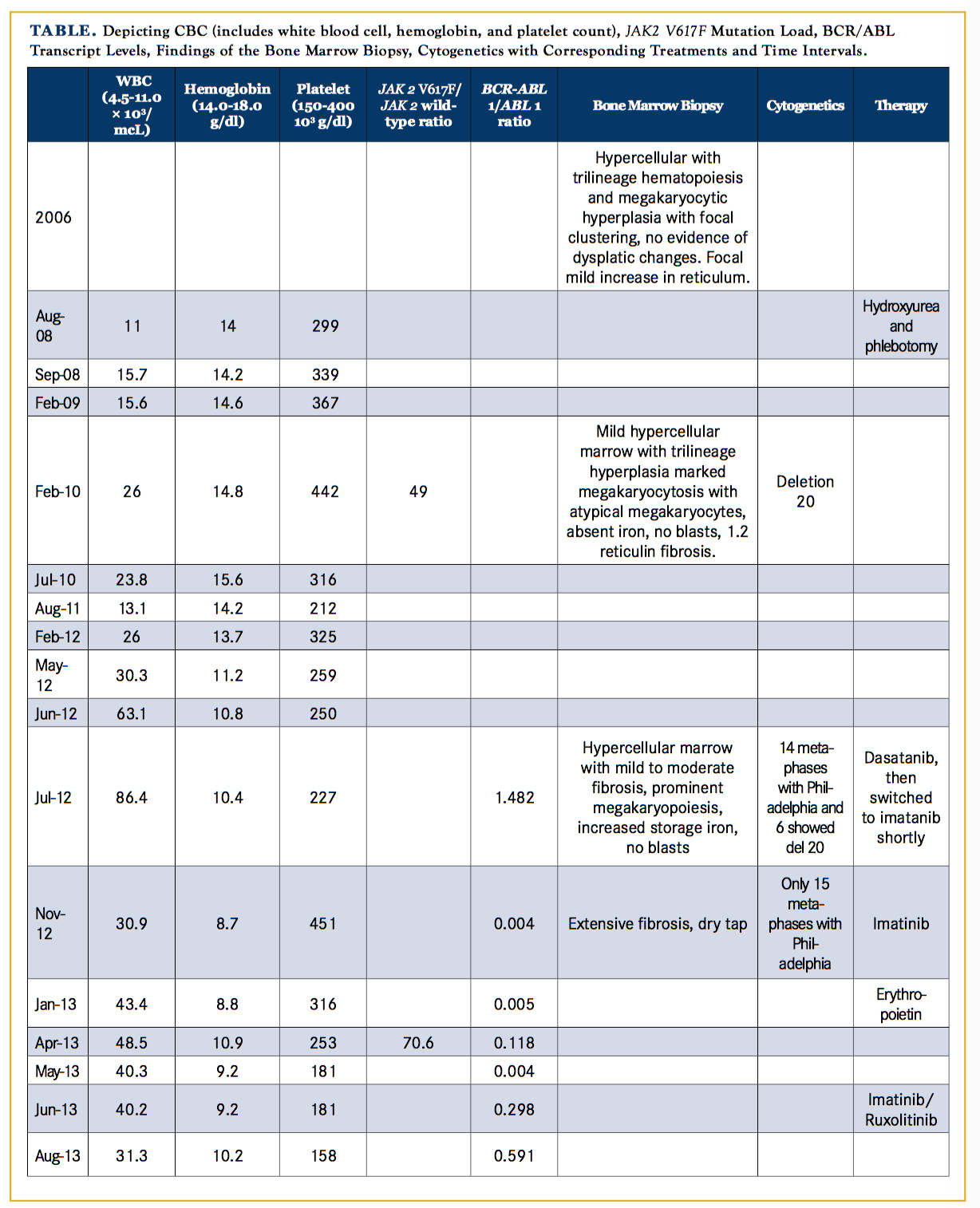 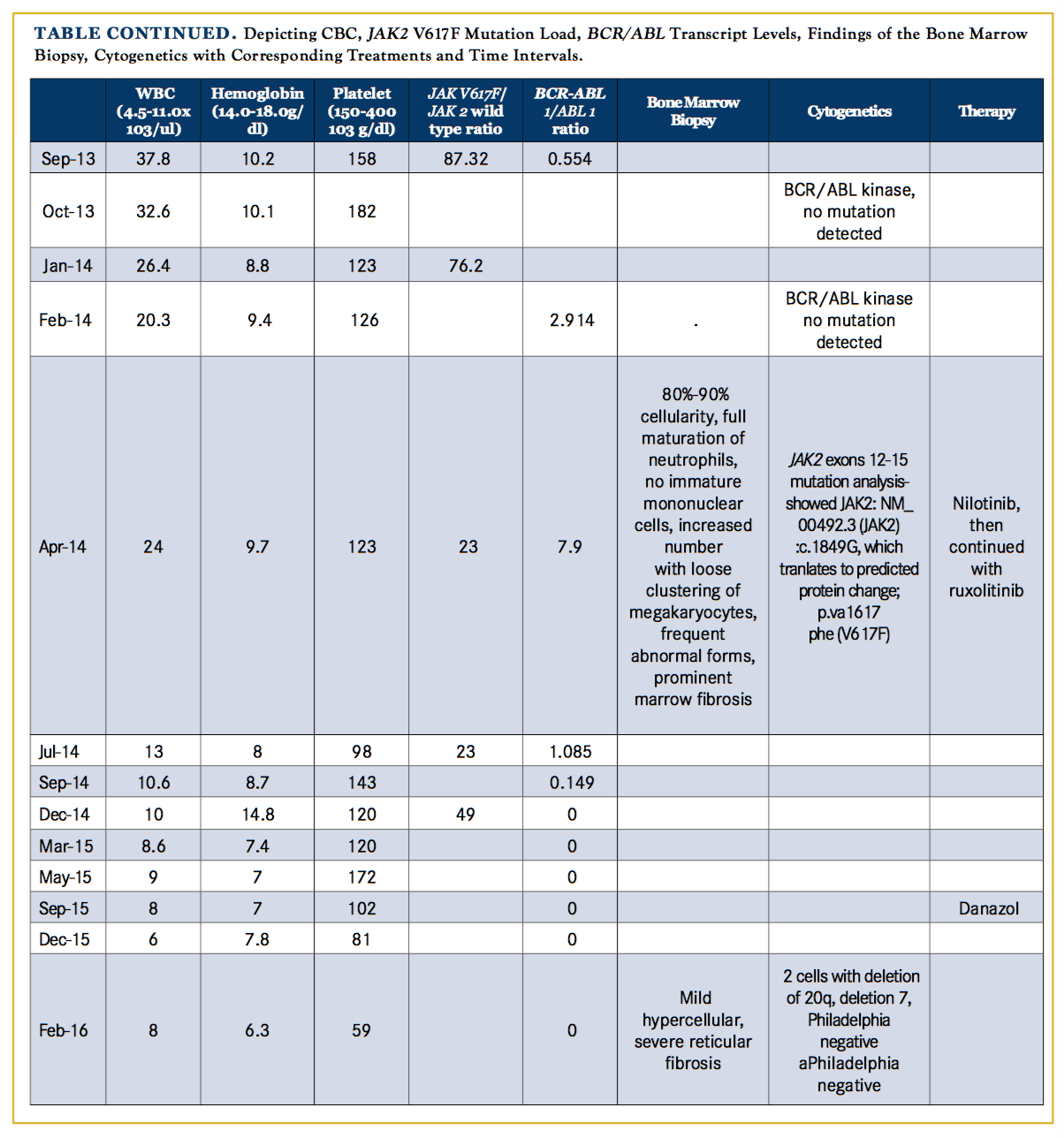