Cell-cycle inhibition is a new standard-of-care therapy in estrogen-receptor–positive metastatic breast cancer (MBC). The rapid integration of cyclin-dependent kinase (CDK) 4/6 inhibitors into mainstream clinical practice has led to many important investigations into biomarkers of response, mechanisms of resistance, sequencing of therapies, the role of other CDK4/6 inhibitors, and usage in other breast cancer subtypes. Here, we review the current state of palbociclib, ribociclib, and abemaciclib as CDK4/6 inhibitors in MBC, with particular attention to ongoing clinical trials in breast cancer.

Anti-CDK4/6 agents inhibit the phosphorylation of the retinoblastoma (Rb) tumor suppressor, which promotes Rb-E2F binding and prevents E2F-mediated oncogenic transcription. Slamon and colleagues showed compelling preclinical data indicating the efficacy of palbociclib in estrogen receptor positive (ER+) breast cancer cell lines. These experiments established that in the absence of hormonal therapy, palbociclib is cytostatic, and that when combined with estrogen blockade, there is a synergistic decrease in cell proliferation.

The success of palbociclib has spurred the development of other CDK4/6 inhibitors including ribociclib, which is now FDA approved in combination with fulvestrant, and abemaciclib, which has been granted an FDA breakthrough therapy designation. Numerous clinical trials are investigating these CDK4/6 inhibitors in settings beyond metastatic disease (Table), including adjuvant and neoadjuvant trials and novel combinations with other targeted therapies and immunotherapies. Therefore, it will be of great interest to see where these drugs show efficacy and if there may be differential activities among the inhibitors.

Palbociclib has a half-maximal inhibitory concentration (IC50) for CDK4/6 of 9 to 15 μM.8 The most frequent adverse events (AEs)of palbociclib are neutropenia, thrombocytopenia, and fatigue. The most frequent grade 3/4 AEs are pulmonary embolism (4%) and diarrhea (2%). Palbociclib is dosed at 125 mg twice daily, 3 weeks on and 1 week off. Importantly in clinical trials, few patients had febrile neutropenia.

Ribociclib has an IC50 for CDK4/6 of 11 to 39 μM.8 The most frequent AEs with ribociclib are neutropenia, nausea, and thrombo- cytopenia. The most frequent grade 3/4 AEs are neutropenia and thrombocytopenia. Of note, aspartate aminotransferase/alanine aminotransferase increases (15%) and corrected QT interval prolongation were observed (8%); therefore, serial liver-function test monitoring and electrocardiograms are recommended when prescribing ribociclib. Ribociclib is dosed at 600 mg daily, 3 weeks on and 1 week off.

Abemaciclib has an IC50 for CDK4/6 of 2 to 5 μM,8 and it can penetrate the blood-brain barrier. The most frequent AEs of abemaciclib are neutropenia and diarrhea. Almost all patients will also have an asymptomatic creatinine increase, which is an on-target AE of abemaciclib because it inhibits renal efflux transporters in the proximal tubule of the kidney. The most frequent grade 3/4 AEs are neutropenia and diarrhea. Some clinical trials now integrate prophylactic loperamide, an antidiarrheal medication, with abemaciclib. Abemaciclib as a single agent is dosed continuously at 200 mg twice a day. In combination with endocrine therapy, abemaciclib is currently under investigation at 150 mg twice a day. Of note, abemaciclib is effective as monotherapy without the need for hormonal blockade,7 and this may be due to its increased affinity for CDK4, which is important for breast cancer oncogenesis, as compared with CDK6.

While palbociclib is a targeted therapy, we do not understand the characteristics of ER+ breast cancers that predict for clinical response. Palbociclib owes its development to decades of work on the cell cycle,9 which culminated in the 2001 Nobel Prize in Physiology or Medicine for Hartwell, Hunt, and Nurse.

Based on these seminal studies, one may predict that amplification of cyclin D1 (which binds to CDK4/6 and is required for its enzyme activity) or loss of p16 (which is a negative regulator of the CDK4/6-cyclin D1 complex) would enhance sensitivity to CDK4/6 inhibitors. PALOMA-1,3 which tested letrozole with and without palbociclib in patients with ER+ MBC, enrolled molecularly defined cohorts of patients with amplification of cyclin D1, loss of p16, or both. However, these tumor alterations did not predict for response to palbociclib, and ER positivity remains the only validated bio- marker of response. In addition, PALOMA-35 showed that neither PIK3CA mutational status (as detected by circulating tumor DNA) nor quantitative level of ER positivity predicted for response to palbociclib. Additional biomarker analyses from PALOMA-210 did not reveal any other cell-cycle–related genes that predicted for response to palbociclib plus letrozole.

Forty-five percent of patients on palbociclib do not derive an objective response and, among the patients who initially respond, 50% of them progress after 2 years of therapy.1 Currently, the only accepted mechanism of intrinsic resistance to CDK4/6 inhibitors in patients is Rb loss, which is rare (2.4%) in non-triple negative MBC.11  In vitro experiments have implicated cyclin E amplification,12 CDK6 amplification,13 and increased pyruvate dehydrogenase kinase 114 as mechanisms of acquired resistance to palbociclib monotherapy; how- ever, these associations with clinical resistance to CDK4/6 blockade have yet to be confirmed.

Biomarkers have also been explored in the neoadjuvant CDK4/6 inhibitor space. The NeoPalAna trial15 studied neoadjuvant anastrozole for 4 weeks, followed by the addition of palbociclib to anastrozole for four 28-day cycles, with single-agent anastrozole continuing until surgery. Biopsies were collected on starting palbociclib, after 2 weeks of palbociclib, and at surgery. There was a significantly increased rate of complete cell-cycle arrest (defined as Ki67 protein <2.7%) after 2 weeks of palbociclib plus anastrozole as compared with when starting palbociclib (87% vs 26%). How CDK4/6 inhibitors modulate Ki67 and whether or not decreased Ki67 translates into a decreased risk of recurrence and increased survival are open questions. Additional biomarker analysis showed that neither luminal breast cancer subtype nor PIK3CA mutational status predicted for response to palbociclib plus anastrozole. Palbociclib-resistant tumors had increased expression of cell-cycle genes CCND3, CCNE1, and CDKN2D on gene-expression analysis. Given that these genes are all downstream targets of the E2F1 transcription factor, it will be interesting to test to see if palbociclib resistance may be characterized by a cell-cycle gene signature.

Another research team17 has shown that decreases in tumor Ki67 parallel decreases in serum thymidine kinase in patients on neoadjuvant palbociclib plus anastrozole. This may provide preclinical data for a new serum biomarker for response to CDK4/6 inhibitors, at least in the neoadjuvant arena.

Sequencing of Therapies and Finding a Place for Ribociclib and Abemaciclib

Palbociclib and ribociclib are similar in that both require hormonal therapy for efficacy in ER+ MBC. However, abemaciclib also has single-agent activity, as shown in the phase II MONARCH-1 trial.7 MONARCH-1 enrolled a heavily pretreated patient population after prior progression on endocrine therapy and at least 1 prior chemotherapy agent for MBC, and showed about a 20% response rate and about a 40% clinical benefit rate, including patients with stable disease, with a median overall survival of about 22 months on abemaciclib monotherapy.22 Expanding on these data, and capitalizing on the penetration of abemaciclib into the central nervous system, the JPBO trial23 is investigating single-agent abemaciclib in patients with ER+ and ER+/human epidermal growth factor receptor–positive (HER2+) brain metastases.

CDK4/6 Inhibitors in Other Breast Cancer Subtypes and Settings, and With Chemotherapy and Immunotherapy

While CDK4/6 inhibitors were initially thought to have improved efficacy in TNBC, preclinical work did not support this hypothesis, although there were some TNBC cell lines that did have adequate IC50s for palbociclib. CDK4/6 inhibitors are the subject of multiple trials in the metastatic TNBC space including NCT0260548627 (palbociclib plus bicalutamide) in androgen-receptor–positive patients, SIGNATURE28 (ribociclib monotherapy), NCT0259936329 (ribociclib plus weekly paclitaxel) in Rb-wildtype patients of any subtype, JPBA30 (arm with abemaciclib monotherapy), and NCT0278479531 (abemaciclib plus Notch inhibitor LY3039478) in patients with Notch pathway alterations of any subtype.

Checkpoint blockade immunotherapy is a clear success in melanoma, non–small cell carcinoma, and other solid tumors; however, its role in breast cancer is not clear. An arm of KEYNOTE 01235 (pembrolizumab, a monoclonal antibody against PD-1) showed that of 32 patients with heavily pretreated PD-L1+ metastatic TNBC, there was a 19% response rate and a 26% clinical benefit rate. An arm of KEYNOTE 02836 (pembrolizumab) demonstrated a 12% response rate and 20% clinical benefit rate in heavily pretreated patients with ER+ HER2– PD-L1+ MBC. As in other solid tumors, PD-L1 positivity is predictive but not prognostic of response to checkpoint blockade. Low response rates in MBC have also been observed in the JAVELIN trial37 (avelumab, a monoclonal antibody against PD-L1).

The addition of palbociclib to the armamentarium of therapies in ER+ MBC is of great utility for patients; however, many fundamental questions remain about biomarkers for response and resistance, the role of next-generation CDK4/6 inhibitors, efficacy in other breast cancer subtypes, and combinations with other targeted therapies, chemotherapy, and immunotherapy. Multidisciplinary work integrating basic science, translational science, and clinical trials will be required to leverage fully the potential of CDK4/6 inhibitors in patients. 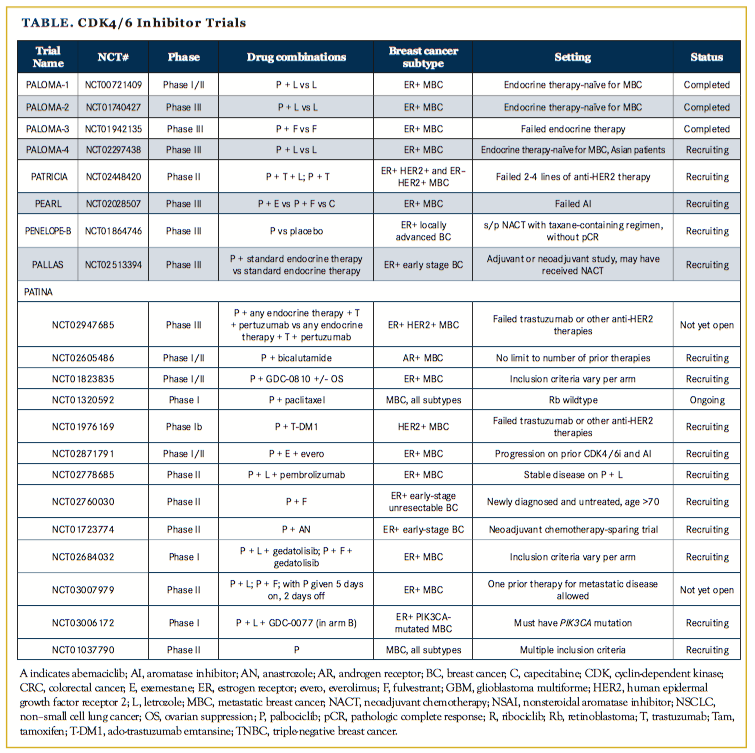 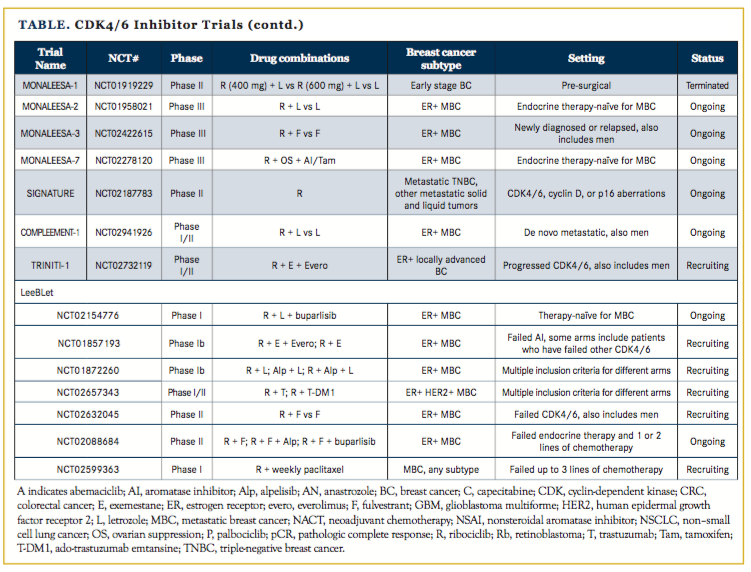 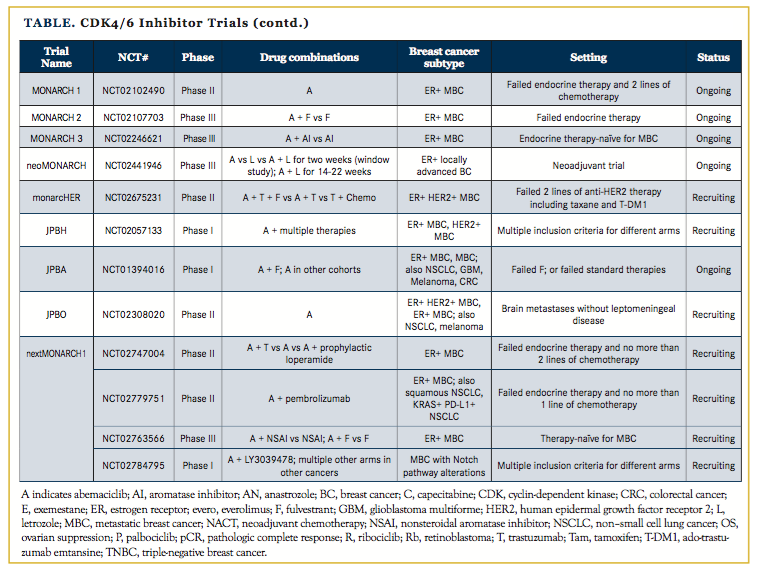