Positron emission tomography (PET) scans performed after definitive chemoradiation may help differentiate between viable tumor and nonmalignant tissue that has been affected by treatment. What follows is a case presentation and review of the literature. A 58-year-old man with stage IVa base-of-tongue cancer was treated with chemoradiation. Initial magnetic resonance imaging (MRI) 12 weeks post chemoradiation showed a worrisome enhancement, possibly indicating residual disease. A repeat MRI at 20 weeks showed no improvement. Howev- er, a PET scan at 25 weeks did not show any fluorodeox- yglucose (FDG) uptake, meaning gross residual disease was unlikely. He continued on surveillance and has suc- cessfully been spared from undergoing salvage surgery.

PET scans in patients with head and neck squamous cell carcinoma post chemoradiotherapy have shown high negative predictive values of 96%. This means that if the PET scan was negative, 96% of the time, this was truly negative, meaning no evidence of cancer. Some reports suggest that tumors positive for human papillomavirus may take more time to involute.

PET scans may have a role in identifying those who could be followed by surveillance without undergoing additional surgical post chemoradiation even with what may appear to look like potential residual findings on computed tomographies or MRIs.
AJHO. 2017;13(4):23-25

The treatment of residual disease after definitive chemoradiation in head and neck squamous cell carcinoma (HNSCC) often involves extensive salvage surgery. Residual disease, however, may be difficult to distinguish from posttreatment changes when computed tomography (CT) or magnetic resonance imaging (MRI) scans are used. The issue becomes even more challenging when suspicious findings on imaging persist, despite a negative biopsy. In such cases, the use of positron emission tomography (PET) scans post treatment may help differentiate between viable tumor and nonmalignant tissue that has been affected by treatment.

A 58-year-old man with stage IVa (T4a N0 M0) squamous cell carcinoma (SCC) of the right base of tongue, p16 positive, was treated with definitive chemoradiation utilizing cisplatin 100 mg/m2 every 3 weeks and a total of 70 Gy of radiation. His initial MRI findings 12 weeks post chemoradiation showed a bulky enhancement at the base of tongue, 1.2 cm × 1.9 cm × 1.2 cm in size (Figure1A), worrisome for possible residual disease. He had a direct laryngoscopy at 13 weeks with bilateral base of tongue biopsies which were negative for disease. A repeat MRI done at 20 weeks did not show improvement (Figure 1B). However, a PET scan at 25 weeks did not show any fluorodeoxyglucose (FDG) uptake (Figure 2), meaning it was likely he was disease-free. He was therefore continued on surveillance. He continues to do well without evidence of disease 17 months post chemoradiation and has successfully been spared from undergoing salvage surgery.

The PET-NECK trial is perhaps the most recognized study regarding the use of PET scans and HNSCC. The trial’s main focus was the management of neck disease in HNSCC in patients undergoing chemoradiation. In this trial, a total of 564 patients with HNSCC N2 or N3 disease were randomly assigned to undergo either a planned neck dissection (planned-surgery control group) or a PET scan (surveillance) 12 weeks after completion of chemoradiation. The authors concluded that the PET scan– guided watch-and-wait policy was noninferior to planned neck dissection when comparing overall survival (OS) and disease-specific survival. The researchers found that only 20% in the PET scan arm ultimately required neck dissection, which resulted in fewer complications related to neck dissection, similar quality of life, and more cost-effective manage- ment.2 In this study, the PET scan–guided surveillance approach was shown to be noninferior in terms of survival, and it resulted in fewer neck dissections.

What about the use of PET scans to detect residual disease in the primary tumor? In the PET-NECK trial described above, the surveillance group was the arm that underwent PET scans 12 weeks after completion of chemo- radiation; PET detected 28 of 276 patients (10%) with PET-positive disease at the primary site. However, the outcomes of these patients are not available in the manuscript nor in the supplemental material. In a retrospective review by Sjövall et al, a total of 82 patients with HNSCC, with a positive baseline PET-CT scan before start of treatment, were evaluated with a PET-CT scan 6 to 7 weeks after radiation therapy, and again with a clinical examination/endoscopy (with or without biopsy) 1 to 2 weeks later.

In a meta-analysis of 27 studies, most of which were retrospective studies involving 11 to 80 patients per trial, Isles et al described the role of PET scans in the follow-up of HNSCC following radiation or chemoradiation. The pooled mean positive and negative predictive values for the detection of residual disease at the primary site were 75% (95% confidence interval [CI], 68%-82%) and 95% (95% CI,
92%-97%), respectively.4

Residual disease may be difficult to distinguish from posttreatment changes when CT or MRI are used. In a prospective study from The University of Texas MD Anderson Cancer Center, which included 98 patients with stage III or IV disease, the positive and negative predictive values of PET-CT versus CT were compared 8 weeks post chemoradiation. In high-risk patients, PET-CT was superior to CT in detecting residual primary disease with a positive predictive value (PPV) of 100% versus 71.4%; for residual lymph node disease (as op- posed to residual primary disease), the PPVs were 75% versus 37.5% in the PET-CT and CT arms, respectively. High risk was defined as human papillomavirus (HPV)-negative tumors; nonoropharyngeal primaries such as laryngeal, oral cavity, and hypopharyngeal cancer; or history of significant tobacco use.5

HPV status may be the most important factor when considering imaging modalities and their timing. HPV status is highly prognostic of survival. The PET-NECK trial showed 2-year OS of approximately 90% and 55% for patients whose tumors were p16 positive and negative, respectively, regardless of whether they were in the PET scan surveillance or upfront neck dissection arm.2 Studies have also shown that HPV-positive tumors may take more time to involute.6 The research thus indicates that in HPV-positive patients, a more relaxed approach to intervention is appropriate, whereas in HPV-negative patients, aggressive interventions may be required.

Last but not least, cost considerations must also be taken into account. A prospective single-institution study from Australia indicated that the cost per patient was A$ (Australian dollars) 16,502 for planned neck dissection, A$8014 for CT, and A$2573 for PET surveillance. A policy in which PET was used only for incomplete response on CT was the least-cost strategy (A$2111).7 The cost analysis reported by the PET-NECK trial group noted that the per-person cost saving was £1492 (approximately $2,190 in US dollars), with an additional 0.08 quality-adjusted life-year per person.2

The presented case illustrates a typical example of a patient with HPV-positive, locally advanced HNSCC who underwent chemoradiation. Suspicious findings on the MRI 12 weeks post treatment were worrisome. The issue became even more challenging when the suspicious findings on imaging persisted 20 weeks post therapy despite a negative biopsy. As this patient demonstrated good compliance with follow-up appointments, and as his tumor was HPV-positive (which is known to take more time to involute), we had opted for further surveillance utilizing PET scans. The PET scan performed 25 weeks post therapy did not reveal any FDG uptake, and the patient has been successfully followed on surveillance since then, without being subjected to salvage surgery.

PET scans may have a role in identifying those who could be safely followed post definitive therapy even with residual findings on CTs or MRIs. Currently available compelling evidence on PET scans in HNSCC comes from studies focusing on neck disease. Further studies could focus on the utilization of PET scans in the management of primary HNSCC tumor sites post definitive chemoradiation.
Affiliations: Both Misako Nagasaka and Ammar Sukari are with the Department of Oncology, Karmanos Cancer Institute, Wayne State University, Detroit, Michigan.
Send correspondence to: Ammar Sukari, MD, Department of Oncology, Karmanos Cancer Institute, Wayne State University, 4100 John R St, Detroit, MI 48201. E-mail: sukaria@karmanos.org.
Disclosures: The authors have no actual or potential conflicts of interest to disclose. The authors did not receive any grants or other financial support for the preparation of this manuscript.
Acknowledgments: Both Misako Nagasaka and Ammar Sukari contributed to the planning, organization, data collection, and writing of the manuscript. The preliminary result of this study was accepted for an oral presentation at the International Conference on Oral, Mouth and Throat Cancer, Clinical and Diagnostics of Oral Cancer/Oral Cancer Treatment: Surgical and Non-Surgical Methods Session, Tuesday, August 16, 2016. Consent for treatment and publication was obtained from the patient himself. 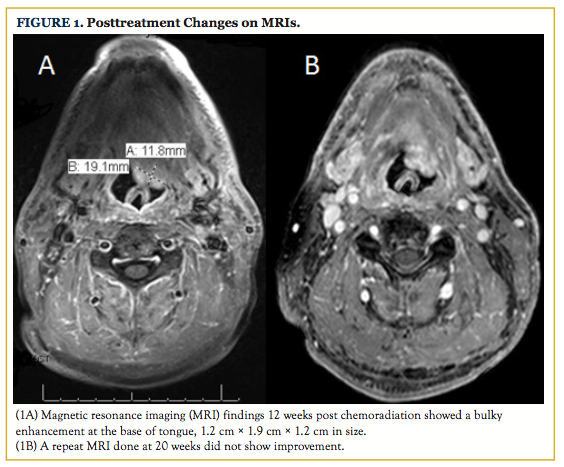 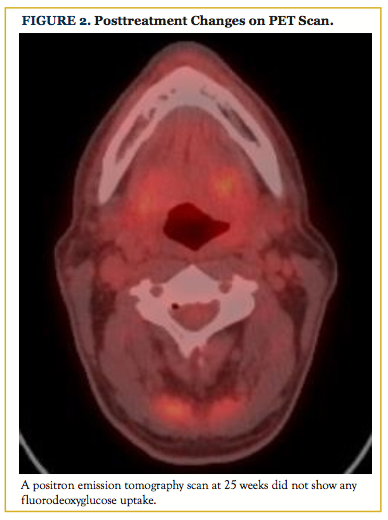