Aggressive systemic mastocytosis is a rare hematologic neoplastic disease that presents with a poor prognosis and low survival rate. It typically manifests with symp- toms associated with mast cell release of bioactive sub- stances, causing anaphylaxis, flushing, autonomic and hemodynamic instability, gastric distress, and headache. Moreover, more than 95% of cases are related to a mu- tation in codon 816 of the KIT gene, located on human chromosome 4q12 which codes for a type III receptor tyrosine kinase. We present a 78-year-old Hispanic man diagnosed with the aggressive subtype of systemic mastocytosis, who had an atypical manifestation and a KIT-negative variant. The diagnosis was confirmed based on pathologic and serologic findings which included mast cell infiltration of the spleen and bone marrow, malignant ascites, and an unusually elevated serum tryptase.

Systemic mastocytosis (SM) is one of the seven myeloprolifera- tive neoplasms (MPN) classified by the WHO 2008. The other six disorders are chronic myelogenous leukemia (CML), chronic neutrophilic leukemia (CNL), polycythemia vera (PV),  prima-
ry myelofibrosis (PM), essential thrombocythemia (ET), and chronic eosinophilic leukemia (CEL).1 SM is a rare, somatic disorder, characterized by an abnormal expansion and accumu- lation of neoplastic mast cells (MCs) in various organ systems.2 Depending on the extent of organ involvement, SM can be di- vided into cutaneous mastocytosis (CM), systemic mastocytosis (SM), and localized MC tumors. CM has skin-limited involve- ment and occurs most commonly in the pediatric population. Localized MC tumors consist of MC conglomerates that form either an MC sarcoma or an extracutaneous mastocytoma, depending on the involved tissues. SM is characterized by mast cell infiltration with more than one organ system, which may include spleen, GI tract, and bone  marrow.2
SM is further classified into five subtypes: indolent SM (ISM), smoldering SM (SSM), SM with an associated hema- tologic non-MC-lineage disease (SM-AHNMD), aggressive
SM (ASM), and mast cell leukemia (MCL). These last three sub- types have poor prognosis. Symptoms of SM are caused by mass effect by the neoplastic mast cells, and the release of bioactive substances acting at both local and distal sites. One of these substances is tryptase, which may cause anaphylaxis, flushing, palpitations, vascular collapse, gastric distress, lower abdominal cramping pain, and recurrent headache.3 Other features of aggressive SM may include pancytopenia, lymphadenopathy, hy- poalbuminemia, malabsorption, or large osteolyses (possibly as   a result of mast cell–mediated fibrotic changes in these organs)  as well as hepatosplenomegaly and ascites due to periportal fibrosis associated with mast cell infiltration of liver parenchy- ma. The advanced variants of SM have poor prognosis, with an overall survival of less than 12  months.2

A bone marrow biopsy revealed 80% cellularity with dys- megakaryopoiesis and slight monocytosis, suggestive of MDS. Cytogenetic results were normal. Because the patient had mild anemia and no symptoms with a low-risk score, he continued  to be observed with no requirement of transfusions or active treatment. In 2013, the patient had a follow-up colonoscopy with diverticuli and a sessile benign rectal polyp. However,  in a follow-up examination in July 2015, the patient de- veloped early satiety and exhibited a 13-pound weight loss 3 months prior to evaluation. On physical exam- ination, he had epigastric pain upon palpation. It was recommended that he undergo an upper endoscopy. The endoscopy revealed mucosal erythema in the gas- tric area and a clean base ulcer; biopsy showed active chronic gastritis and the presence of Helicobacter pylori requiring treatment with amoxicillin and clarithromy- cin for 2 weeks.

Follow-up laboratory tests revealed WBC 4.1 (29 segmental neutrophils, 38 lymphocytes, 23  monocytes, 8 eosinophils); Hgb of 9.3, hematocrit (Htc) of 30.1, and a platelet count of 75,000. Blood chemistry was significant for alkaline phosphatase in 315 U/L (nor- mal results range 30-115 U/L), but BUN, creatinine, and electrolytes were within normal ranges. Urinal- ysis, hepatitis B and C panel, thyroid function tests, and the HIV test were  non-contributory.

The patient was started on oral imatinib 400 mg, as in- dicated for the treatment of adult patients with aggressive systemic mastocytosis without the D816V c-KIT mutation or with unknown c-KIT mutational status.4 Alternatives, such  as interferon or 2-CDA were discussed, but the patient   was initially considered too fragile to tolerate those alternatives. Patient evolved with progressive tension ascites and worsening anemia (6.3 gm/dl) requiring PRBC transfusions. The patient had poor tolerance to imatinib, even at a lower dose of 100 mg due to worsening diarrhea and tension ascites, requiring an intraperitoneal catheter for chronic drainage.

During the following months, the patient was hospitalized   on multiple occasions due to massive ascites and symptomatic anemia. Low-dose prednisone at 5 mg improved the platelet count to over 150 x 103/microL. Due to poor clinical response to imatinib, the patient had a trial of low-dose interferon alpha (1 million units) delivered subcutaneously, three times a week. His aggressive mastocytosis progressed. The patient died in  June 2016 in hospice care.

Uncommitted and MC-committed progenitors express KIT,  a type III receptor tyrosine kinase encoded by a 21-exon containing gene located on human chromosome 4q12.4   The
ligand of the KIT receptor, stem cell factor (SCF), initiates the development of MCs from their uncommitted and MC-com- mitted precursor cells as well as the proliferation, maturation, survival, and proinflammatory mediator release from MCs.5,6  In mastocytosis, more than 95% of cases undergo SCF-in- dependent differentiation and accumulation of MCs  due
to a KIT receptor tyrosine kinase gain-of-function mutation (D816V). This is characterized primarily as an aspartic acid to valine substitution, which results in uncontrolled proliferation, enhanced survival and cell autonomous growth of MCs.2 This mutation is often detectable independent of the category of  SM, including most aggressive subtypes of SM. Our patient, however, tested negative for this mutation, further emphasizing the uniqueness of this case. Additional somatic mutations are found in patients with SM-AHNMD, ASM, and MCL. These include mutations in TET2, SRSF2, ASXL1, CBL, RUNX1, and RAS.7-9

This patient complies with the major criteria, as multifocal dense infiltrates of mast cells were identified both in bone marrow and spleen. He also complies with the minor criteria  of a total serum tryptase > 20 ng/mL. Since other flushing disor- ders were excluded, including carcinoid tumor and pheochro- mocytoma, this patient was diagnosed with  SM.

The aim of initial management is to reduce the burden    of systemic mediators of inflammation. H1 antihistamine  is usually prescribed for flushing and pruritus in ASM patients. This patient, however, did not exhibit such symptoms. Instead, H2 antihistamine or proton pump inhibitor for gastric acid hypersecretion and oral cromolyn sodium for diarrhea and abdominal pain was prescribed, as well as, aspirin for   severe flushing to block biosynthesis of PGD2. Systemic glucocorti- coids appeared to alleviate the malabsorption. The patient had improvement in diarrhea with cromolyn sodium.

In terms of management of ASM itself, interferon alpha (as long-term subcutaneous therapy) or cladribine  (2CdA, 3-6 cycles) are first-line therapy for patients who can tolerate    it. If ASM is rapidly progressing, more intensive therapy is required. Polychemotherapy with fludarabine or 2CdA, often  in combination with cytosine arabinoside is also an option for these patients. In older patients and those who cannot  tolerate intensive therapy, conventional cytoreductive agents (ie, 2CdA) or palliative drugs (ie, hydroxyurea [HU]) may be  prescribed.
In cases in which intensive therapy cannot be offered, pallia- tive therapy with HU is an option.2 A recent open-label study demonstrated efficacy of midostaurin, an oral small mole-   cule agent, which inhibits multiple kinases in patients with advanced systemic mastocytosis, with a response rate of 60%.10 It is an emerging therapeutic option that inhibits non-mutant and mutant KIT D816V.

Despite treatment with two lines of therapy, imatinib and interferon, the patient continued with progressive ascites and worsening functional status.

Mastocytosis is a rare hematologic disease that requires clinical suspicion and pathologic expertise. In this case report, treat- ment of advanced SM is a challenge, and most patients relapse or have resistant disease. There is hope that novel agents, especially tyrosine kinase inhibitors that can target the KIT mutations can alter the dim prognosis of these patients.10 For patients that have drug resistance and are young and fit, stem cell transplant is an alternative treatment option.11 Treatment  for SM has to be adjusted to the individual patient and the SM category. In indolent disease, the main aim is to control medi- ator secretion and in aggressive disease, the aim is to suppress malignant clone expansion. 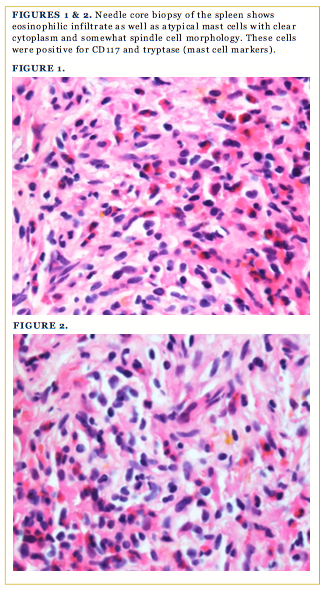