Metaplastic squamous cell carcinoma (SCC) of the breast is a very rare form of breast malignancy accounting for less than 0.1% of all breast carcinomas. We report a case of primary SCC of the breast in a 67-year-old Asian woman. Our purpose for this review is to enable a better understanding of the disease and to find an optimal approach to therapy.

Metaplastic carcinoma accounts for 0.25% to 1% of annual breast malignancies diagnoses. Primary metaplastic squamous cell carcinoma (SCC) of the breast is a very rare breast malignancy, accounting for less than 0.1% of all breast carcinomas.1 SCC was first reported in 1908, and diagnosis is established when more than 90% of the malignant cells are of squamous cell origin.2 Squamous cell carcinoma is considered to be more aggressive compared with other infiltrating ductal cancers, and knowledge regarding treatment patterns and outcomes has been limited.2-4 To confirm a diagnosis of primary SCC of the breast, the following conditions must be fulfilled: (1) absence of an associated primary SCC in a second site, (2) absence of skin involvement, and (3) there must be a clear predominance (>90%) of areas with SCC at histologic examination.2 Clinical and radiographic characteristics are not specific, and tumors are usually estrogen receptor (ER)–, progesterone receptor (PR)–, and human epidermal growth factor receptor 2 (HER2)-negative.2,5 As management options are still limited, the prognosis and optimal treatments remain controversial. In this report, we will present a case of this rare breast malignancy.

A 67-year-old previously healthy Asian woman was referred to our clinic for a newly diagnosed right breast cancer. The patient stated that prior to the screening mammogram, she had no pain, swelling, or nipple discharge. She also never had breast abnormality on mammogram; therefore, she never had a biopsy of any kind. She denied any family history of breast cancer, colon cancer, or ovarian cancer. The patient has no history of skin cancer, nor did she have any skin, oral pharynx, or anal lesions. Per the patient, her very first mammogram was done in 2011, which showed normal results. The most recent screening mammogram was done on October 2, 2015, which found asymmetrical breast parenchyma within the upper-outer anterior right breast, without prior studies for comparison. Her assessment after this screening was BI-RADS 0. A diagnostic mammogram was ordered, and the findings showed a suspicious mass measuring 1.9 x 0.9 x 1.4 cm with associated calcifications in the right breast at the 11:00 position, 3 cm from the nipple with an assessment of B-RADS 4 (Figures 1A and 1B).

The patient then underwent an ultrasound-guided vacuum-assisted core needle biopsy. Pathology results from the biopsy showed metaplastic SCC that was ER-positive, PR-negative, and HER2/neu-negative. The patient was then referred to our clinic for surgical evaluation. Physical examination revealed a benign bilateral exam with no palpable masses.

Right simple mastectomy with sentinel lymph node biopsy and 2 19F Jackson-Pratt drain placements were performed. Gross examination revealed a 2.4-x-2.0-x-1.3–cm firm, pink-tan, lobulated mass within the central, slightly lateral aspect of the right breast specimen. The specimen was confirmed to be a single-focus, invasive SCC (metaplastic carcinoma), with a total Nottingham score of 9/9. Areas of local invasion and necrosis can be observed microscopically in Figures 2A and 2B. Microscopic examination of the mass demonstrated SCC with keratinization (Figure 2). The margins and regional lymph nodes were negative. Ductal carcinoma in situ and lymph-vascular invasion were not identified. Additional findings were florid usual duct epithelial hyperplasia, biopsy site change, and skin with seborrheic keratosis and scar. There was no involvement of the skin, nipple, or skeletal muscle. Two sentinel nodes were biopsied and were negative for carcinoma. Pathology staging of the specimen was pT2pN0.

At the 1-week, postoperative follow-up visit, the patient appeared to be alert and not in distress. She and the oncologist discussed that adjuvant chemotherapy treatment would be beneficial given the nature and rarity of the diagnosis. The patient has completed 4 cycles of docetaxel plus cyclophosphamide, with a baseline computed tomography scan and bone scan at the time this study was written. At the 1-year follow-up visit, the patient reported that she was doing well and was currently taking letrozole, and reports little to no side effects. The 1-year follow-up screening mammogram shows scattered areas of fibroglandular density with no suspicious malignancy findings present.

Breast cancer remains the most commonly diagnosed cancer among women, with approximately 182,000 diagnosed annually in the United States alone. Metaplastic breast carcinoma is an adenocarcinoma characterized by a histologic combination of mesenchymal and epithelial cell origin. It accounts for less than 1% of all breast cancers and is considered to be relatively rare compared with invasive ductal carcinoma.6.7 Many theories are involved in the histogenesis of SCC of the breast; however, it still remains unclear. The mean age at presentation of SCC of the breast is 54 years. The 5-year disease-free rate can be estimated around 40%, with an overall survival rate for metaplastic breast cancer to be in the range of 49% to 68%.7

Breast SCC tends to be a relatively large, rapidly growing mass that can become palpable within 2 to 3 weeks (range, 2-5 cm; median, 4 cm).2,8,9 However, in this case, the mass was never palpable on self-exam or upon physical examination. There also are no unique radiographic imaging features found for metaplastic SCC of the breast. A metaplastic carcinoma mass typically is either circumscribed or presents as an indistinct, very dense mass— with infrequent calcifications.3,10,11

More than 90% of metaplastic SCC of the breast is considered triple-negative (TNBC), which is generally expected as most SCC of the breast has the basal-like molecular subtype.2.9.12 The main characteristics of TNBC have shown similarities to basal-like cancers, including an increased frequency in younger patients (age <50 years) and a greater prevalence among African-American women, with the majority presenting as interval cancers and being significantly more aggressive than tumors of other molecular subtypes.13 However, basal-like and TNBC are not synonymous.

The management of metaplastic breast cancer has largely paralleled that of invasive ductal carcinoma management, despite growing research and clinical support that metaplastic breast cancers lie more along the spectrum of basal-like breast cancers. Patients with metaplastic TNBC receiving identical chemotherapy regimens as patients with invasive ductal carcinoma showed a poor 3-year disease-free survival rate.7,14,15 In this case, the patient was PR and HER2/neu-negative but ER-positive, which has been associated with improved relapse-free survival.2 This improvement in survival may derive from the increased range of treatment options, namely ER-targeted therapy.

In conclusion, the rarity of primary metaplastic SCC of the breast and the aggressiveness of this disease have led to poor outcomes in response to chemotherapeutic regimens. Therefore, as standard chemotherapy and hormonal therapy approaches have not proven to be optimal in the treatment of metaplastic breast cancer, further laboratory research is needed. Clinical studies further comparing outcomes and treatment possibilities with invasive ductal carcinoma may not be feasible due to the rarity of the disease.

Patient Consent: Written informed consent was obtained from the patient for publication of this case report and accompanying images.

Acknowledgments: The authors would like to thank Daniel M. Garland, MD, and Cynthia Sile, MD, for their assistance and expertise. The authors also thank RC, on whom the case report is based. 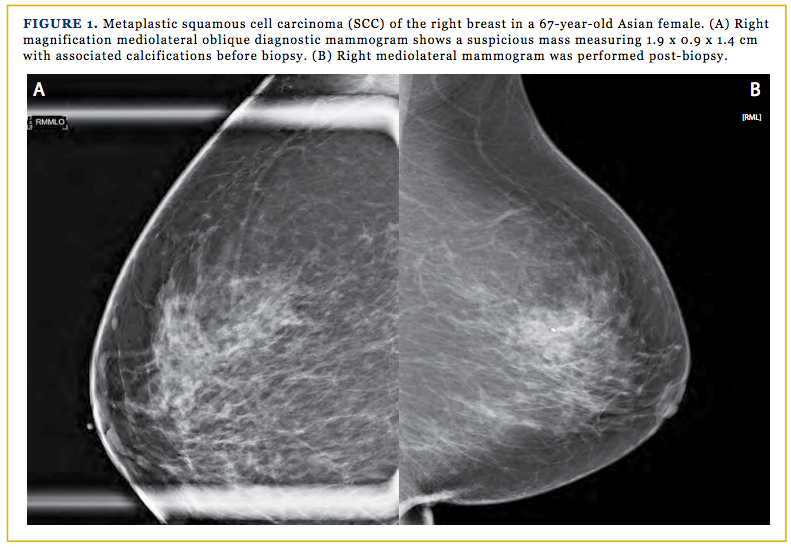 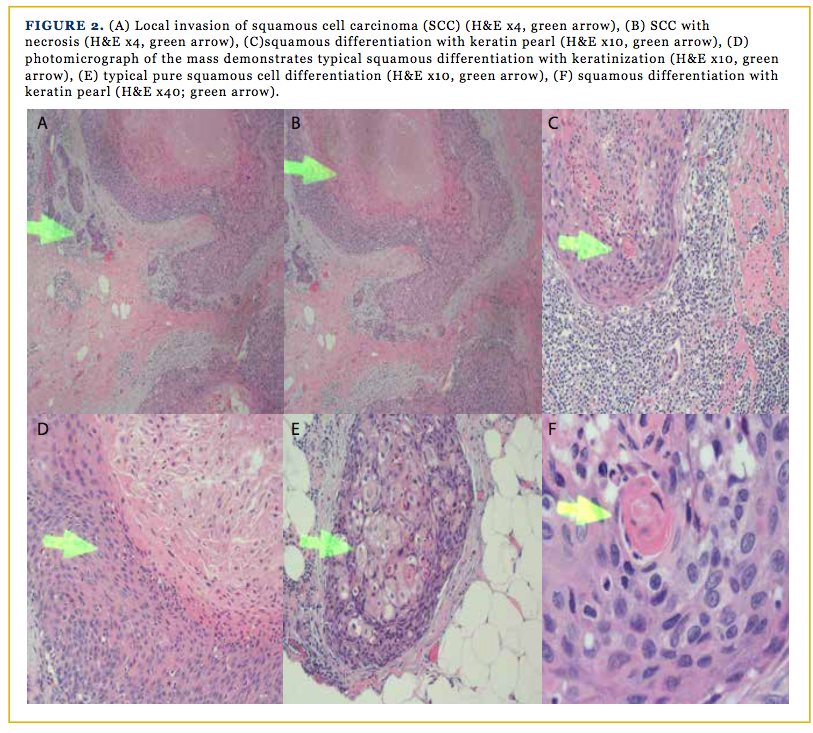