Among men in the United States, prostate cancer is the most common malignancy and the second leading cause of mortality behind lung cancer.1 Since the discovery of the androgen dependence of prostate cancer in 1941 by Huggins and colleagues,2 androgen deprivation therapy (ADT) has remained the mainstay of treatment for prostate cancer.3 A better understanding of the androgen receptor (AR) signaling pathway and mechanisms of resistance to castration over the past decade has led to the discovery of novel AR targeting agents such as abiraterone and enzalutamide. This article is a focused review on novel targeted therapies in castration-resistant prostate cancer (CRPC) and biomarkers of resistance to such therapies.

In a normal prostate, androgen receptors play a major role in the development of the prostate and regulating of the genes encoding protein transcription for normal prostate function. In prostate cancer, increased levels of androgens in the tumor cells promote AR signaling.4 This in turn modulates gene expression associated with cell-cycle regulation, growth, and survival, and promotes the expression of oncogenic fusion genes. Tradition Traditionally, treatments have attempted to decrease the amount of circulating androgens and AR signaling through the activation of the AR. This was achieved by surgical and chemical castration.3,4

However, patients frequently develop resistance to castration, and several different mechanisms have been attributed to the development of such resistance. Studies over the past few years have shown that in CRPC the levels of intratumoral and adrenal androgens, namely testosterone and dihydrotestosterone, are similar to those in the noncastrated prostate, and therefore, there is still a role for secondary hormonal manipulation.4-6 In addition to these residual androgens, we also know that overexpression or gene amplification of AR, point mutations in the AR ligand-binding domain (LBD), and expression of active AR splicing variants lead to maintained AR signaling in CRPC, causing first-generation anti-androgens to become partial AR agonists.4,6

The two main classes of anti-androgen therapies include androgen biosynthesis inhibitors and androgen receptor blockers (Figure 1). The drugs reviewed in this article in each of these classes are abiraterone and enzalutamide. 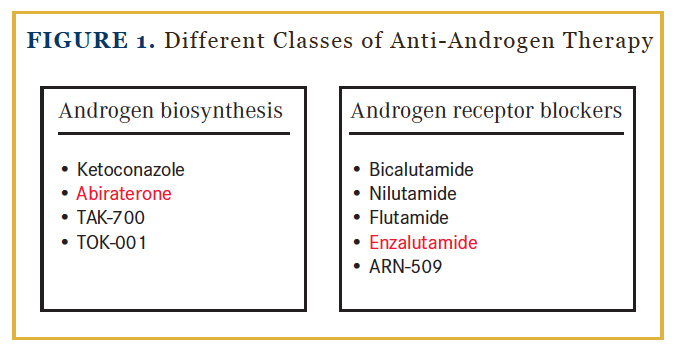 A microsomal enzyme called CYP17 is essential for the biosynthesis of androgens and adrenal hormones. It acts by catalyzing 2 crucial steroid reactions: (1) hydroxylation of pregnenolone and progesterone at the C17 position to generate 17α-hydroxypregnenolone and 17α-hydroxyprogesterone, respectively; and (2) cleavage of the C17–C20 bond of 17α-hydroxypregnenolone and 17α- hydroxyprogesterone to form dehydroepiandrosterone (DHEA) and androstenedione, respectively.4-6 Inhibition of CYP17 thus causes decreased androgen synthesis, offering a therapeutic target in prostate cancer. Antifungal and nonspecific CYP17 inhibitors such as ketoconazole and novel, highly specific CYP17 inhibitors such as abiraterone, TAK-700, and TOK-001 fall under this category.4-6

Abiraterone: This is a highly selective CYP17 inhibitor that causes a decrease in adrenal androgens, thus indirectly inhibiting the AR signaling pathway. Two large clinical trials, COU-AA-301 and COU-AA-302, resulted in approval of abiraterone (Zytiga) in the management of CRPC in the postdocetaxel and chemotherapy-naïve setting, respectively.7,8

COU-AA-301 was a randomized phase 3 trial that enrolled a total of 1195 patients with metastatic CRPC who were previously treated with docetaxel.7 Patients were randomized in a 2:1 ratio to abiraterone acetate 1000 mg with prednisone 5 mg twice daily and placebo with prednisone arms, respectively, with a primary endpoint of overall survival (OS) and secondary endpoints of time to prostate-specific antigen (PSA) progression, progression-free survival (PFS), and PSA response rate. The study demonstrated prolonged OS in the abiraterone acetate-plus-prednisone group compared with the placebo-plus-prednisone group (14.8 months vs 10.9 months; hazard ratio [HR] = 0.65; 95% confidence interval [CI], 0.54-0.77; P <.001). The secondary endpoints of time to PSA progression (10.2 vs 6.6 months; P <.001), PFS (5.6 months vs 3.6 months; P <.001), and PSA response rate (29% vs 6%; P <.001) favored the treatment group as well. The drug was reasonably well tolerated, with common adverse events (AEs) including fatigue, anemia, nausea, pain, arthralgia, edema, and constipation. This study led to approval of abiraterone in treatment in the postdocetaxel setting of CRPC. 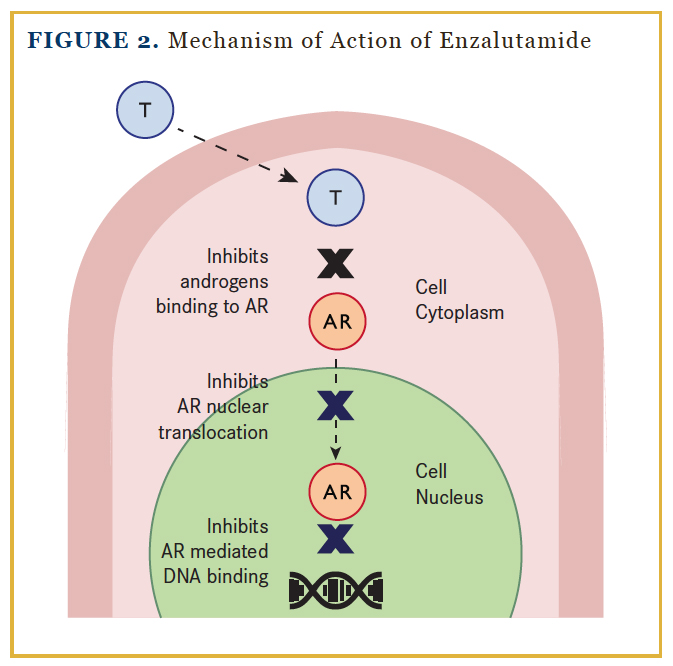 Enzalutamide: Enzalutamide is a direct AR blocker that binds with a high affinity to the ligand-binding domain of the AR (Figure 2). It prevents nuclear translocation of the AR, DNA binding, and co-activator recruitment of the ligand-receptor complex. Two clinical trials, AFFIRM9 and PREVAIL,10 were noteworthy in approval of enzalutamide as a treatment option in metastatic CRPC.

The AFFIRM trial was a phase 3 randomized, double-blind, placebo-controlled trial that evaluated whether enzalutamide prolonged survival in patients with CRPC in the postchemotherapy setting.9 A total of 1199 men with CRPC after chemotherapy were randomly assigned in a 2:1 ratio to receive either oral enzalutamide 160 mg per day or placebo. The primary endpoint was OS, and the key secondary endpoints included reduction in PSA level by 50% or more, soft-tissue response rate, quality-of-life response rate, time to PSA progression, time to skeletal-related events (SREs), and radiographic PFS. The study demonstrated significantly prolonged survival with enzalutamide in the CRPC setting after docetaxel when compared with placebo (18.4 months vs 13.6 months; HR for death in the enzalutamide group, 0.63; 95% CI, 0.53-0.75; P <.001). In addition, it demonstrated the superiority of enzalutamide over placebo with respect to all secondary endpoints. AEs of fatigue, diarrhea, and hot flashes were higher in the enzalutamide group, and seizures were reported in 5 patients (0.6%) receiving enzalutamide.

The PREVAIL study, a phase 3 double-blind study, assigned a total of 1717 patients with chemotherapy-naïve CRPC after failing standard ADT to receive either enzalutamide or placebo once daily in a 1:1 ratio.10 The co-primary endpoints were radiographic PFS and OS; some of the key secondary endpoints included the time to initiation of cytotoxic chemotherapy, time to first SRE, soft-tissue response, time to PSA progression, and PSA response. The study was stopped after a planned interim analysis conducted when 540 deaths had been reported. The enzalutamide group demonstrated a significantly delayed radiographic disease progression (81% risk reduction; HR = 0.19; 95% CI, 0.15-0.23; P <.001) and improved OS (72 % vs 63%, with a 29% reduction in the risk of death; HR = 0.71; 95% CI, 0.60-0.84; P <.001). In addition, superiority of enzalutamide over placebo was shown with respect to all secondary endpoints. The drug was generally well tolerated, with common side effects being fatigue and hypertension. This study demonstrated that enzalutamide added to ADT at progression provided meaningful clinical benefit to men with chemotherapy-naïve metastatic prostate cancer.

Although secondary hormonal manipulation by these novel anti-androgen agents works in CRPC, patients tend to develop resistance. Over the years, several mechanisms of development of resistance have been proposed and tested in preclinical models as well as patient samples.

Sawyers and his group raised the possibility that in preclinical prostate cancer models, enzalutamide resistance may be mediated by glucocorticoid receptors (GRs).11 In animal models, the investigators were able to show that the GR is upregulated in prostate cancer cell lines and that dexamethasone reverses enzalutamide induced growth inhibition. They also reported a correlation between GR expression in patient-derived prostate cancer specimens and clinical response to enzalutamide. However, the current clinical evidence for GR mediating drug resistance in patients with CRPC is very limited at best.

Sharifi and his group have proposed that resistance to abiraterone may develop because of continued intratumoral steroidogenesis by a backdoor pathway despite strong CYP17A1 inhibition.12 They were able to show that in addition to CYP17A1 inhibition, abiraterone can competitively inhibit 3β-hydroxysteroid dehydrogenase (3β-HSD), which has been reported to convert DHEA to ASD, which is then 5α-reduced by 5α-reductase 1 to 5α-dione, and then DHT in cell lines and LAPC4 xenografts in rodent models. As a result, it was proposed that the second, weaker action of blocking 3β-HSD enzymatic activity may perhaps be overcome by increasing abiraterone drug exposure by administration with a high-fat meal, increasing dosage of the drug, or both. 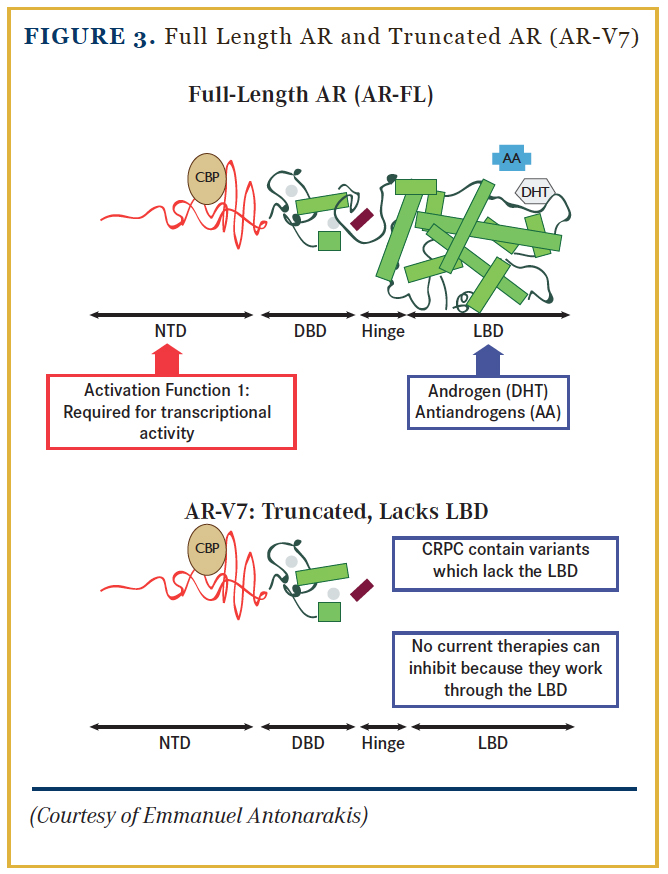 AR-V7: Androgen receptor variant 7 (AR-V7) is an AR isoform encoded by splice variant 7. This spliced variant encodes a truncated AR protein that lacks the C-terminal LBD, but remains constitutively active as a transcription factor and is capable of promoting activation of target genes (Figure 3).13,14 The expression of AR-V7 is increased by nearly 20-fold in CRPC tumor cells in certain patients. Because enzalutamide primarily interacts with the LBD of AR, it is expected that AR-V7 without LBD causes enzalutamide resistance. Furthermore, since abiraterone causes ligand depletion, it is expected that abiraterone will not work in the presence of ligand-independent AR-V7 protein.13,14

The pearls from this study are that the detection of AR-V7 may be associated with primary and acquired resistance to enzalutamide and abiraterone; patients with CRPC who have detectable AR-V7 in CTC samples can be steered away from receiving AR-targeting drugs and offered alternative treatments instead.

Several ongoing clinical trials are looking at the combination and sequencing of enzalutamide and abiraterone in both CRPC and hormone-naïve prostate cancer, some of which are listed in the Table.

Most recently, in a press release, the results of the phase 2 TERRAIN trial15 performing a head-to-head comparison between enzalutamide and bicalutamide in metastatic prostate cancer were announced (NCT01288911). This trial enrolled 375 patients in North America and Europe who had metastatic prostate cancer that had progressed despite luteinizing hormone-releasing hormone (LHRH) analogue therapy or surgical castration, and demonstrated a statistically significant increase in PFS in the enzalutamide group compared with bicalutamide (15.7 months vs 5.8 months; HR = 0.44; 95% CI, 0.34-0.57; P <.0001).

Targeting AR remains a viable strategy even after development of castration resistance.4 Androgen biosynthesis inhibition through abiraterone and direct AR blockade with second-generation anti-androgens such as enzalutamide have demonstrated a survival advantage in the CRPC setting, in both postdocetaxel as well as chemotherapy-naïve patients.7-10 Use of biomarkers of therapeutic resistance such as AR-V7 will help us identify which patients will not benefit from these targeted agents (ie, enzalutamide and abiraterone), thereby allowing us to offer alternative treatments to these patients.13,14 Given the lack of C-terminal LBD in this common AR variant, AR-V7 detection could also lead to development of novel N-terminal LBD targeted AR-blocking agents.

Interestingly, AR expression has been shown to be important in preventing the differentiation of epithelial prostate cancer cells into a neuroendocrine phenotype associated with tumor progression. The unopposed continuous use of secondary hormonal manipulation by various anti-androgen therapies has been felt to be responsible for the emergence of this aggressive phenotype.16,17 For these reasons, it needs to be established whether the earlier use of secondary hormonal manipulation in the CRPC setting indeed could lead to poorer outcomes. 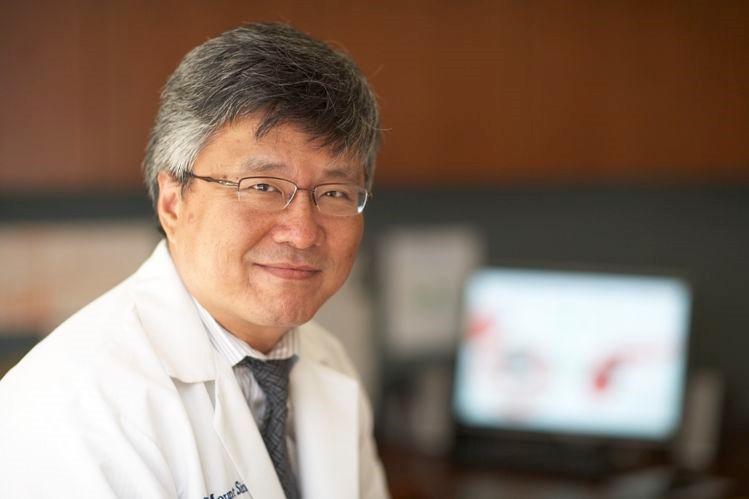 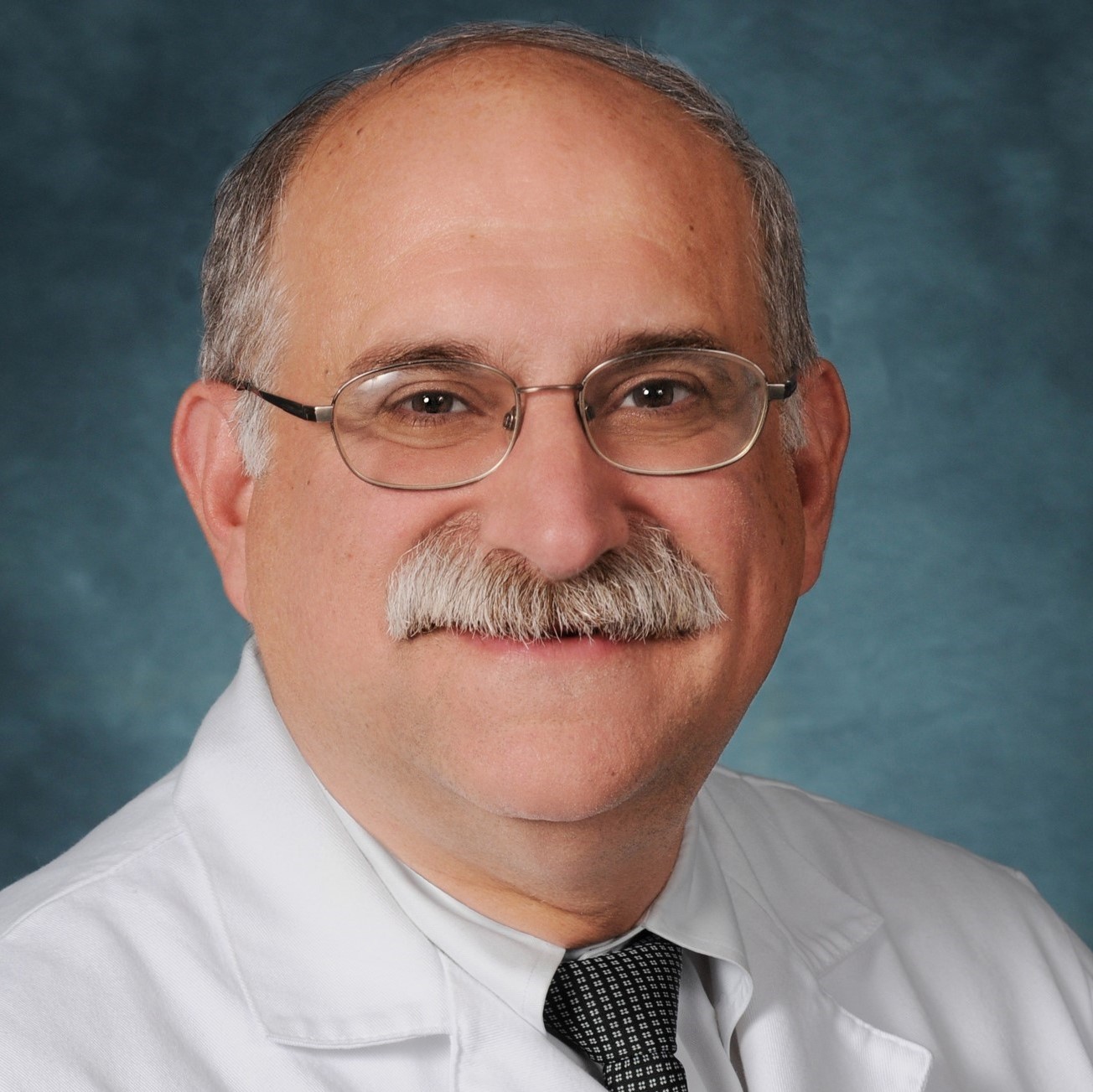