In 2015, newly diagnosed chronic lymphocytic leukemia (CLL) is estimated to reach 14,620 cases, with 4650 deaths in the United States. First-line options typically include chemoimmunotherapy; however, in patients who relapse or are refractory, oral agents offer a new and safe alternative. Idelalisib is the first agent to target the phosphatidylinositol-3-kinase (PI3K) pathway, and the second oral agent approved by the US Food and Drug Administration (FDA), in July 2014, for the treatment of relapsed/refractory CLL. In addition, idelalisib was granted accelerated approval for treatment of relapsed follicular B-cell non-Hodgkin lymphoma (FL) and relapsed small lymphocytic lymphoma (SLL). In a phase III study of idelalisib in combination with rituximab in 220 patients with relapsed CLL, the overall response rate (ORR) was 81%, with a statistically significant overall survival (OS) of 92% versus 80% at 12 months (P = .02). In a phase II study in patients with indolent non-Hodgkin lymphoma, the median duration of response was 12.5 months, median overall survival was 20.3 months, and 1-year survival was 80%. The most common adverse events (≥10%) reported in clinical trials included fever, chills, nausea, cough, infusion reaction, and gastrointestinal symptoms. The FDA-approved labeling of idelalisib includes black box warnings for fatal and/or serious diarrhea or colitis, gastrointestinal perforation, pneumonitis, and hepatotoxicity.

The most current guideline published by the National Comprehensive Cancer Network (NCCN) recommends chemoimmunotherapy for patients younger than age 70 years, and who do not have significant comorbidities. The combination of chemoimmunotherapy for these patients includes fludarabine, cyclophosphamide, and rituximab as the first-line option. In relapsed/refractory patients, the next line of treatment is dependent on length of response to initial treatments. For patients able to maintain a long response, retreatment with first-line therapy is recommended until short response. In those with short responses to chemoimmunotherapy, the NCCN recommends use of oral agents. One potential option is the use of idelalisib in combination with rituximab.3

In July 2014, idelalisib was approved by the US Food and Drug Administration (FDA) for the treatment of relapsed CLL in combination with rituximab after failure of 2 prior therapies. In addition, it was granted accelerated approval for treatment of relapsed follicular B-cell non-Hodgkin lymphoma (FL) and relapsed small lymphocytic lymphoma (SLL). The FDA-approved dose and schedule for idelalisib is 150 mg orally twice daily for patients with FL/SLL and in combination with rituximab for patients with CLL.4

An initial phase I, dose-ranging trial evaluated 54 patients with relapsed/refractory CLL treated with idelalisib (GS-1101, CAL-101) at dosages of 50 mg to 350 mg once daily or twice daily. Treatment with idelalisib demonstrated an overall response rate (ORR) of 72%, with 39% of patients with partial responses (PRs; International Workshop on Chronic Lymphocytic Leukemia 2008 criteria5) and 33% with PRs in the presence of treatment-induced lymphocytosis.6 For those patients who responded, the median time to response was 1 month, with a median duration of response of 16.2 months. The median progression-free survival (PFS) for all patients was 15.8 months.7 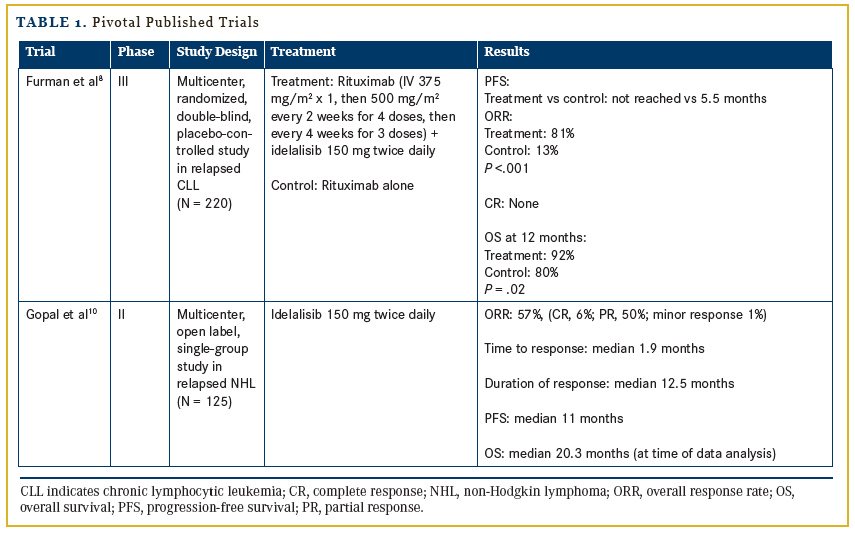 A phase I study of idelalisib evaluated 64 patients with relapsed indolent non-Hodgkin lymphoma (NHL) at dosages ranging from 50 mg to 350 mg once daily or twice daily.9 Treatment with idelalisib resulted in an ORR of 47%, with 1 patient achieving complete response (CR). The median time to response for the 30 patients was 1.3 months, with a median duration of response of 18.4 months. The median PFS was 7.6 months in all patients.

In a phase II, multicenter, open-label study of 125 patients with relapsed indolent NHL treated with idelalisib 150 mg twice daily, the reported response rate was 57%, including 6% CRs (Table 1).10 In addition, the median time to response was 1.9 months, with a median duration of response of 12.5 months. At 48 weeks, 47% of patients remained progression-free, with a median PFS of 11 months. Median OS was 20.3 months, and OS at 1 year was estimated at 80%.


Side Effects and Management of Toxicities 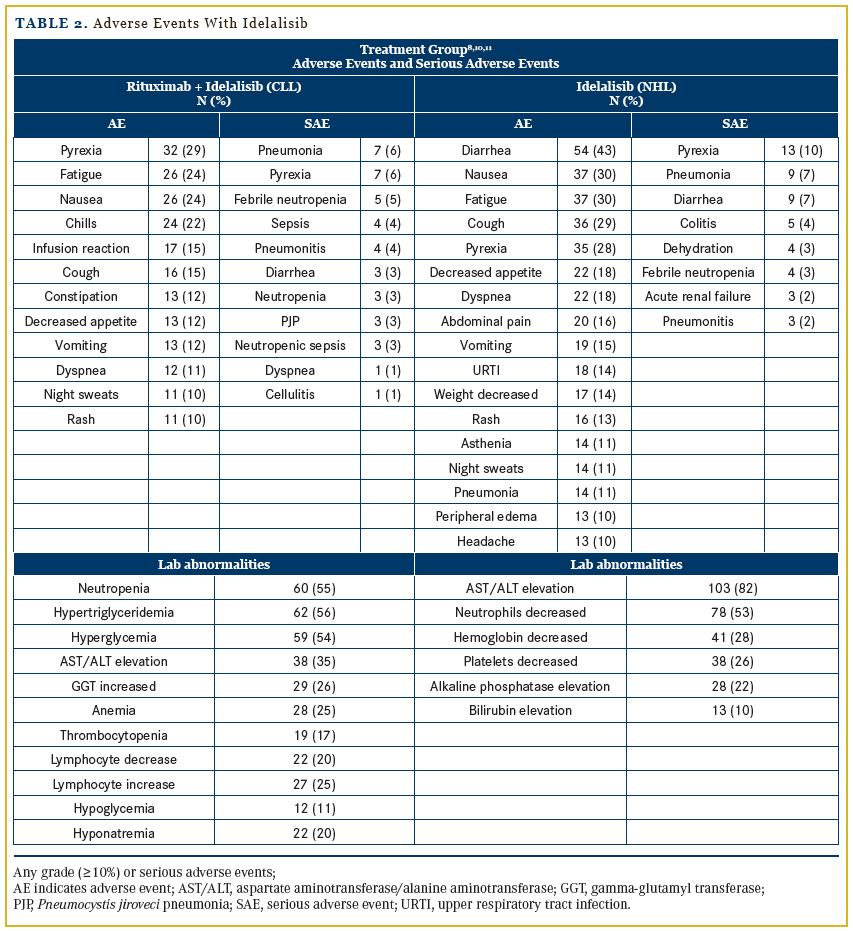 Black box warnings on the idelalisib approved label include fatal and/or serious diarrhea or colitis, GI perforation, pneumonitis, and hepatotoxicity. Severe diarrhea or colitis (grade ≥3) have been reported in clinical trials, with median onset of 1.9 months for any grade, 1.5 months for grade 1/2, and 7.1 months for grade 3/4. During clinical trials, 2 types of diarrhea were observed. The first was a self-limiting type that occurs within 8 weeks of idelalisib initiation, which was typically mild or moderate and responsive to common antidiarrheal medication.

The second type of diarrhea observed typically occurred late in treatment and responded poorly to antimotility medications and empiric antibiotics. Corticosteroids were used in some cases to manage this toxicity in clinical trials, with enteric budesonide used most commonly. If severe idelalisib-associated diarrhea or colitis is suspected (≥7 stools/day over baseline), initiation of budesonide and interruption of idelalisib is recommended until complete resolution of diarrhea. Recommended dosage of budesonide is 9 mg orally once daily or prednisolone 1 mg/kg orally or intravenously (if unable to tolerate oral), with tapering when diarrhea returns to grade 1.11,12

Fatal cases of pneumonitis have occurred in patients treated with idelalisib. The FDA-approved labeling of idelalisib recommends prompt evaluation for symptoms such as cough, dyspnea, hypoxia, interstitial infiltrates, or oxygen saturation decrease of more than 5%. Idelalisib therapy should be interrupted for suspected pneumonitis, and if confirmed, corticosteroids should be initiated, as appropriate.11

Currently, first-line therapy for the treatment of CLL includes a combination of chemotherapeutic agents and monoclonal antibodies that target cell-surface antigens. In patients with treatment-naï ve CLL, the combination of fludarabine, cyclophosphamide, and rituximab (FCR) results in ORR greater than 90% and complete responses of 44% to 70%.13,14 However, if patients have relapsed/refractory disease and are unable to tolerate additional courses of chemotherapy, idelalisib offers an alternative, effective, and safe treatment option secondary to ibrutinib. Ibrutinib, an irreversible inhibitor of Bruton's tyrosine kinase (BTK), is an alternative agent recently approved by the FDA for patients with previously treated CLL. Ibrutinib was initially granted accelerated approval for the treatment of relapsed mantle cell lymphoma (MCL) in November 2013; in February 2014, the FDA granted accelerated approval of ibrutinib for the treatment of patients with CLL that has recurred after at least 1 prior therapy.15 In July 2014, ibrutinib gained expanded approval for the treatment of CLL in patients with chromosome 17p deletion, based on a phase III study of 391 patients.16 In this multicenter, open-label study of ibrutinib compared with ofatumumab in patients with previously treated CLL, ibrutinib significantly improved PFS (not reached vs median 8.1 months; P <.001) and OS rates (42.6% vs 4.1%; P <.001).17 At 12 months, the OS rate was 90% with ibrutinib compared with 81% with ofatumumab. A total of 63% (122/195) PRs were seen in the ibrutinib group versus 4% (8/196) in the ofatumumab group. In addition, a subgroup analysis of patients with chromosome 17p13.1 deletion showed similar results with ibrutinib.

Preclinical data in MCL have shown that specific BTK mutations that led to ibrutinib resistance also enhanced PI3K dysregulation.18 PI3K inhibition in the same ibrutinib-resistant model was able to restore the cell-line cytotoxicity. In a separate experiment, ibrutinib in combination with idelalisib produced strongly synergistic inhibition of the lymphoma cell line.19 The likely rationale for the synergistic effect is because ibrutinib and idelalisib both target the B-cell receptor signaling through different mechanisms. These data taken together suggest that in ibrutinib-resistant patients, idelalisib may still prove to be an effective therapy, and that combination idelalisib-ibrutinib might be explored in the future.


Mechanism of Action and Resistance

PI3K phosphorylation activates the serine/threonine kinase AKT, which then activates mammalian target of rapamycin (mTOR). PI3Kδ (isoform p110δ) is a central lipid kinase in the development and function of normal B cells. Overactive signaling of PI3Kδ has been shown to increase proliferation, survival, and migration of malignant B cells into lymphoid tissues.20 Idelalisib is a selective small-molecule inhibitor of PI3Kδ compared with α, β, and γ isoforms.11,21

Better knowledge and familiarity with targeted therapy have led to increased understanding of the development of resistance. Idelalisib resistance has not yet been fully characterized, although research is currently under way to explore this subject. Proposed mechanisms include upregulation of alternative PI3K isoform enzymatic cascade through p110α,22 activation of an "escape" oncogenic pathway such as RAS-RAF-MEK-ERK-MAPK cascade and amplification of MYC,23 and increased upstream signaling that overwhelms the competitive inhibition.24 Rational combination therapy with agents of different mechanisms of action may ultimately be necessary to improve efficacy and overcome resistance. Future directions for overcoming resistance may also include patient selection using predictive biomarkers of response.

Idelalisib is approved for relapsed CLL in combination with rituximab; for FL in patients who have received at least 2 prior systemic therapies; and for SLL in patients who have received at least 2 prior systemic therapies. The FDA-approved, recommended starting dosage is 150 mg orally twice daily without regard to food. Tablets should be taken whole and within 6 hours of scheduled dose if missed. If a dose of idelalisib is missed by more than 6 hours, patients should skip the dose and restart at the next scheduled administration time. Dosing of idelalisib should be adjusted for any toxicities, and permanently discontinued for anaphylaxis, life-threatening diarrhea, or other life-threatening toxicities that recur during rechallenging. Toxicities that require dosing adjustments or interruption of idelalisib include neutropenia or thrombocytopenia, diarrhea, symptomatic pneumonitis, or hepatotoxicity. Idelalisib should be stored in its original container at room temperature (68°F to 86°F) and away from the reach of children. In addition, idelalisib should not be cut, crushed, or altered.11

However, until data are released for patients with untreated CLL, FDA indications for the use of idelalisib are limited to relapsed/ refractory CLL, SLL, and FL.